Fridays with Fred: A bird’s-eye view of Beloit

Take a look at old Beloit and Beloit College from an aerial view.

A Beloit College student walking a dirt path circa 1875 might pause for a moment, watching the smooth glide of a red-tailed hawk high above and wonder about that bird’s-eye view of campus. Unless there was a resident balloonist among them, it would take college folk another 50 years to find out.

Apparently no true aerial view of Beloit College exists prior to an oversized framed photograph from 1924, discovered at an estate sale a few years ago. In the 19th century, photographers wanting a panoramic view of the campus hoisted their cumbersome equipment and climbed to the cupolas of nearby First Congregational Church or Strong School. A mapmaker might employ survey drawings and personal observations to create a “view from above” such as this rendition dating from the mid-1870s. With the college’s importance to the city in mind, Beloit later named First Street after Professor Jackson J. Bushnell and Third Street after Professor Joseph Emerson. What we call South College was then serving as the Chapel. Many years later, the college moved its old South College to Central Avenue, where, once divided, it became two houses. Campbell Hall was North College. A small wooden gymnasium sat where the Smith Building stands today. 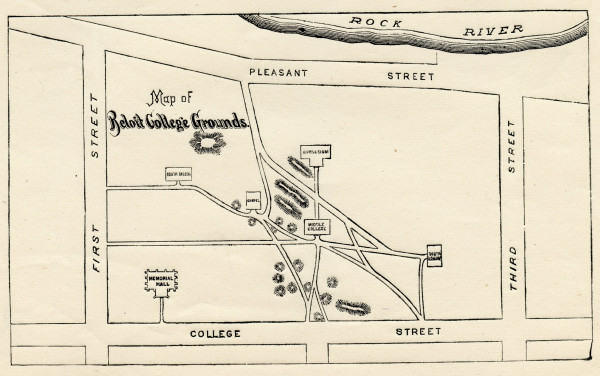 A lovely turn-of-the-20th-century view reveals neighboring houses with numerous outbuildings and laundry on the line. Middle College showed off its resplendent Victorian finery, which would last until a 1938 renovation. Pearsons Hall, Eaton Chapel, and Chapin Hall (next to Campbell) were relatively new buildings. In 1904 the old wooden gymnasium gave way to Smith Gymnasium and, a year later, the library moved from Memorial Hall to the newly constructed Carnegie (WAC). 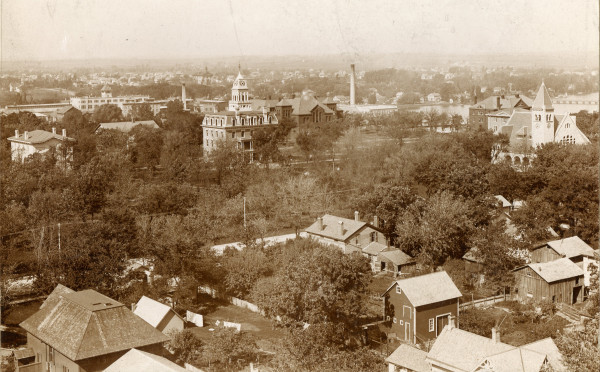 On Sept. 18, 1935, curious Beloit College students gazed upward as an “aeroplane” flew low over the campus. The aerial photographer captured the campus in all its arboreal glory, years before Dutch Elm disease destroyed some of the canopy. Tennis courts and the Smith Observatory, razed in 1969, stood in place of today’s Neese Theatre. Those little white posts, looking like bee skeps, were archery targets, a popular sport among women students. The college had not yet bisected the Pearsons quad with cement paths, but the aerial view reveals grass worn thin by students tromping to and from the buildings. Beyond old Chapin Hall, torn down in 1965, lay the future site of the Fieldhouse, then an overgrown field used for the most casual of intramural sports as well as the annual greased pole fight between freshmen and sophomore men. 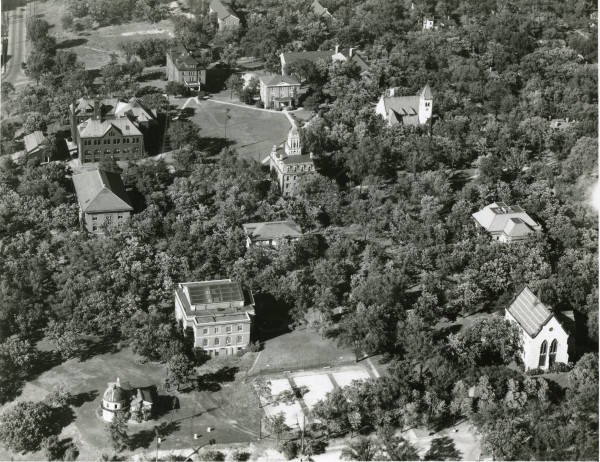 Cornfields, hayfields, extensive vegetable gardens and even a glass greenhouse surrounded Strong Stadium in 1935, only a year after its dedication. The old Beta Theta Pi house is the large structure at top, just left of center. 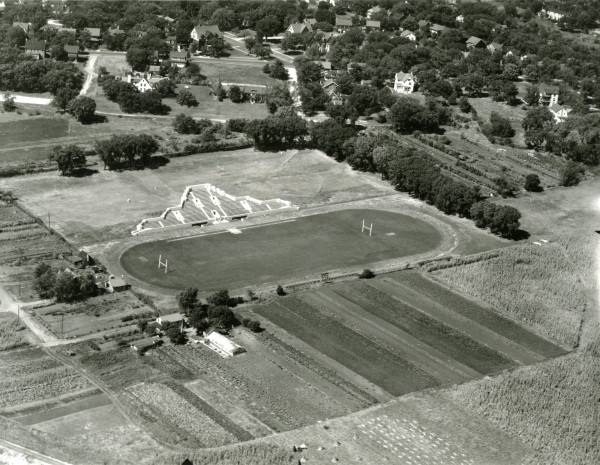 A proof photo from the late 1940s depicts the women’s residential side of campus, with newly constructed Aldrich and Maurer halls at center, and the much older 1890s Emerson Hall to the right, years before construction of Chapin, Brannon, and the ’64 residence halls. A much more industrial “Riverside Park” loomed just beyond college boundaries. At right, resembling an ancient castle turret, the 1880s-era stone water tower managed to outlast the “new” metal tower, erected in the 1930s. 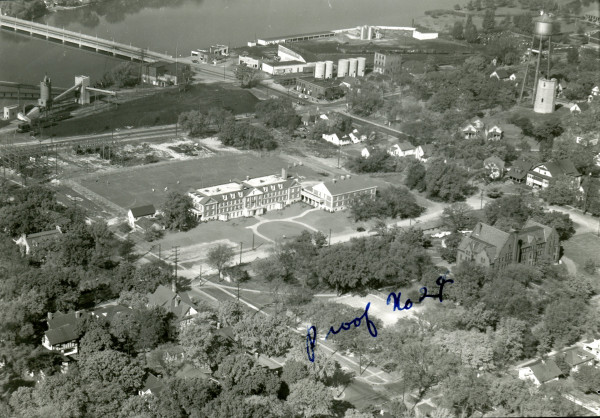 This 1950s view of busy downtown Beloit offers whole blocks of stores later replaced by single buildings or parking lots. The college’s Hendricks Center for the Arts, at lower center, was then the city’s post office and later the public library. Turtle Creek Books was once the thriving Hotel Hilton. The massive industrial complex across the river was the Beloit Iron Works, later Beloit Corporation, which closed in 1999. 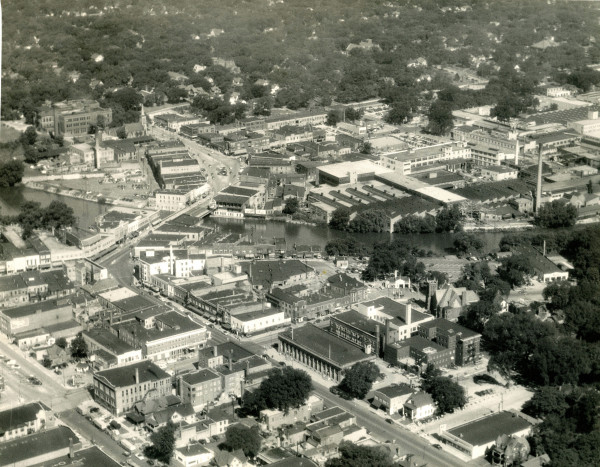 Morse Library was just a hole in the ground at the time of this 1961 aerial photograph, but dedication of the building was only a year and a half away. A traveler through Beloit could handily cut across campus by through streets, College, Prospect, and Emerson. The “Beloit 2000” riverfront project eliminated most of the buildings at left, except for the Brown Swiss building and St. Paul’s Church, which became the Angel Museum. 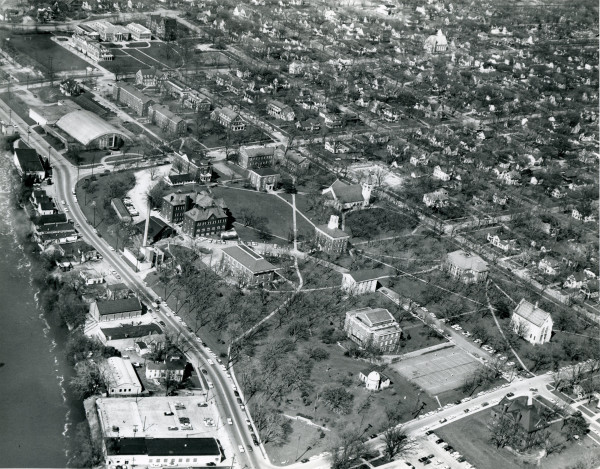 Forty-five years passed between our first and last aerial views. By 1980, many familiar buildings remained, but there were far fewer trees than in 1935. At first glance, however, the campus resembles what we know today. Look closer and find Morse Library with a different entrance. Chamberlin Science Hall, at center, replaced old Chapin Hall, before yielding to the Center for the Sciences. Within the next 30 years, the college would build the Sports Center and renovate Logan, Morse, Pearsons and Wright, while also adding townhouses and parking lots. In the 1980s and 1990s, Beloit 2000 would transform the riverfront across Pleasant Street. 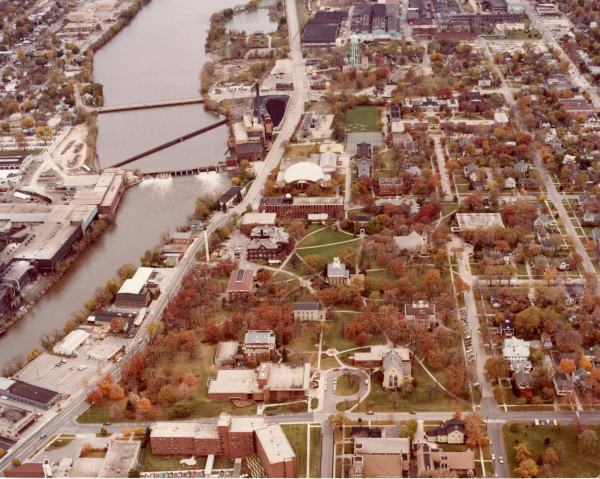