HomeLibrary & Information Technology Services Fridays with Fred: The birth of the art department

Fridays with Fred: The birth of the art department

The start of art at Beloit College.

“The history of the Art Department of Beloit College is like that of the College itself – a thought, a prayer, a seed hidden in the ground, the blade, the ear, the promise of the full corn in the ear.”

A student wandering in and out of the few Beloit College buildings in the mid-19th century might spot a portrait hanging here, a landscape painting hanging there, a small replica of Greek statuary placed on a cupboard or other haphazard artistic knickknacks all a jumble in dimly lit classrooms. The library at Memorial Hall featured a shelf or two devoted to classical art and architecture. A “College Cabinet”—including botanical, paleontological, geological, and archaeological specimens—provided an early foundation for what became the Logan Museum of Anthropology. However, any thoughts about expanding the college’s feeble collection of artwork had to wait until nearly the end of the century. First things first, a president or faculty member had to seek funds to keep this young and fiscally poor college of “the west” afloat. Construct needed buildings. Expand the student body. 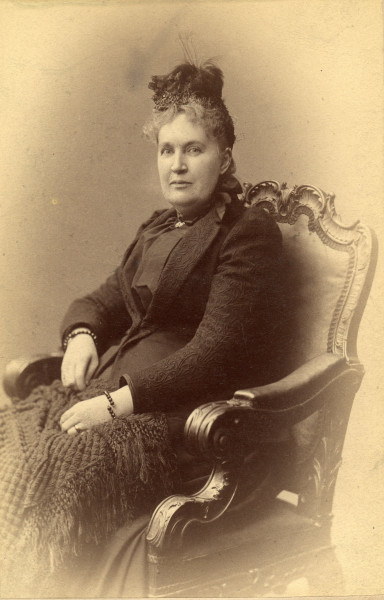 Longtime professor of Greek and college librarian Joseph Emerson married his second wife in 1884. From her youth, Helen Brace Emerson, pictured above, had an abiding passion for art, parlayed into decades of teaching, lecturing, and writing from her home in Evanston, Ill. She also became a collector, accumulating thousands of original etchings, watercolors, copies, casts, and photographs of famous artwork, ancient coins, and rare books. Joseph encouraged Helen to contribute to the cultural life of the college. She used her formidable powers of persuasion to convince President Edward Dwight Eaton to hire an art instructor. Then, at Commencement on June 22, 1892, Eaton announced that Helen Brace Emerson had donated her vast collection to the college. Helen timed her gift well. The college provided temporary quarters for the new art gallery on the lower floor of North College (Campbell Hall). With the recent construction of a larger college chapel (Eaton Chapel), the cream-colored brick South College, pictured above, stood empty. The Emersons, pictured below, set their sights on establishing an art museum there, and President Eaton concurred. Renovations created a spacious area for studio art on the first floor and a smaller room for the art library. The second floor would house the new museum gallery. In early 1893 the ever-growing collection moved to its new dwelling, and Helen earmarked May 24 as the art hall’s official opening. The date was chosen to honor the 45th anniversary of the arrival of Beloit’s first two professors, Joseph Emerson and Jackson J. Bushnell, both members of Yale’s class of 1841. 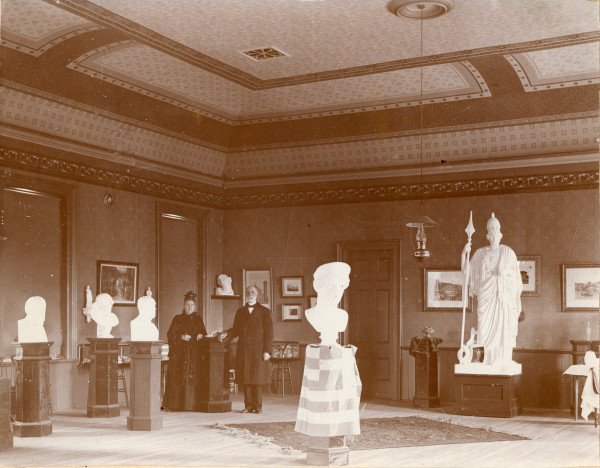 The glorious day arrived, and the 60 invited guests entered a large room decorated in the college’s colors, blue and gold. Paintings, engravings, and photographs adorned the once-bare walls. Large plaster casts, small busts, and statuary crowded every nook and cranny. Display cases brimming with pottery and ceramics huddled together along with everything else in a riot of Victorian-style clutter. A curious youngster pointed at the collection of sixty spoons, which the Round Table later explained were “gathered from all over the world, illustrating the development of the spoon from the spoon of the Esquimaux to the daintiest modern article.” The visitors sat down, facing two large, veiled objects, one draped with the Greek flag, and the program began. 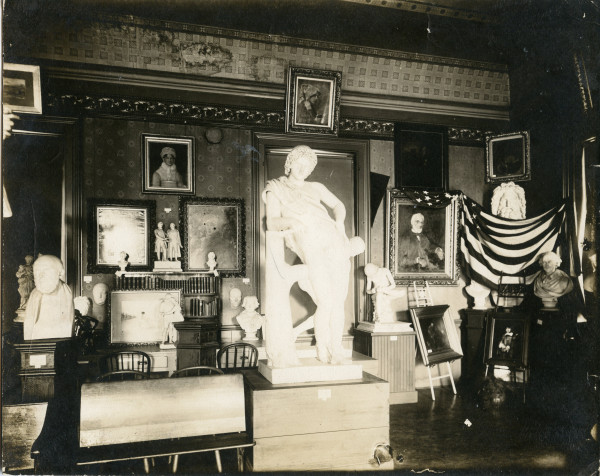 President Eaton invited Joseph Emerson to speak about the artworks and about the progress of this latest Beloit College venture. He called upon Jackson Bushnell’s daughter to unveil her father’s portrait, painted by the college’s art instructor, Lawton Parker, later known as an Impressionist painter and portraitist. Bushnell and Emerson’s Yale classmates had donated the portrait along with substantial funds for the new art library.

Helen Brace Emerson spoke next, describing some of her contributions to the newly formed art department and museum. Professor Emerson’s grandson Alvin lifted the Greek Flag and uncovered the other portrait, painted by German artist Caesar Philipp, which depicted Joseph seated at his desk. Helen was the donor. When Helen sat down, President Eaton’s father rose and offered prayer and then those assembled sang “Rock of Ages.” The Beloit Daily Free Press noted that after a blessing from Dr. Jeremiah Porter, “the company broke up into little parties about the room and enjoyed the dainty refreshments which had been prepared.”

The new “Art Hall” at South College provided the impetus for further gifts, including the famous Fisher Greek Casts from the World’s Columbian Exposition, the following year. Helen Brace Emerson, Beloit’s art museum pioneer and patron, devoted the rest of her life to art appreciation and education, serving as curator of the collections until her death in 1920.