HomeLibrary & Information Technology Services Fridays with Fred: Presidential sightings in the archives, from Fillmore to Nixon

Fridays with Fred: Presidential sightings in the archives, from Fillmore to Nixon

A look at some of the more famous letter writers and visitors of the college.

Riffle through files of routine correspondence and business documents and there, in between the response to a benefactor and a reply to a campus planner, sits a letter from a movie star or famous author, a great thinker or politician. Helen Keller, Arnold Toynbee, Ralph Waldo Emerson, Olivia de Havilland, Knute Rockne, Booker T. Washington. All wrote to Beloit or to Beloiters, and so did Presidents of the United States, although sometimes before or after their presidency. With next week’s presidential election in mind, we offer a selection of “presidential” documents from the Beloit College Archives.

Two years after the Civil War ended, Beloit College student Arthur Henderson Smith, class of 1867 (later a prominent author and missionary to China) began to compile an autograph album. Among its many treasures are three presidential signatures: 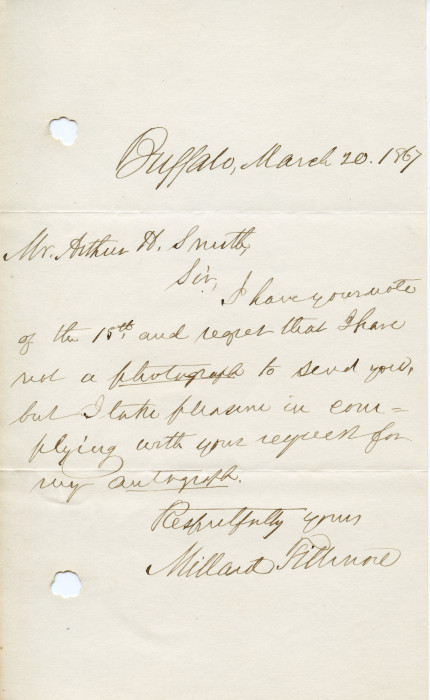 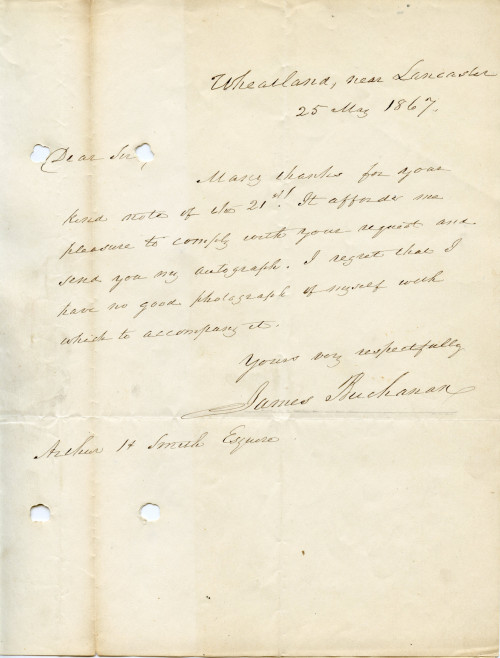 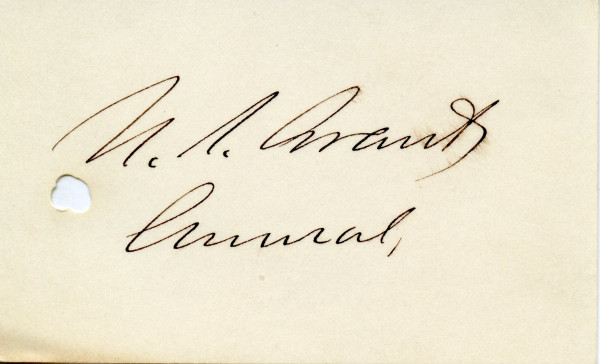 Beloit College President Irving Maurer had pastored Calvin Coolidge’s church and maintained a friendship with Coolidge over the years. While serving as 30th President, Coolidge invited Maurer to the White House as an overnight guest. The letter dates to a year and a half after Coolidge left office. 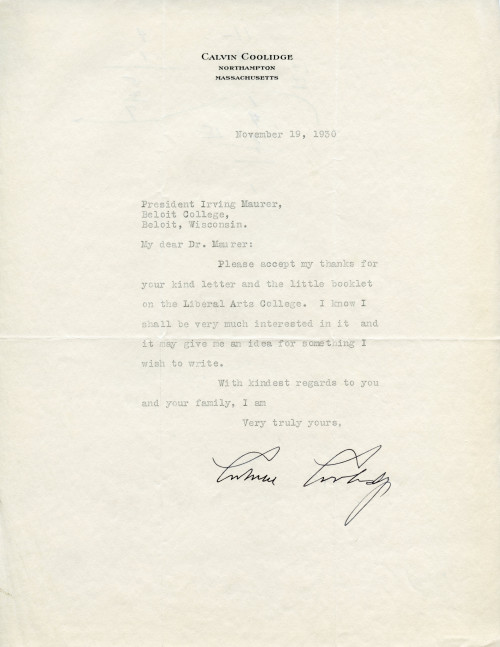 President Maurer gladly complied with this appeal from Herbert Hoover, written three years before Hoover became 31st President. “Scientific research should be as important a consideration in the educational program of a small college as it is in the fields of a university,” Maurer began, going on to say that he welcomed “the possibility of greater resources for research…” 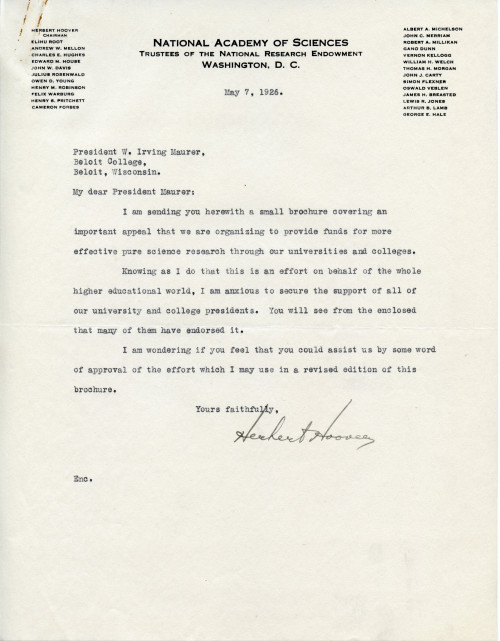 On May 22, 1933, President Maurer wrote to 32nd President Franklin D. Roosevelt, praising his speech to Congress in favor of disarmament. “I am convinced,” Maurer wrote, “that you will find genuine support on the part of the people in any step which your representatives may feel called upon to take in both the Disarmament Conference and in the approaching Economic Conference which will put the leadership of America definitely on the side of constructive peace relations…” 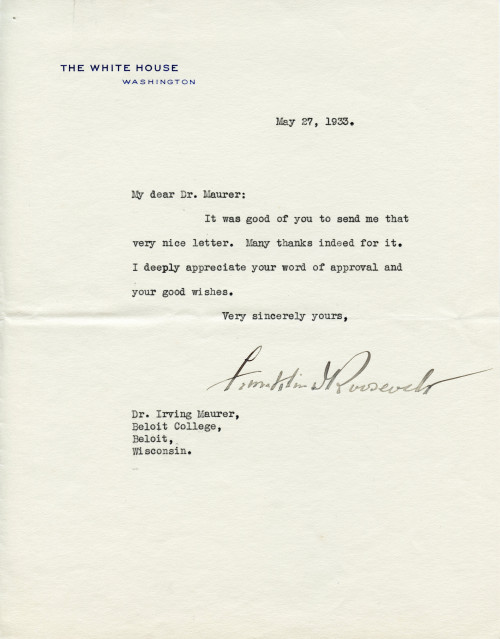 Richard Nixon visited Beloit and Beloit College a few times in the 1950s and ’60s. Ace Beloit College News Service photographer Ray Metzker was on hand in 1952 to snap a photo of the Vice Presidential hopeful donning a Beloit letterman’s sweater, as Nixon’s wife Pat beams in the background. 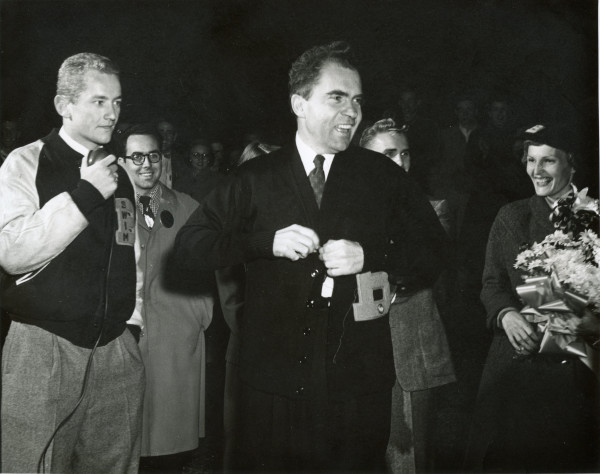 During the presidential race in 1959-1960, Nixon did not visit Beloit College, unlike his opponent, John F. Kennedy. Beloit College President Miller Upton, however, was a distinguished guest at Nixon’s grand opening of the new Beloit Boy’s Club. 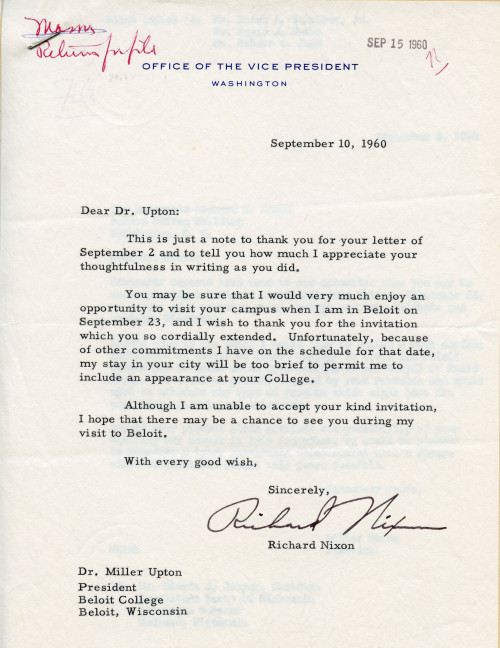 When Nixon campaigned again in 1968, he spoke before a huge crowd at the Beloit College Fieldhouse. That year, Miller Upton served as co-chairman of the Wisconsin United Citizens for Nixon-Agnew. Pat Nixon, Miller Upton, and his wife June are among the dignitaries on stage. A banner to the right of the soon-to-be-37th President reads, “Nixon Save My Chastity.” 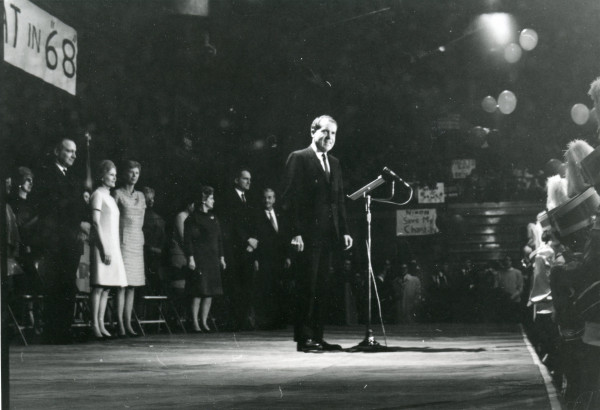 George H.W. Bush, former CIA director and former envoy to China, was a personal friend of Beloit College President Martha Peterson. Long before he became 41st President, Bush visited Beloit in February 1978, where he talked with students and faculty, gave a public lecture entitled “Perspectives on China,” and stayed overnight at the President’s House. An article in the college magazine commented, “Bush, a former Texas congressman, admitted having political ambitions, but declined to be specific.” 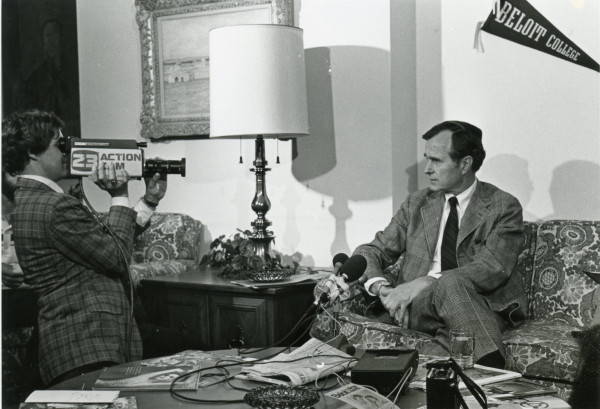 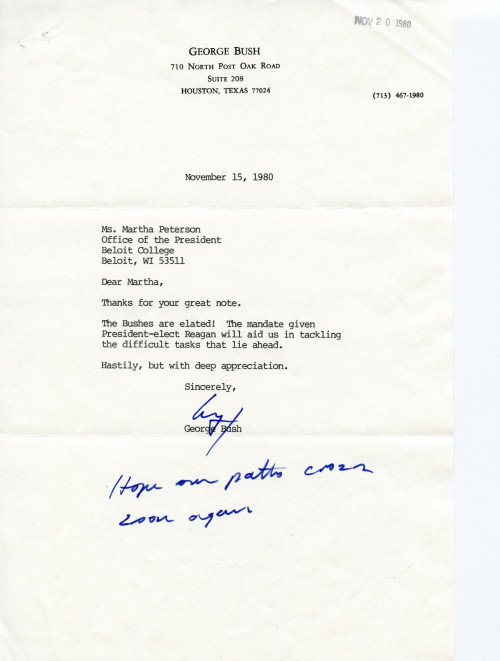 Although Bill Clinton never visited Beloit College, the 42nd President took the time in 1999 to sign a congratulatory proclamation in honor of “YOTA,” the college’s Year of the Arts festival, which encompassed theatre, music, art, museums, writing, and creativity. 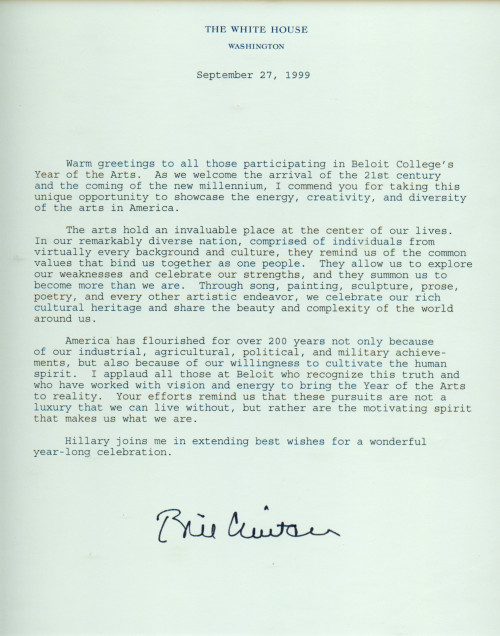 Several other presidential signatures reside in the Beloit College Archives, scrawled on letters, proclamations, and land deeds. Perhaps others await discovery, long ago slipped into an unassuming manila folder by a secretary after routing to college officials. We’ll keep our eagle eyes open.