Fridays with Fred: Beloiters in action in this 1938 photo spread

Almost from its inception, Beloit College employed a variety of promotional literature to attract students, beginning with plain flyers known as “circulars” and moving on to more elaborate, illustrated booklets.

In 1938, the college issued an oversized booklet featuring a new concept. Instead of static views of campus buildings, a photographer caught Beloit students in action, illustrating campus life in the classroom and in dormitories. Here is a selection of some of the many images found in the booklet, along with quotations from its text.

The cover photograph depicted the relatively new Morse-Ingersoll Recitation Hall, complete with a dog sunning itself in the distinctive archway. 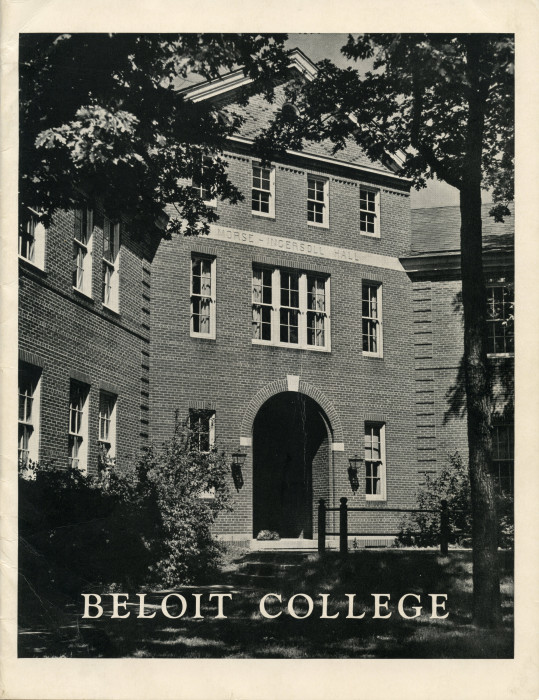 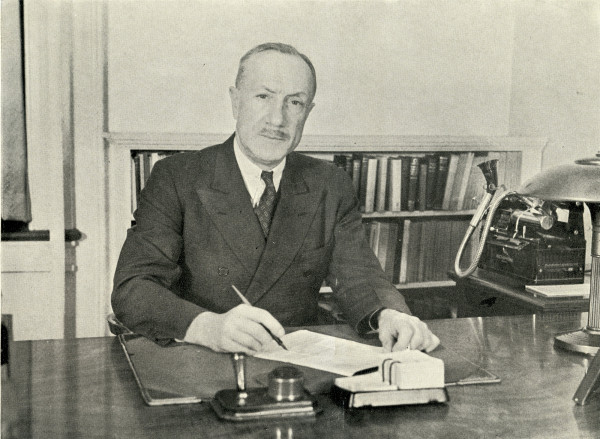 Between classes, students congregate at the Morse-Ingersoll arch on a crisp fall day, with Campbell Hall, then known as North College, in the background. 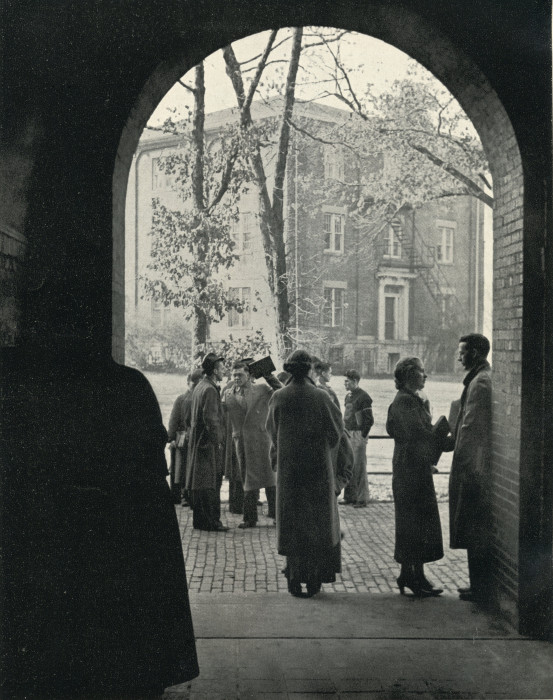 “The Carnegie Library [WAC] is in constant use all day and evening.” For many years, men and women used separate reading rooms for study. Two of the study rooms, known today as North Lounge and South Lounge, underwent renovation over the summer of 2012 and retain some of their original features, including stained-glass windows. 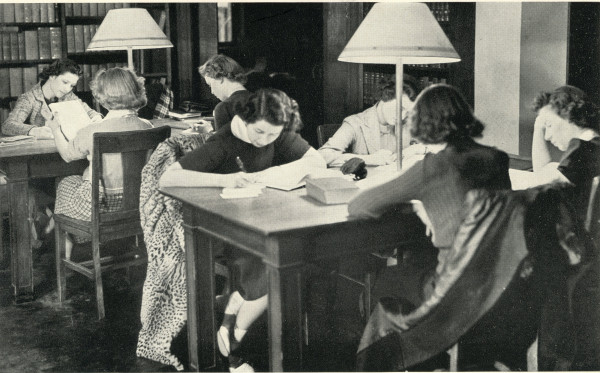 “The Round Table is ‘put to bed.’” Founded in 1853 as the Beloit College Monthly, by 1938 the newspaper appeared twice a week and featured a staff of 50 students. “This is entirely student-managed and written, there being a minimum of faculty control.” 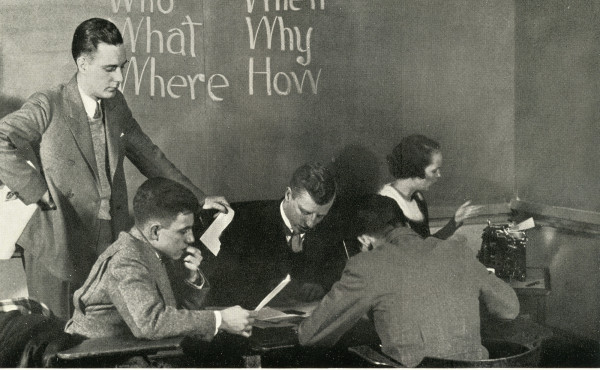 “For the musical, there is the Vesper choir and the college band…there are other musical activities, some involving the use of the splendid Capehart reproducing machine in possession of the College, together with hundreds of recordings, the gift of the Carnegie Foundation.” 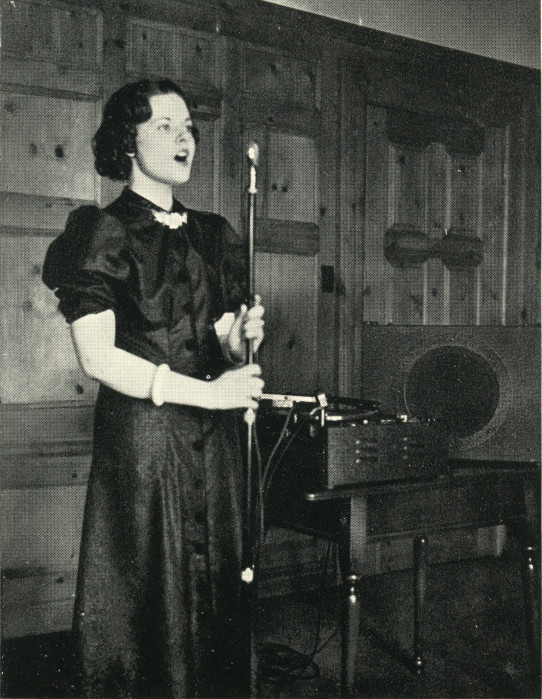 “A professor and a student study their finds in the Southwest.” Using a bit of early Photoshop-style magic, the publication’s editor spliced together a photo of ceramics and skull with the photo of the two men to create a nearly seamless image. The guide devoted two pages to anthropology, touting Beloit College’s unusual undergraduate programs in the field as well as its world-class Logan Museum. “Few universities, even, offer the work for undergraduates which is available at Beloit…” In the 1930’s students spent several weeks each summer on expeditions in New Mexico. 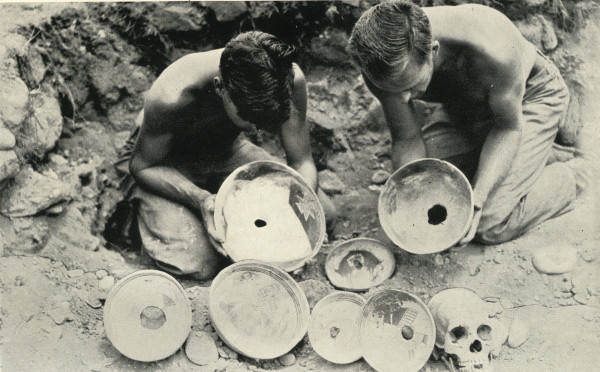 “A tense but comic moment in a student play.” The Beloit Players put on a few major productions each year at the theatre in Scoville Hall, across the street from present day Neese Theatre. 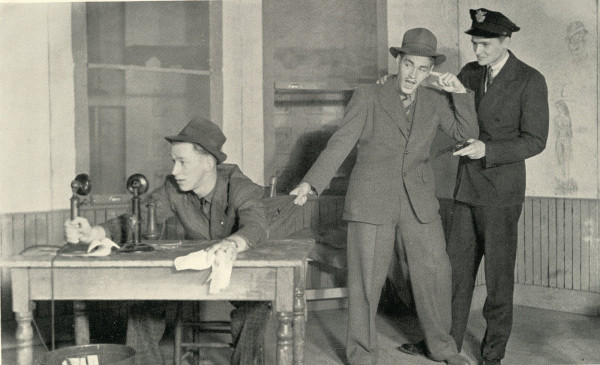 Students lounge in a single room in Chapin Hall, a dormitory for 65 first-year women. Chapin, built in 1891, stood to the left of Campbell Hall until 1965 when it made way for the Thomas C. Chamberlin Hall of Science. “Rooms are painted soft shades of green, smoky rose, yellow, peach, coral, blue, and maize. Furnished for each occupant are a dormitory bed, study table, study chair, upholstered arm chair, bookcase, mattress, and pillow. Furniture is painted in harmonizing shades.” 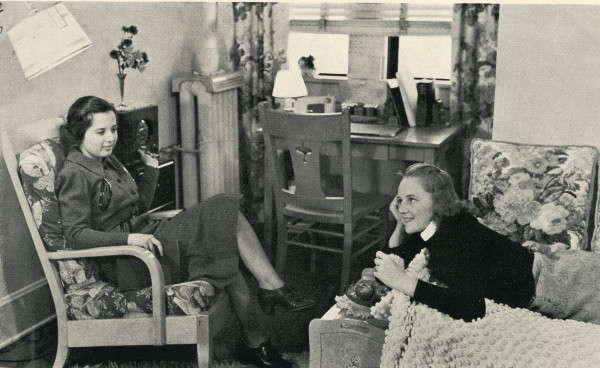 “Football practice at Hancock Field, Strong Stadium in the background.” Strong Stadium was a new facility, dedicated on Oct. 13, 1934. The 1938 “Blue Devils” went 3-3-1, including an impressive 20-7 victory over Carleton College. 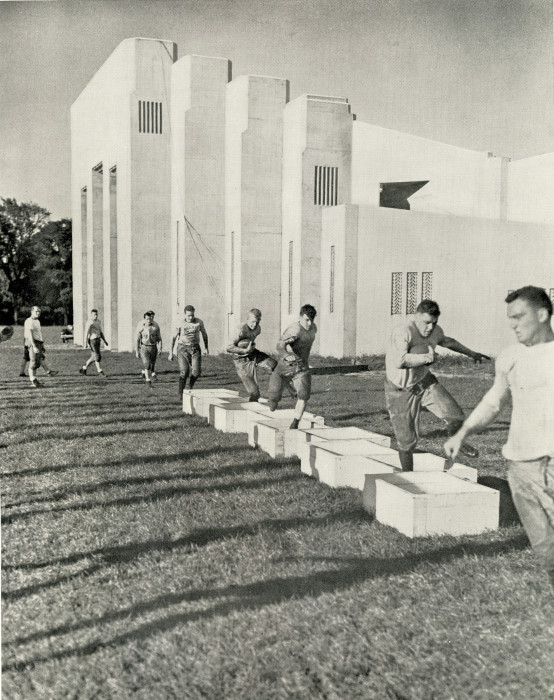 “Men and women alternate in their use of the pool in Smith Gymnasium.” After the college added a natatorium to its Field House in 1956, they filled in Smith’s pool in preparation for a new student union, which opened in 1957. Remnants of the green and white mosaic tile still exist in a storage area behind the college’s print shop. 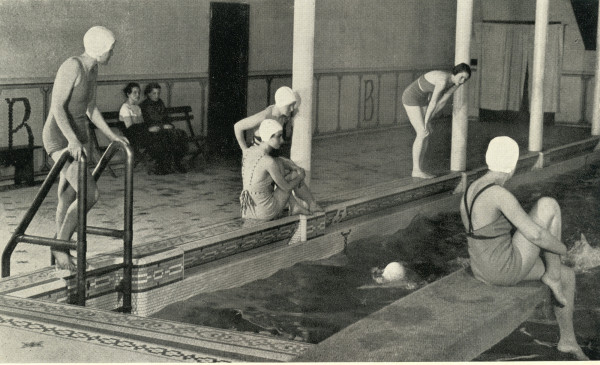