The demolition of Scoville Hall and a brief history.

Scoville Hall, May 1973. Footsteps echo down darkened, gloomy hallways, into and out of empty classrooms. A few art students hole up in obscure rooms, hurrying to finish last minute projects. On the second floor, dusty props and costumes accumulate mildew. In disused closets and in abandoned classrooms, scraps of paper and other debris lie unheeded on worn floorboards. Cobwebs stretch spookily in the dim light filtering through cloudy windows. An old, tired building awaits the wrecking ball. 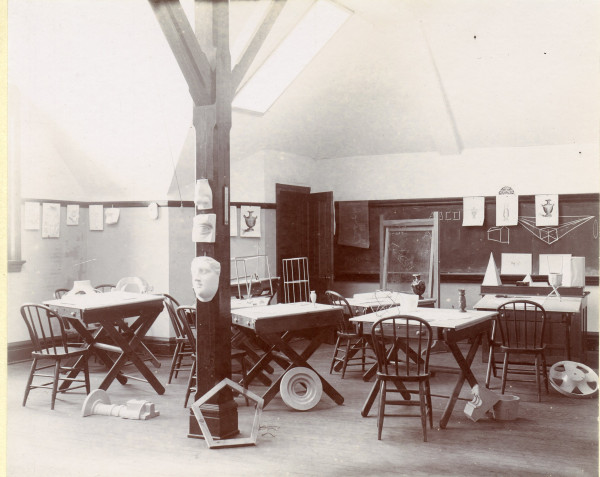 It wasn’t always so. Back in 1888, Beloit College was in the midst of an admissions boom, with a goodly increase in its student body over previous years. The Beloit Academy, the college’s preparatory department, witnessed unprecedented growth with over 100 more students than ten years before. As President Edward Dwight Eaton surveyed the crowded conditions of the campus, he knew that expansion was necessary, if only he could find a donor. 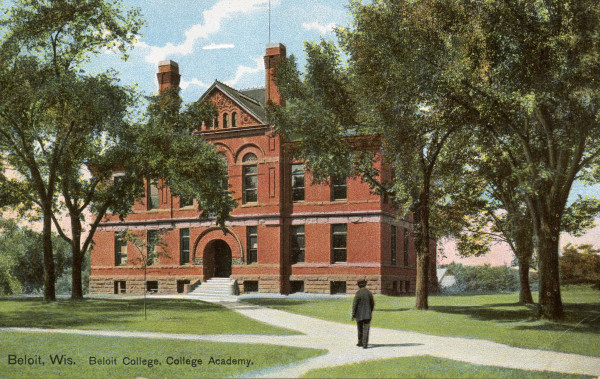 Enter James W. Scoville, a wealthy entrepreneurial businessman from Oak Park, Ill., whose friend, Reverend Doctor G.S.F. Savage, was a longtime trustee of Beloit College. Scoville was well aware of Beloit and, as a young man in 1848, had literally walked from Chicago to Beloit because of his interest in the new college. Eaton met with Scoville, explained the college’s needs, and showed him preliminary plans for a new academy building. Scoville offered $25,000, provided the college procure another $10,000 from the city of Beloit as an endowment for the building.

James W. Scoville and his son Charles were present at the laying of the cornerstone on October 28, 1889, where those assembled heard speeches, poems, and prayers from President Eaton, Mayor D. S. Foster of Beloit, Professor William Porter, and others. Finally, President Eaton rose and introduced James W. Scoville, Esq. who stepped forward to lay the cornerstone, which held a strongbox brimming with campus and city publications. Students roared the “college yell” and the crowd cheered. 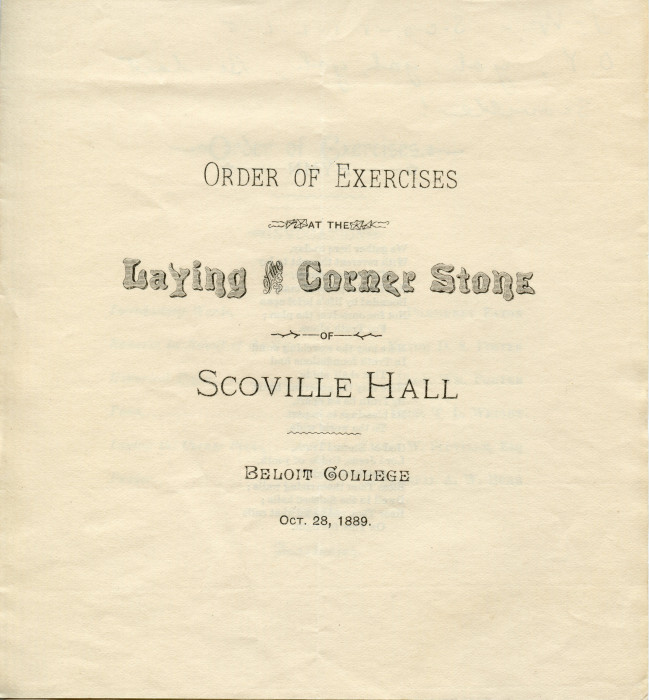 Over the ensuing months, passersby witnessed an imposing structure begin to dominate the hill. Patton & Fisher designed Scoville Hall in the popular Romanesque Revival style with a façade featuring deep-red brick trimmed with brown stone and terracotta in fancy designs. There were two main floors for classrooms and assembly, a prayer room and rooms for student societies. An expansive basement held a chemistry laboratory and two carpenter shops, while the attic included a drawing room and a band room among others. Four gables adorned the roof and their windows provided attention-wandering students a birds-eye view of campus and city.

As a Beloit Daily Free Press reporter commented, “Its appearance…will be one of beauty combined with a stability and massiveness.” Professor Rollin D. Salisbury ’81 also lavished praise in a letter to fellow alumni: “As the ‘first fruits’ of the New Era, stands Scoville Hall, crowning the very Acropolis of its College precincts, a structure of pressed brick and brown-stone trimmings that will impress you as the embodiment of substantial elegance.” 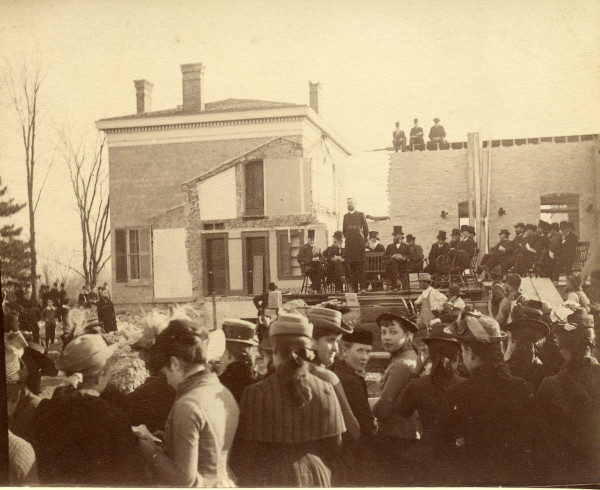 James W. Scoville returned for the dedication ceremony, held following Commencement on June 25, 1890. After music by the college band and an invocation by President Eaton, Trustee Anson P. Waterman announced to the crowd that the college had stayed within their $25,000 budget, spending exactly $24,993. The college used the remaining seven dollars to purchase and erect a flagpole on the Scoville lawn.

Scoville Hall served as the home for Beloit Academy until 1910, when the college closed its preparatory department. For a time, the building stood empty, but gradually students and faculty made good use of it. The Student Army Training Corps set up barracks at Scoville in 1918 and that same year the college utilized the second floor as an infirmary during the influenza epidemic. By 1920 Scoville housed the music department; the Round Table staff also found a home there. In 1925 the college offered the building to Beloit for $65,000 with use as a city hall in mind. However, after a couple of months of dickering, the city turned them down, citing excessive remodeling costs. Then, in 1926, fire gutted the second floor. Seizing an opportunity for a proper performance venue at last, the Beloit College Players moved in, remodeling the damaged floor into what the 1927 Codex described as, “a very modern structure for dramatic productions.” The Education Department also took up residence and founded the Burr Training School, which through the 1930’s provided Beloit College students an opportunity to teach local schoolchildren right on campus. In December 1948, WBCR-AM broadcast its inaugural program from the basement of Scoville Hall. 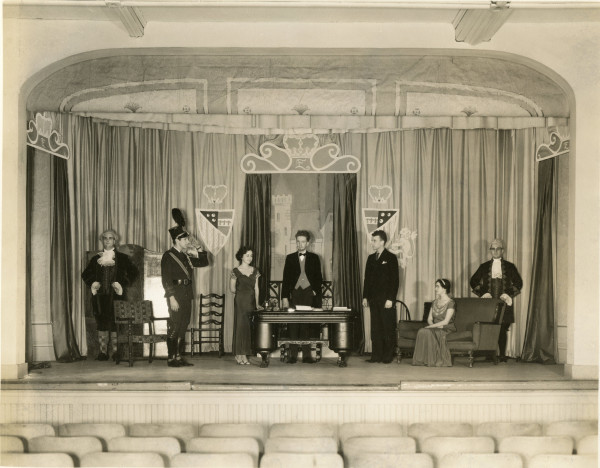 Scoville continued to serve its various functions for another 25 years. The records don’t reveal exactly when, but somewhere along the line, the city condemned the building. That didn’t stop the college from using it, however, but it meant that the public could no longer crowd into the small theater on the second floor. The college planned a new theater, which eventually became the Neese.

For years, students and faculty enjoyed commiserating over Scoville’s decrepitude—the floods from leaky pipes, the frigid drafts blowing through hallways, and the startling encounters with bats and birds fluttering through empty rooms. WBCR moved to Haven Hall at the end of 1972 and the art students left soon after. Then the theatre department moved the last of its props and costumes out of second floor storage and the building closed for good.

Scoville Hall had one last task, though. In June 1973 the Beloit Fire Department set off smoke bombs to simulate fire. New recruits propped ladders against Scoville’s still-rosy bricks and scrambled up to try out specialized equipment. Then, at the end of July, a demolition crew arrived, swung the wrecking ball, and bricks and mortar and stone began tumbling down. A gaping hole exposed a classroom with its blackboard still hanging tight, where some recent invader had scrawled in white chalk, “Help! I’m trapped behind this blackboard!” 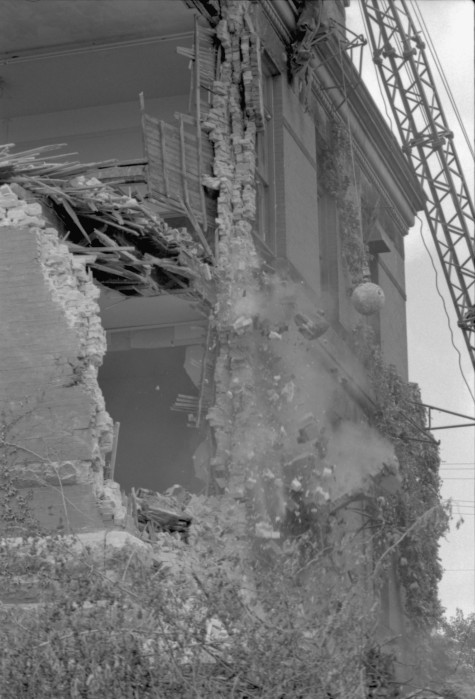 The site lay empty until 1977, when a new 150-unit elderly housing project arose. The massive structure, featuring two six-story towers on different levels, assumed the name Scoville Center Apartments. A couple of decorative remnants of old Scoville Hall remain, however, embedded in the main hallway at the Neese Theatre.