Another publication that represented student life.

Last week we examined an official Beloit College publication, the Beloit College Catalogue of 1862-63. Students of that era may have felt that the catalogue did not adequately represent student life, or perhaps they wanted something tangible celebrating their activities during an unsettling and too-often tragic period of war.

Whatever the case, in the fall of 1862 they obviously had publications on their mind, reviving the Beloit College Monthly, which had been on hiatus since April of 1861 after continuous publication since 1853.

In the “Editor’s Sanctum” column of their November 1862 issue an editor described the situation:

“While the financial troubles of our country cannot but affect the College; and while so large a proportion of the students are in the armies of the Union; still, the various enterprises undertaken for this College year would indicate greater activity than for many years past…This is no small undertaking, all things considered.” 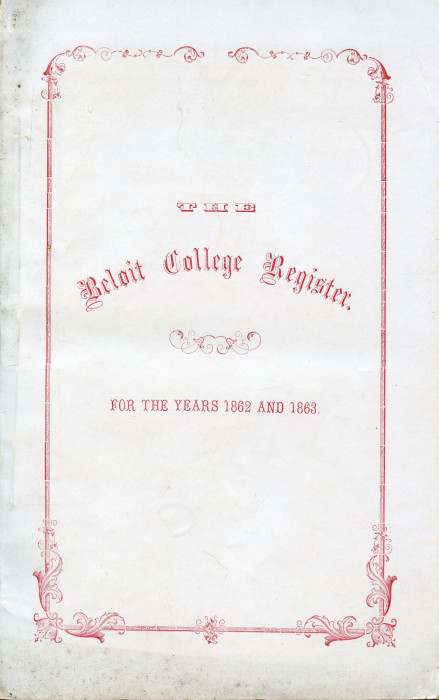 Among those activities, the Archaean Union, a union of the college’s two literary societies prepared a new publication, the Beloit College Register, published that fall and “printed by steam at the Daily Gazette Job Office” in Janesville. With its bright white wrapper decorated with fancy red trim and featuring an elaborate typeface, the new 32-page publication outshone its staid cousin, the Beloit College Catalogue. An editor boasted:

“For the first time in the history of Beloit College, its students have ventured to present to the friends and patrons of the Institution a Society Catalogue. Although this land of Free Institutions – free, we say, because by the humane proclamation of our Chief Magistrate the fetters are nominally stricken from the slave – is rent with internal war, yet the College is still a living, acting element, marching forward, in times of war as in times of peace, in the vanguard of civilization.”

“Graduates and Undergraduates in the Army” took precedence among the Register’s numerous lists. Students and alumni served in many Union regiments and in many capacities, from privates to majors, including musicians, a commissary sergeant, and an aid to General James D. Morgan. Alongside names, stark notations served to bring the realities of the war closer to home:

Students were quite proud of their literary societies, the Delian and Alethean, which battled each other at public debates and together created the Archaean Union library, at that time rivaling the college library in number of volumes. The Archaean Union also sponsored public lectures by visiting speakers. The Register listed the year’s speakers and their topics, which ranged from “Switzerland” to “Eyes” to “Heresy” and included, of course, the war. Famed abolitionist Wendell Phillips orated at length on “The War and the Way Out of It,” while politician Edward Everett, who spoke before Lincoln at Gettysburg, addressed Beloiters about “The Origins and Character of the War.” 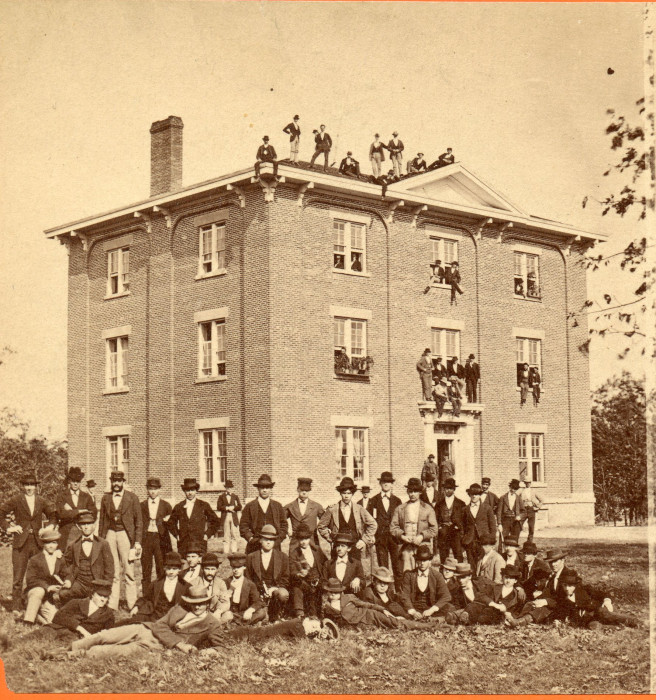 Public speaking was a major aspect of student life, from class recitations to festivals of oratory held before a 19th-century public conditioned to sit through lengthy speeches. The Annual Prize Declamations included, among others: “The Emancipation of the Irish Catholics” and “The Relations of Slavery to Our Nation’s Future.” Even more popular was the annual Junior Exhibition which featured Greek and Latin orations as well as many in English. Naturally, the War of the Rebellion was on their minds. Juniors declaimed about “The Inevitable Progress of Moral Conflicts,” “The Representative Character of our Present National Conflict,” “The Regenerating Influence of National Calamities,” and “The Value of International Sympathy.” However, Henry F. Chesbrough provided a little literary relief with “The Faithfulness of Shakespeare to the Law of Providence.”

Debates between the rival literary societies that year included a salve for classics-weary students: “Resolved: That the study of English Literature is more favorable as a means of mental culture than the Classics.” 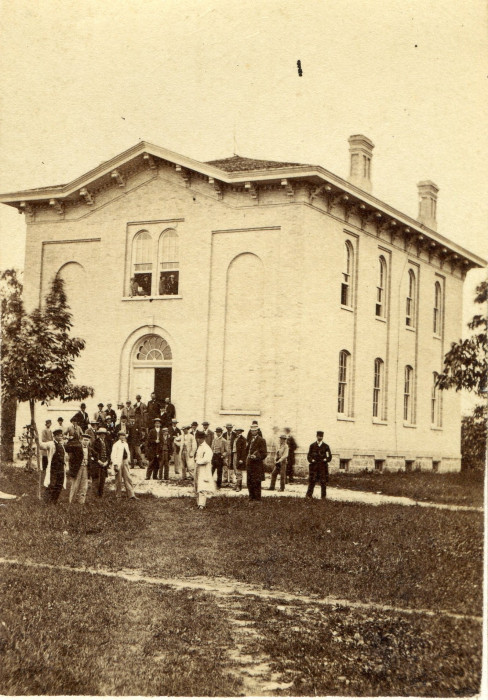 Following lists of Commencement speakers, missionary societies, choir, glee club, preparatory students, and their literary society, The Philagorean, the Register closed with the Society of the Alumni. Including 1862, the college had produced only twelve classes; the Register offered readers information about alumnus residences and occupations. Although there were plenty of teachers, editors, lawyers, and doctors, out of 75 alumni there were 18 clergymen, including the entire class of 1859.

Alumni, most originally hailing from Wisconsin and Illinois, had already begun to spread their wings across the nation and worldwide. James A. Brewster, class of 1854, flew the farthest, teaching at Honolulu in the Sandwich Islands. The Society of the Alumni also formed a committee of arrangements and appointed officers, an orator, and a poet.