HomeLibrary & Information Technology Services Fridays with Fred: Back when trustees outnumbered the seniors

Fridays with Fred: Back when trustees outnumbered the seniors

The Beloit College Catalogue of 150 years ago was a drab affair, printed in plain, pale green wrappers by the Journal and Currier Printing Office in downtown Beloit. A peek inside at its lists and statistics and summaries, however, yields unexpected nuggets that instruct, inform, and even entertain.

That year, students published a separate compendium, known as the Beloit College Register. (We’ll take a look at their work next week.) Here, then, are some gleanings from the Annual Catalogue of the Officers and Students of Beloit College for the Academical Year, 1862-63. 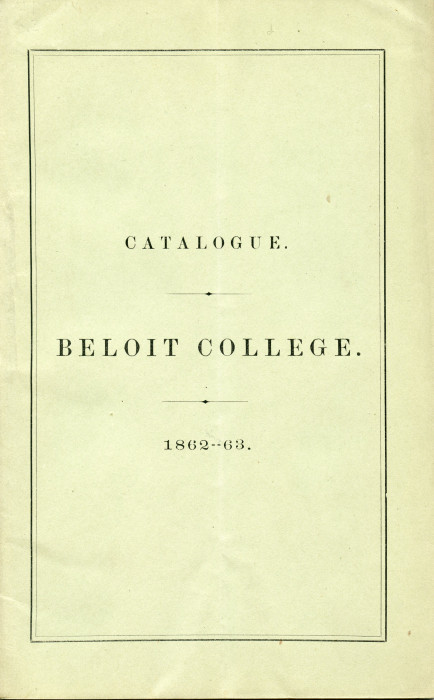 Admissions:
In order to enter the “Collegiate Department,” a prospective student had to have “completed his fourteenth year” as well as undergo examinations in “Geography, English Grammar, Arithmetic and Algebra to Quadratic Equations; in Andrews and Stoddard’s Latin Grammar, Sallust or Caesar’s Gallic War, Virgil and Cicero’s Select Orations; also in Hadley’s or Crosby’s Greek Grammar, and Colton’s or Owen’s Greek Reader.” The college also required “satisfactory testimonials of good moral character.”

Statistics:
There were 68 students in the college proper and 89 “Normal and Preparatory” students. Deducting those twice named, the college boasted a student population of 144, one more than the year before. All were men.

Twenty-seven students had left college and joined the United States Army to fight in the War of the Rebellion, then in its second year.

Tuition, Room and Board:
Tuition cost $30 per year. 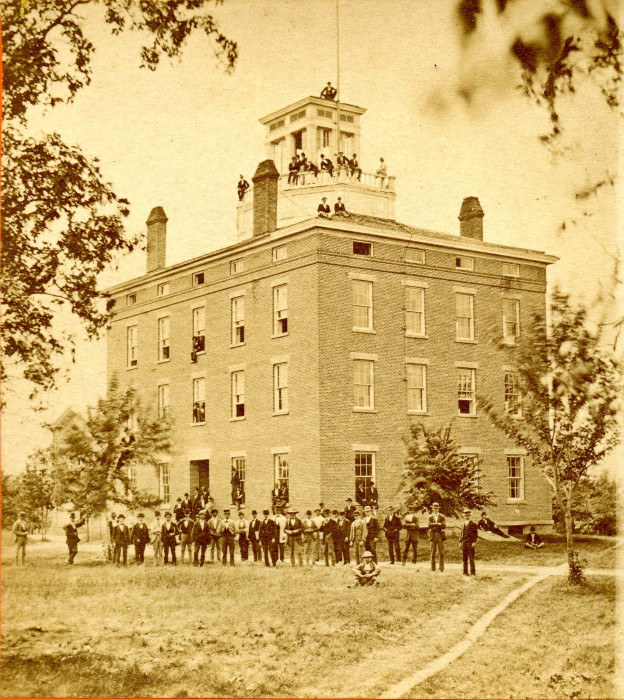 Professors:
Eight professors taught in the college and preparatory departments, among them such familiar names as Chapin, Emerson, Porter, and Blaisdell. Only one professor held a Ph.D. degree. Two held Doctor of Divinity degrees. All others held Artium Magister (A.M.) degrees. Professor specialties included, among others: civil polity, intellectual and moral philosophy, Greek language and literature, Latin language and literature, and natural philosophy. Professor Henry B. Nason was the only science professor, specializing in chemistry and natural science.

In order to move up the academic ladder and graduate, “at the close of every year, each class is subjected to a written examination on all the studies of the year.”

The college maintained two other academic departments on campus, overseen by a principal and taught by college faculty. The preparatory department prepared “young men to enter the regular college course,” while the normal department provided “opportunity for students who do not contemplate going through College, to perfect themselves in the English branches.” The normal department also emphasized the “theory and practice of teaching.”

Master’s Degree:
“Every Bachelor of Arts of three years or longer standing, may receive the Degree of Master of Arts on the payment of a fee of five dollars, provided he shall, in the interval, have sustained a good moral character.”

Outreach:
Every Wednesday, members of the student body spoke at the “Public Rhetorical Exercise” also known as “Public Declamations.” Individual classes also held declamatory exercises, inviting the public to witness original speeches based on their studies. 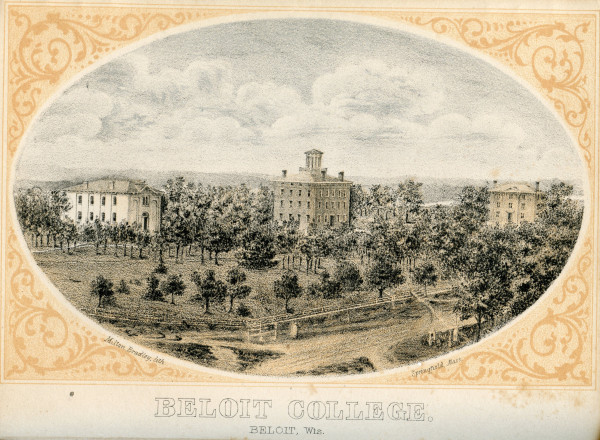 Books:
Students expected to pay between five and ten dollars per year for text books. Students who wanted to make use of the college library paid 25 cents per term. The library, housed in Middle College, contained between four and five thousand volumes. Members of the Archaean Union (a union of debating societies) and the missionary societies also had access to their libraries, “numbering nearly one thousand volumes.”

A Budding Museum:
Long before the college had anthropology and art museums, it had the College Cabinet: “The Cabinet of Mineralogy and Geology embraces about six thousand specimens…The Botanical collection of the College embraces more than three thousand species of plants, collected in this country and Europe. A beginning has been made, also, in gathering specimens of the birds of our own region.”

Financial Aid:
Eighty to 100 dollars per year was available “for aiding indigent students who have the ministry in view.” Students also sought such “labor as is conducive to health,” finding odd jobs on campus and in town.

Calendar:
In 1862, the fall term commenced on Sept. 3 and ran until Dec. 24 when students had one week of vacation. There was a further two-week vacation in April. The college held Commencement in 1863 on July 8. Summer vacation lasted two months.