HomeLibrary & Information Technology Services Fridays with Fred: Commencement cancelled in 1864, due to war

Fridays with Fred: Commencement cancelled in 1864, due to war

A look at one of the effects of the Civil War at Beloit College.

“In view of the fact that all the members of the Senior class have enlisted, together with large numbers of the other College classes, voted that the public Commencement be dispensed with for this year.” – Beloit College Board of Trustees Executive Committee minutes, May 14, 1864.

In late April 1864, Wisconsin’s governor James T. Lewis issued an urgent plea for more soldiers. With patriotic fervor, more than four-dozen college and prep students joined Company B of the 40th Wisconsin Infantry as “100 day men,” led by their captain, Salmon Merritt Allen, class of 1865. Professor J.J. Blaisdell accompanied the regiment as its chaplain. Eyeing a much-depleted student body, President Aaron Lucius Chapin called off the college’s annual Commencement ceremony. Regional newspapers applauded the move. An editorialist for the Janesville Gazette wrote: “For the first time since the first Anniversary in 1851, [Commencement] failed to come off, and the failure was a hundred-fold more creditable to the College than any Commencement exercises could have been.” However, the college made sure that each member of the class, including several “carrying muskets” at the time in Memphis, Tenn., received his degree in absentia.

After the great majority of Confederate troops surrendered in April 1865, many soldier-students returned to Beloit College and resumed their studies. Of the nearly two-dozen students originally in the class of 1865, only seven went on to graduate. Three died during the war.

Beloit College resumed its Commencement ceremonies that July, which included, among other activities, a baccalaureate sermon preached by Professor Joseph Emerson, a prize declamation contest, and a well-attended speech before the College Missionary Society. Wednesday, July 12, dawned clear and cool, perfect for Commencement day, held at First Congregational Church, crowded to its rafters with visitors from Beloit and the surrounding area. The ceremony began with music from a string and woodwind orchestra, followed by a prayer from Professor Emerson, filling in for the absent President Chapin. Each senior gave an oration touching on recent events of history or contemporary political philosophy. 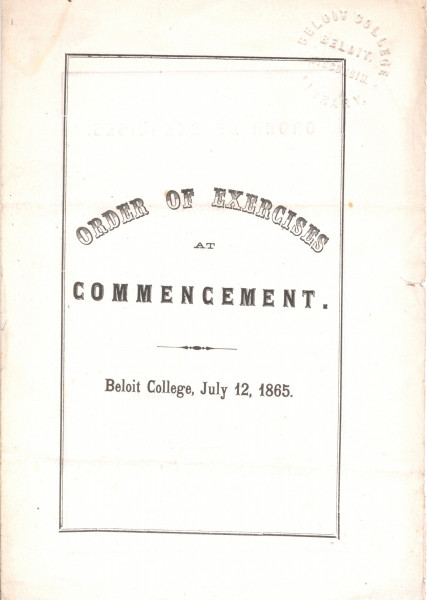 Eugene Beauharnais Dyke declaimed about “The Education of the American People by the Late War.” He also read the class poem, entitled “Peace.” A former soldier in an Iowa regiment, the late war was clearly on his mind.

“The speaking as a whole was decidedly creditable to the class and the college,” commented a Beloit Journal and Courier reporter. “The young men spoke with manliness, energy, and a good degree of self-possession.”

Dinner with speeches by professors, alumni, and other dignitaries followed the formal ceremony. Finishing up the evening, Joseph Emerson rose from his chair and surveyed the crowd. “Zeus,” as generations of students dubbed him, was still a relatively young man, but his commanding gaze hushed those assembled. He spoke about the challenges the college faced during the “late national conflict.” The many students who fell on the battlefield or succumbed to disease. The students who would never again hear the bell ringing them to morning chapel. And yet the college was proud of its record of service and gratified that “no graduate of the college had taken an attitude of disloyalty to the government.” Cheers greeted Professor Emerson—cheers that held notes of sorrow and of relief. 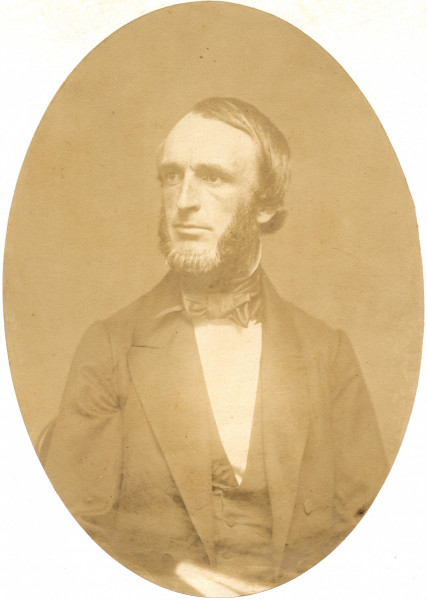 [From the Commencement Poem, read by Eugene B. Dyke, class of 1865]