Fridays with Fred: the photographs of Bob Miller ’50

A look at one of the famous photographers to come out of Beloit College, Bob Miller.

During the middle years of the 20th century, the Beloit College News Service featured two supremely talented photographers. Both pursued professional careers while students at Beloit, and both worked at a time when the college’s news arm publicized widely in national newspapers and magazines. Ray Metzker went on to become a famous art photographer; Bob Miller may have been less well-known, but he was a brilliant photographer in his own right.

Miller grew up in Fox Point and Cedarburg, Wis. He fell in love with photography in his teens, and in 1941 won first prize in a National Scholastic photography contest. After graduating from high school in 1942, he spent a semester at the University of Wisconsin-Madison and then joined the Army Air Corps, working as a photographer, also finding time to study under Ansel Adams at the Art Center School in Los Angeles. After the war, he entered Beloit College, where he studied chemistry and continued his photography career for the Beloit College News Service and for the Beloit Daily News. His outstanding work began to achieve recognition, with spectacular photographs of Beloit’s “Greased Pole Fight” appearing in Life magazine and through wire services picking up his photographs for publications nationwide. In 1949 he won first prize in the Advanced Professional News Photographers’ contest for a photograph of Strong Stadium.

After graduating in 1950, Miller set up a photography studio in Cedarburg, Wis., which he ran for several years before moving on to his longtime career as an auto dealer. He continued to take photographs, however, and returned to the college several times over the years for publicity shoots. He passed away on August 25, 2000.

A couple of years ago, his widow donated a few hundred prints and negatives from Miller’s Beloit period. His remarkable News Service photographs cover a wide variety of subjects, which provide a delightful glimpse into post-war Beloit campus life. With such an embarrassment of riches, it is difficult to choose a selection.

Here are a dozen:

Bob Miller and his wife Rae, ready for action. 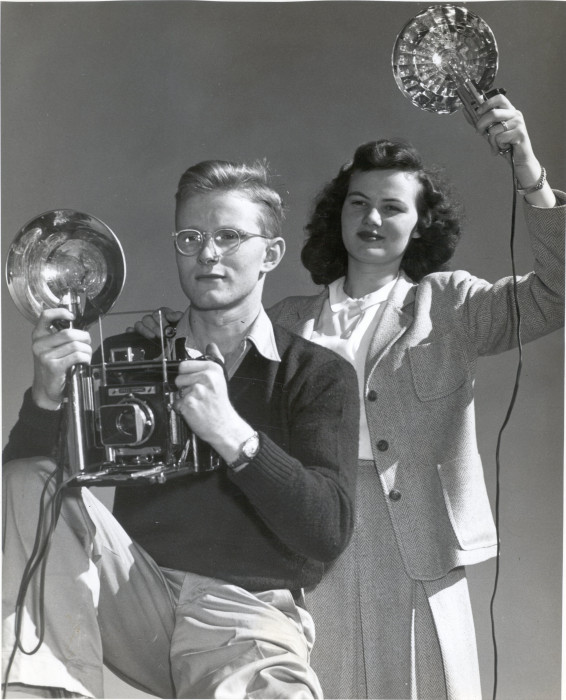 Original News Service caption, Fall 1950:Things are looking up for Beloit College football this season and here are the three reasons. The husky tackles, all weighing above 200 pounds, are (left to right) Don Folts, Beloit; Ted Anderson and Chick O’Neil, both from Chicago. (The team went 5-2-1 on the season.) 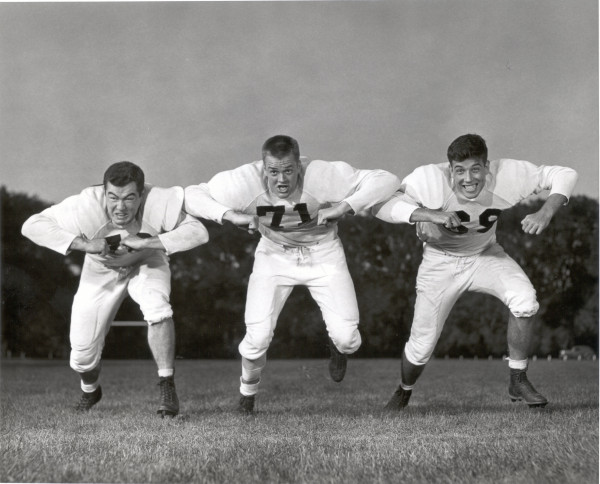 Sigma Chi’s contribution to one of the popular annual campus carnivals, circa 1950. 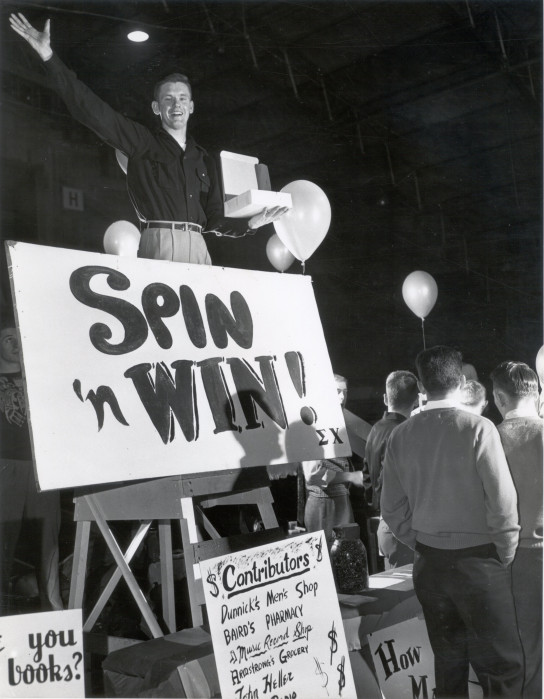 In the summer of 1948, Beloit students excavated mounds at Diamond Bluff, Wis., led by Professor Moreau Maxwell and Chandler Rowe, class of 1939. 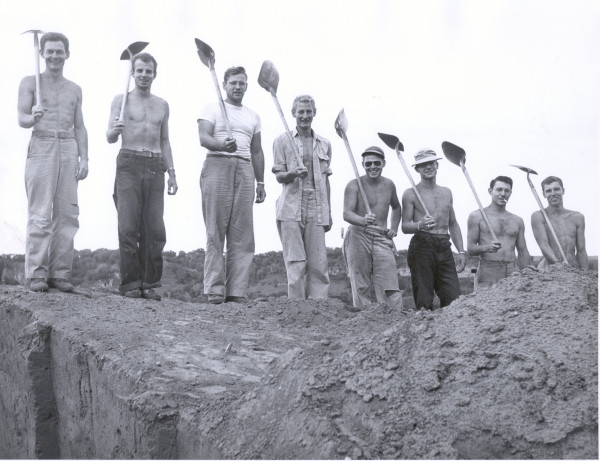 Beloit College celebrated its centennial in 1946-47, including this ceremony at the cornerstone of Middle College. 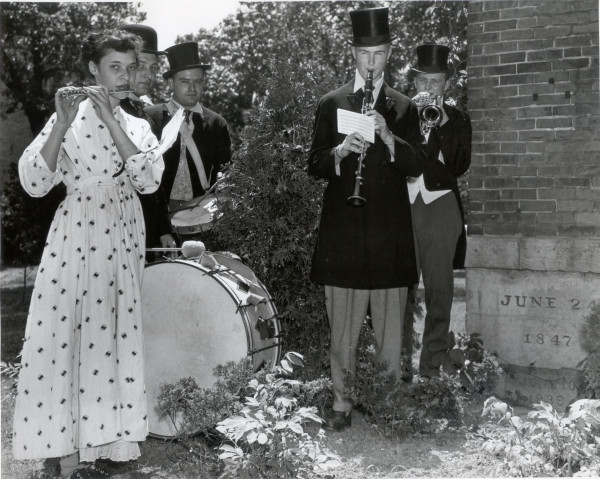 “The Radio Voice of Beloit College” – WBCR-AM broadcast for the first time on Dec. 14, 1948 from the basement of Scoville Hall. The station changed its call letters to WBWR in February 1949. The second “W” stood for “wired.” 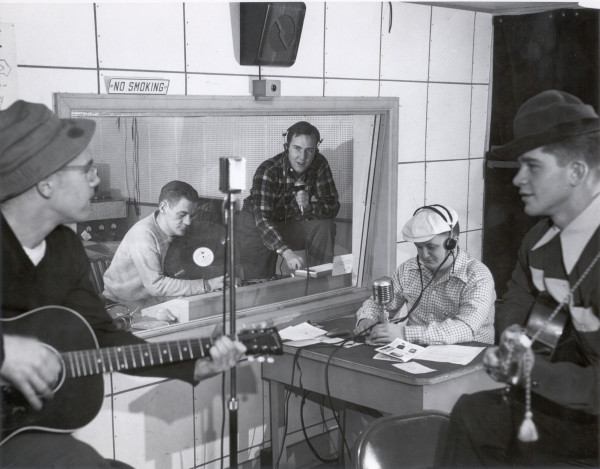 Beloit men, some of them World War II veterans, hang out together for a “bull session” in the late 1940s. 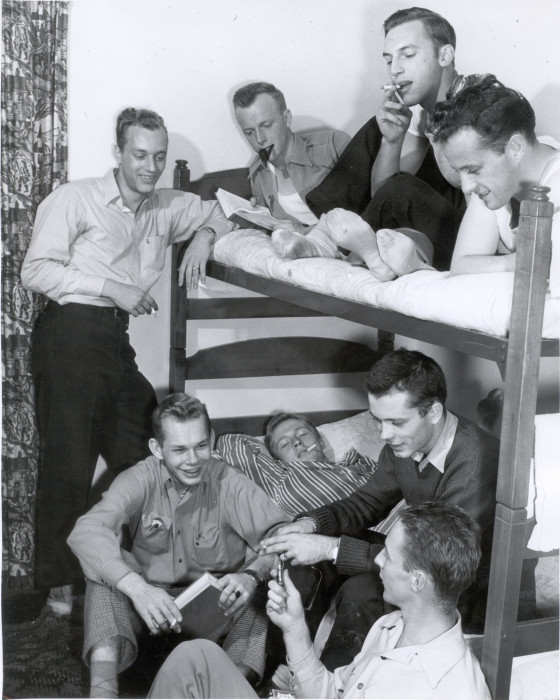 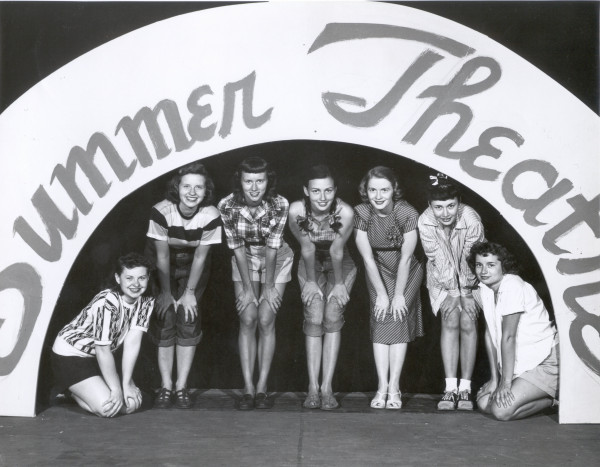 Many photographs show Beloit’s famous greased pole fight, including some by Bob Miller, which appeared in Life. Few, however, depict the aftermath, when exhausted students plunged into Turtle Creek and washed off the worst of the gooey mud and crank-case oil concoction. 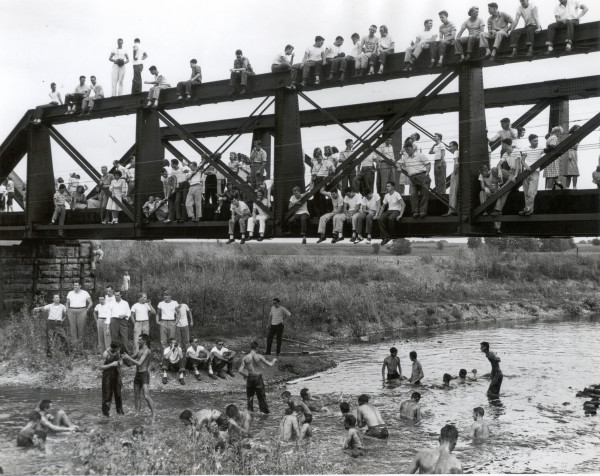 A spring-time view of old Chapin Hall and North College (Campbell Hall). Chapin Hall, built in 1891, served as a dormitory until its razing in 1965, when it made way for the Chamberlin Hall of Science. 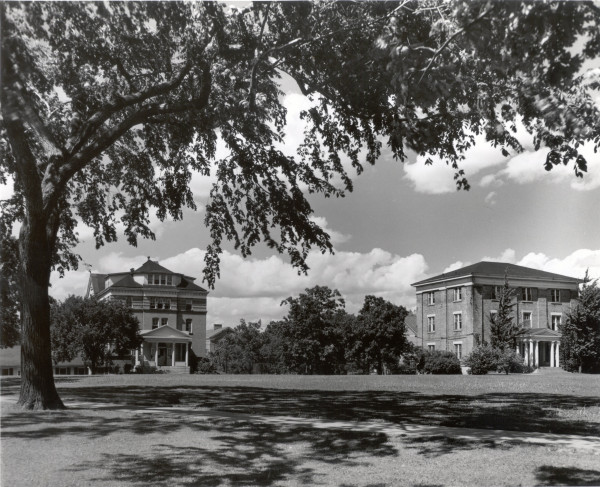 In 1948, the nattily dressed College Band, directed by Harry Holmberg, was a feature at home football games. 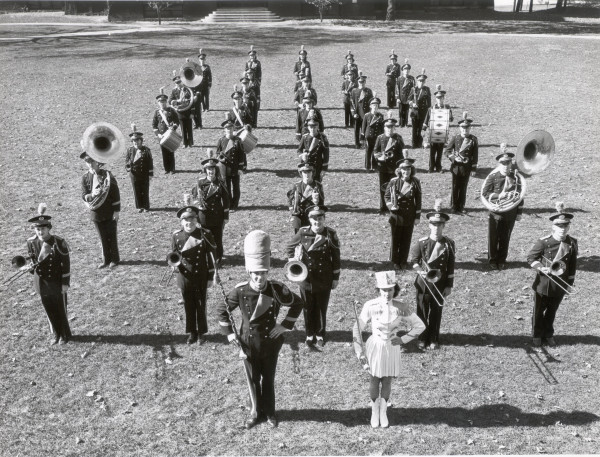 Wire services picked up some of Bob Miller’s dramatic sports photographs, printed by newspapers throughout the United States. This runner crosses the finish line at the college’s new Field House. 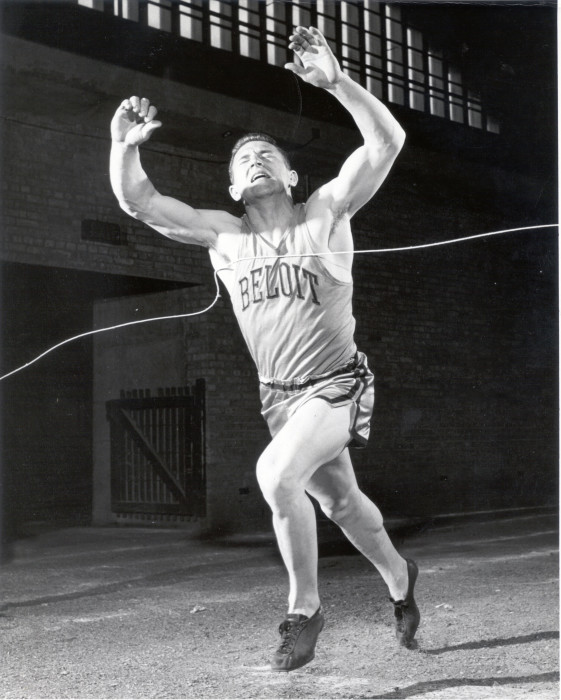