HomeLibrary & Information Technology Services Fridays with Fred: ‘Oh what a tale of horror from the sea!’

Fridays with Fred: ‘Oh what a tale of horror from the sea!’

A look at Beloit’s tragic connection to the Titanic.

Rummage through the archives of a small liberal arts college: reams of correspondence. Diaries. Memos and reports. Slip a reel of microfilm onto a spindle and watch the miniaturized pages of a local newspaper slide by telling tales from the past. Wars. Riots. Societal movements. Disasters. Year after year, as history unfolds, we see how our small, seemingly self-contained home interacts with the wider world. The sinking of the Titanic was no exception.

News first reached Beloit via wire service accounts so sketchy and unreliable that both city newspapers reported a crippled ship still afloat, with no loss of life.

“Halifax, Nova Scotia, April 15. Held afloat only by her water-tight compartments, the great White Star liner Titanic, battered by a collision with an iceberg in mid-ocean, is slowly crawling toward this harbor.” (Special by United Press) – Beloit Daily News, April 15, 1912

TITANIC PASSENGERS ARE SAFE – All are taken off by other vessels summoned to its aid by wireless – Beloit Daily Free Press, April 15, 1912 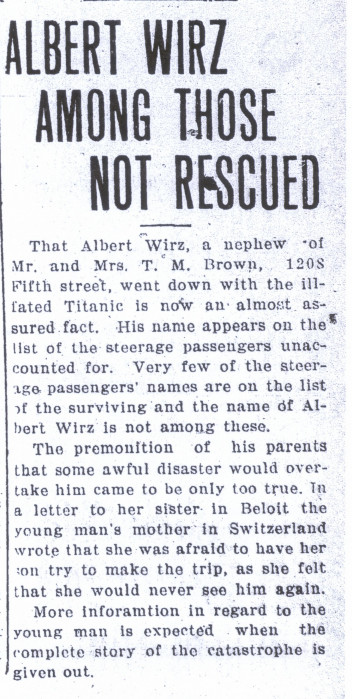 The following day, however, brought dramatic, full-banner headlines and multiple articles, including personal accounts from survivors. The tragic sinking of the Titanic preoccupied the newspapers for days. As the news unfolded, Beloiters stepped forward to tell of their connections to those on board. Several residents lost close friends, including Greek immigrant and candy store worker, Anton Kochicas, whose three friends from Olympia, Greece, were on their way to Milwaukee. Beloit College Professor, Erastus G. Smith recalled “quite a comradeship” he’d struck up with Titanic’s Captain Edward John Smith on an overseas voyage. “Prof. Smith says that Captain Smith was a fine officer and was regarded as one of the greatest navigators on the seas,” reported the Beloit Daily Free Press. “His management of a great boat was the admiration of the passengers. ‘The fates dealt kindly with him in letting him go down with his boat under the circumstances,’ said Prof. Smith in mentioning the horror today.”

Several churches in Beloit hosted memorial services, with speakers helping citizens cope with the disaster. A local movie theater sponsored a special day in which proceeds from tickets went to Titanic survivors who’d lost all of their belongings.

On April 26, the Beloit Daily News reported that the cable repair ship, Mackay-Bennett, carrying recovered bodies, had identified a young Swiss immigrant originally on his way to Beloit to live with his aunt, Mrs. T. H. Brown. Albert Wirz’s few personal effects included his third class steerage ticket, two watches, one ink pot, a knife, a memo book and a purse containing 36 cents. The White Star line agreed to pay for shipment of Wirz’s body to Beloit for burial at Oakwood Cemetery. On May 12, with the sky threatening rain, a crowd assembled at the cemetery. Reverend Peter Pichler of St. Paul’s German Lutheran church conducted the funeral services in German. “His journey is finished,” lamented the Beloit Daily News, “He has reached the place he set out for. But no ruddy cheeked lad will add his wealth of energy and labor to the industries of Beloit. Instead a little mound in the city cemetery marks the consummation of his life’s hopes and incidentally brings home to the people of Beloit, the great ocean tragedy…”

Wirz was one of only three Titanic victims buried in Wisconsin. His grave remained unmarked until 1996. 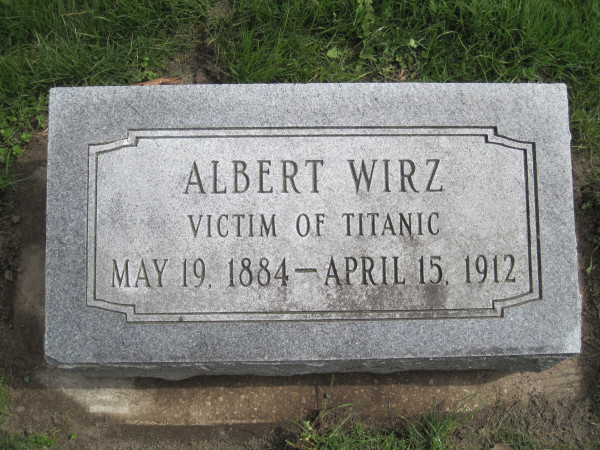 The Beloit College Archives retains two other reminders of the century-old oceanic disaster. Tracy Peck, a retired Yale professor of philology, lived in Italy during his last years and wrote dozens of richly detailed letters to his sister Kezia and to his daughter Terasina, who had married Beloit alumnus and chaplain Wilfred A. Rowell. A letter from Rome, dated April 18, 1912, expresses his alarm over the potential fate of his friend, the artist and writer, Francis D. Millet:

“The awful tragedy of the “Titanic” has been very much in my thoughts for these three days, but you probably know more details than we have yet received. Mr. Francis D. Millet was on board and we are hoping that he is one of the survivors. He is a Harvard graduate, and has been a successful artist and a man of other rare gifts and experiences. He had just been made manager of the combined American Art Academy and School of Classical Studies here in Rome. I think I wrote to you that I spent much of the morning of Good Friday with him on the Janiculum hill. He showed me the plans for the new buildings and discust [sic] many features of the situation and prospects. As I left him he was very cordial and said he hoped I would certainly be here to help him in the fall.” 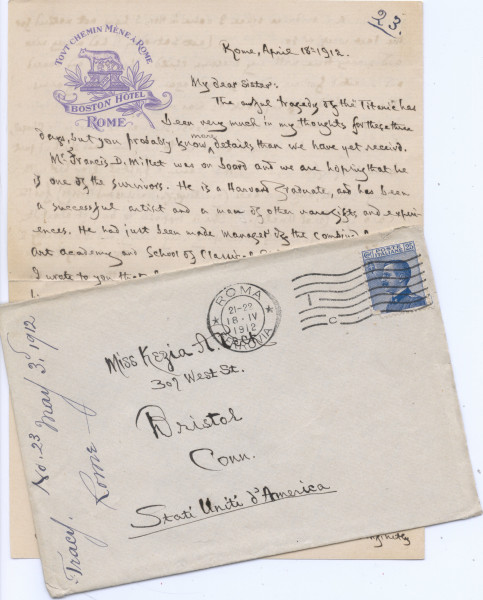 Millet did not survive. Interestingly, upon arrival in the United States he would have traveled to Madison to paint four panels in the Supreme Court room of the new capital building.

Irving Maurer graduated from Beloit College in 1904 and in 1924 became its third president. In 1912, however, he was pastor at the Plymouth Congregational Church in Utica, New York. As avid a diarist as ever, he jotted down his impressions of the Titanic disaster on Tuesday April 16, 1912:

“Oh what a tale of horror from the sea! The Titanic, largest ship afloat rushing westward through the night crashed into an ice berg off Cape Race Sunday night and when the Cunarder Carpathia reached the scene 12 hours later only 20 crowded boats remained above the water – loss of life 1300!…The elements of the tragedy are overwhelming – the fog and darkness, the roar and thunder of collision, the panic, the ordered transfer into the boats of women + children, the plunge downward to the sea, and the swirling gulf opening into eternity for all these souls! This was the great ship’s maiden voyage.” 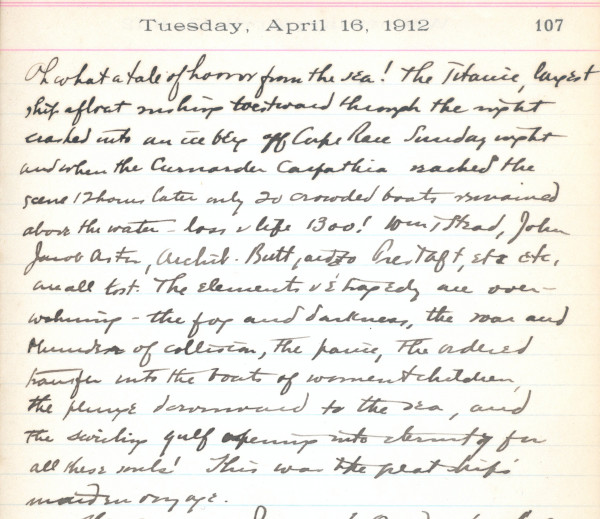 Special thanks to Beloit College housekeeper and local history sleuth Debbie Najdowski for help with this story.