Fridays with Fred: Delving into a student’s turn-of-the-century photo album

Blast to the past through a early 1900s Beloit College students photo album.

The photograph album is small and unassuming, even drab, with its dull black cardboard covers. Flip through its fragile pages and discover countless pasted-in snapshots revealing everyday life at Beloit College in the first decade of the 20th century.

The album once belonged to Chester Arthur Golding, class of 1908. Golding, likely named after the nation’s 21st president, hailed from Wauconda, Ill. He attended the Beloit College Academy before entering the freshman class in 1904, and had a distinguished career at the college, filling important positions in the debating societies, singing in the Vesper Choir, serving as associate editor of the Round Table, and participating in the sub-rosa Turtle Mound Society of senior men, all while maintaining top grades, gaining election to Phi Beta Kappa and graduating magna cum laude. After Beloit, he taught chemistry for a few years and then moved on to a long career as a manufacturing chemist. He retired to Florida, where he was an avid fisherman, and passed away in 1973 at age 88.

Golding’s charming photographs show students having fun, from typical activities of the era such as the Cane Rush and Big Hill Day to frolicsome picnics, country hikes, Rock River canoe trips, and fraternity hijinks at his beloved Sigma Chi house. There are also rare interior views of campus buildings and student rooms. Below, some selections from this recently acquired gem: 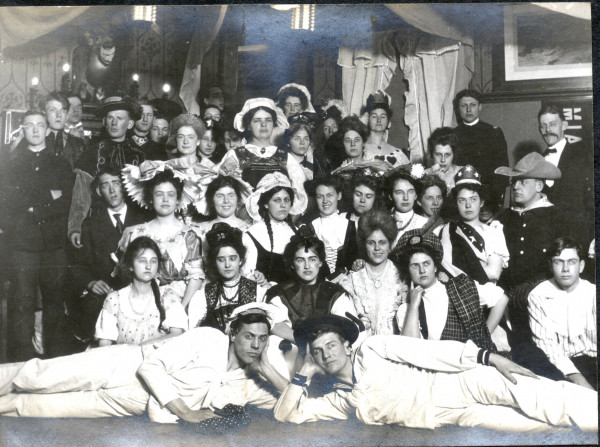 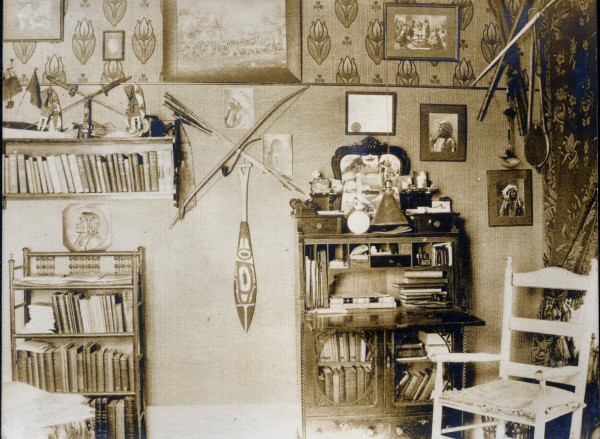 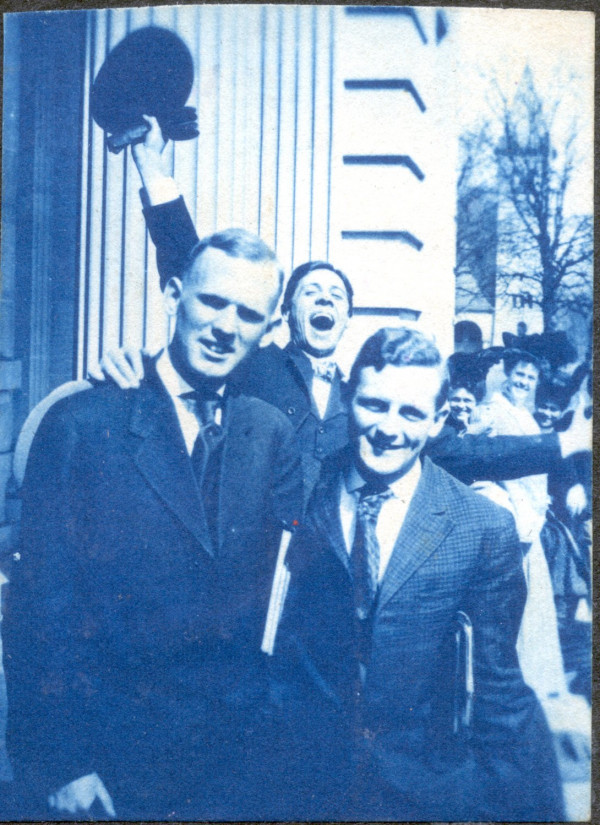 The album’s only blueprint photograph depicts Chester A. Golding on the left with his friend Henry Arnold and an unidentified joker in back stealing the show. They stand next to the Carnegie Library (WAC) with Eaton Chapel in the background. 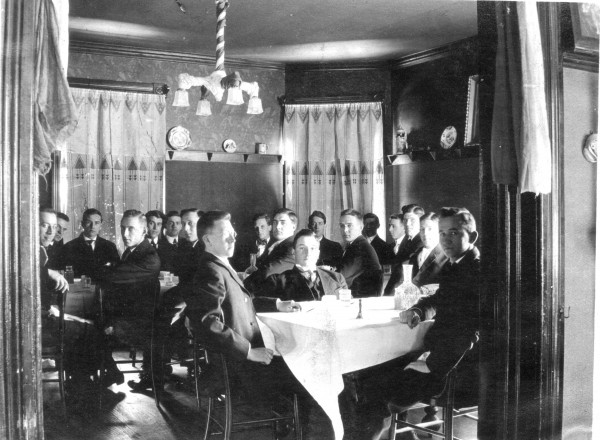 The men of Sigma Chi elegantly dressed for dinner at their house at 745 Milwaukee Road. 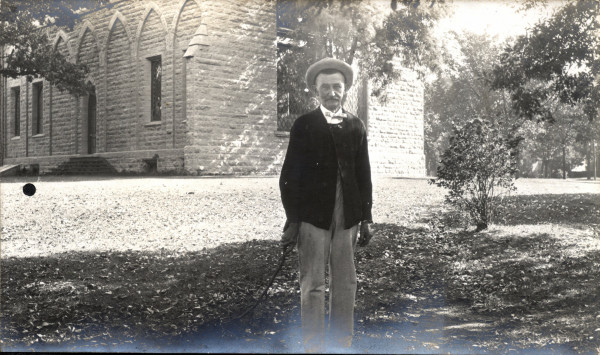 The Professor of Dust and Ashes, venerable campus janitor Johnny Pfeffer at the back of Memorial Hall, Logan Museum. 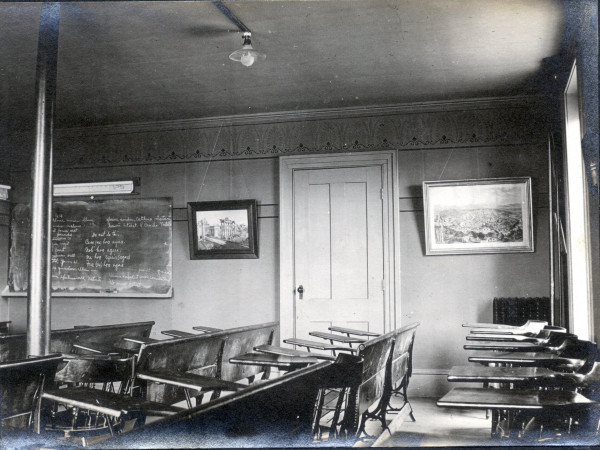 Perhaps further research might yield the location of this classroom. The Latin scrawled on the blackboard provides a clue. 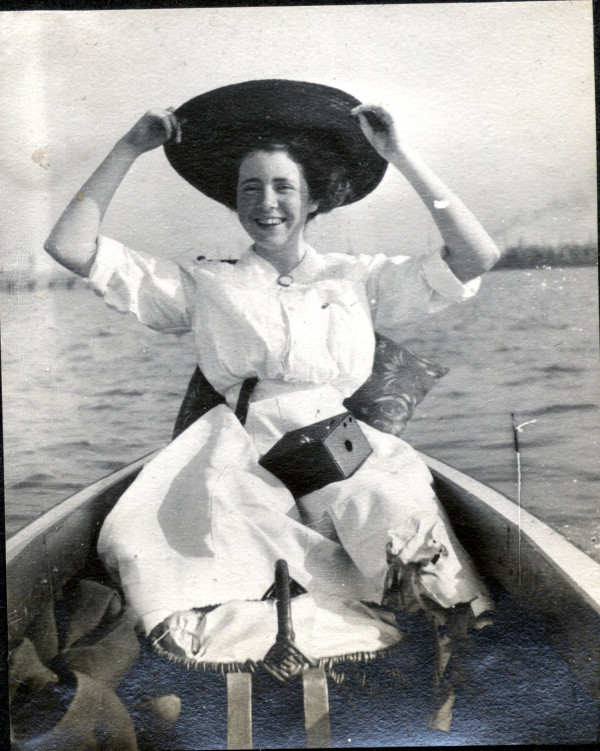 An unidentified woman fights a stiff breeze on one of the many Rock River excursions enjoyed by Golding and his classmates. That’s probably one of the earliest Brownie cameras on her lap, first manufactured by Eastman Kodak in 1900. 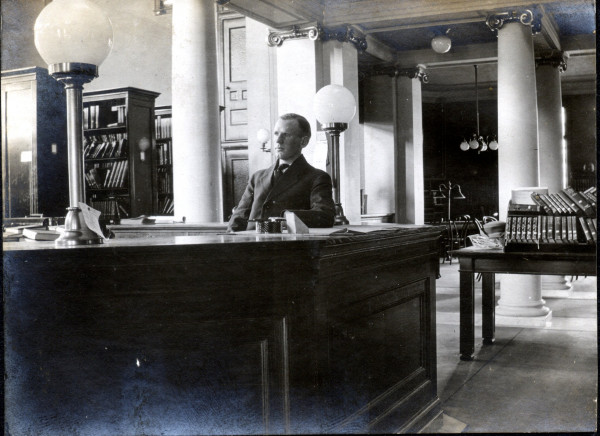 A rare interior view of the college’s brand new Carnegie Library (WAC), showing the well-lit circulation desk in the central hall, with one of the reading rooms in the background. 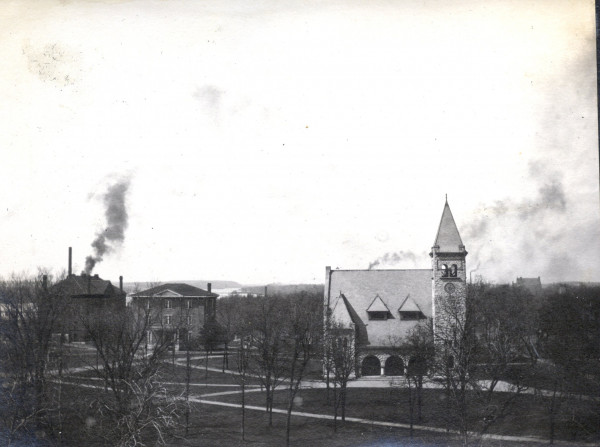 Beloit’s burgeoning turn of the century manufacturing industry meant smoke casting a pall over the downtown, the river, and even the campus, as shown in this photograph of old Chapin Hall, North College (Campbell Hall) and Eaton Chapel, with Big Hill not-yet-a-park in the distance. 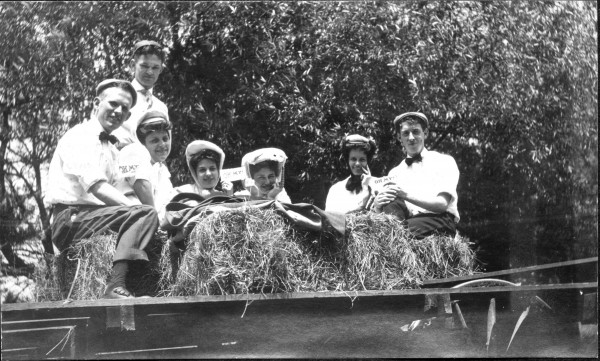 “Hay Rack Ride,” Golding noted. It’s too bad he didn’t explain the mysterious “Oh My!” placards held up by these smiling students out for yet another day of pleasure.