Fridays with Fred: the histories of Beloit, now available digitally

Brief history of the archives and its transition to the digital.

From its inception, Beloit College treasured its history as a pioneer institution. The trustees and faculty kept careful records of their meetings in elegant, handwritten ledgers. Beginning in 1853, the student body documented collegiate life in the Beloit College Monthly, “Designed as an Exponent of Western Collegiate Education.” For its tenth anniversary, the college published a pamphlet by Professor Joseph Emerson entitled “Beloit College as a National Institution,” but it was as much promotional literature as history. At the quarter centennial in 1872 and again at the semi-centennial in 1897, the college printed lengthy compilations of papers detailing its history, educational philosophy, and mission. Clearly, as the years slipped by, faculty and administration felt in the mood to look back and take stock.

The December 1927 issue of the Beloit College Alumnus contained the following announcement under the heading, “A History of Beloit College:”

“Beloit has never had a history of its life. Many younger colleges have made much of historical volumes. The need of one for Beloit has been keenly felt…At the request of the Trustees of the College, Dr. Eaton has been at work for two years upon such a history…No other living alumnus is as well fitted to do this work.” 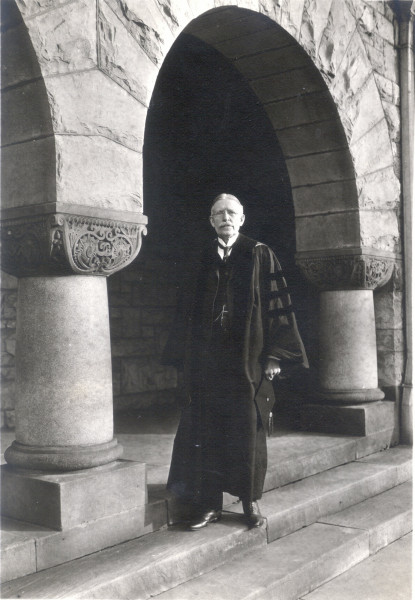 As a graduate of the class of 1872, Eaton (pictured above) knew the old guard – Chapin, Blaisdell, Bushnell, Emerson, Porter, and others. As president from 1886 to 1917, Eaton had decades of experience with the inner workings of the college. Eaton, too, felt the urgency for a book-length history, noting in his introduction to the finished volume, Historical Sketches of Beloit College:

“Events unrecorded drift rapidly into oblivion. That which appears unforgettable is blurred with the passing of years and cannot be accurately recovered. The life of the College is too valuable a part of the life of the world, and too precious to all who know and love it, to be allowed through neglect to lapse into an indistinguishable past.” 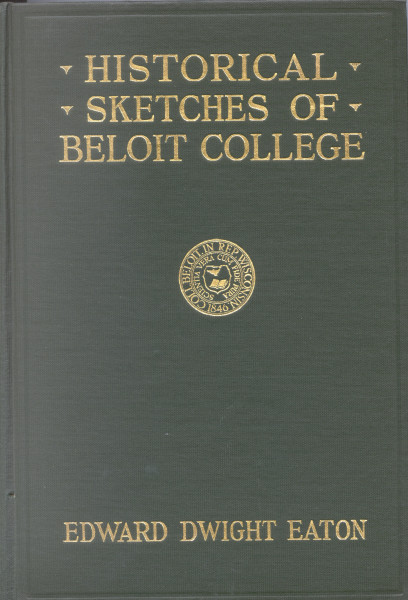 Eaton’s attractively bound book appeared in May 1928 in an edition of 2,000 at $2 a copy. Early chapters brought to life such topics as “The Colony that became a College Town,” “The Epic of the Foundation Builders,” and “Some First Things and Some Noble Men.” Later chapters dealt with coeducation, presidential administrations, the curriculum, and more.

Historical Sketches sold out quickly, and within a few years Eaton made some slight revisions and added updated information for a new edition published in 1935. The college made sure to produce enough copies to give one to every entering student. A notice from President Irving Maurer read in part: “The College advises new students to be particularly careful in preserving this copy as its value will increase each year. The College suggests new students, in spare moments, to read the book carefully as a knowledge of the background of the College is essential to the fullest enjoyment of its life.” 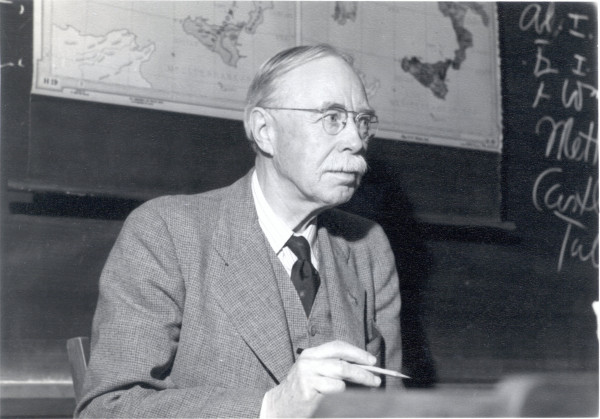 Despite the book’s success, Beloit College Professor Robert Kimball Richardson (pictured above) longed for a more substantial and even scholarly treatment of the college’s history. Over the next 15 years, the legendary archivist and history professor devoted hours upon hours to painstaking research, rummaging through college attics and basements, plumbing the depths of thousands of pages of handwritten documents and printed materials, and conducting exhaustive correspondence with historical societies and archives and with anyone connected to the college’s past. Richardson worked before the dawn of the photocopier and laboriously typed excerpts from source material and made carbon copies for his complex filing system. At first he planned to simply update and embellish Eaton’s history, adding further details and documenting sources via footnotes, but over time he added hundreds of pages covering the evolution of academic departments, administration trials and successes, and student life customs and controversies. Professor Richardson completed a nearly 1,500-page manuscript shortly before his death in 1952. His widow, Helen Drew Richardson, negotiated with the college about publishing his work in two volumes, but nothing came of it. She labored off and on for the next two decades, attempting to whittle down the manuscript and create a more compact narrative history, but passed away before finishing. 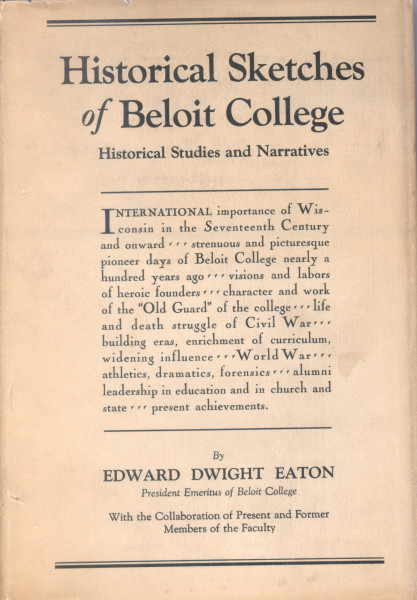 For years, Historical Sketches of Beloit College served as the most accessible early history of Beloit College, but although the Richardson manuscript came in handy for research and reference, it remained tucked away in the College Archives, crammed into aging binders.

Now, for the first time ever, both books are available to the wider world through our Beloit College Digital Collections. Over the past year, under the supervision of Digital Resources Librarian Josh Hickman, students Liz Levy’14 and David Kovarik’15 have carefully scanned every page.