Fridays with Fred: the Hemingway connections

A dive into Hemingway’s mention of Beloit in a novel.

“Three men usually get out of the five (that are inside) and they run like broken-field runners that have been shaken loose in a play when you are Minnesota and the others are Beloit, Wisconsin.

“No. I do not understand these local allusions. But you can explain them when you care to. Please keep on telling me.”

Ernest Hemingway – Across the River and into the Trees

Why did Ernest Hemingway mention Beloit in one of his novels? Why not the University of Illinois or Knox College? Or any number of other Midwestern colleges? Although Beloit College had traditionally strong ties to Hemingway’s hometown, Oak Park, Ill., a closer look into his life and a hunt through the Beloit College Archives reveal deeper connections. 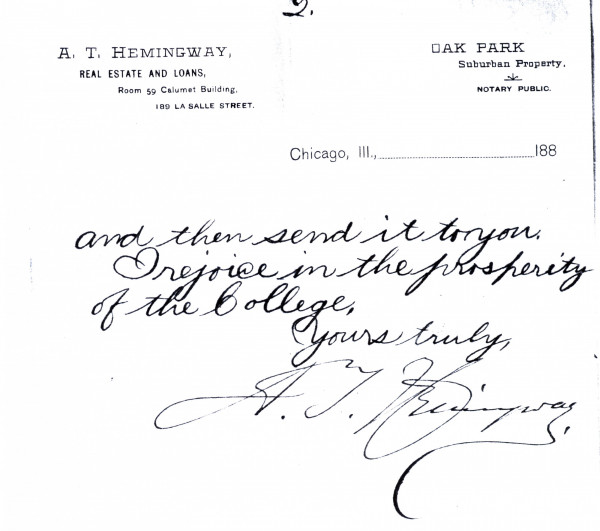 Beloit’s first ties to the Hemingway family occurred long before Ernest’s birth in 1899. His grandfather, Anson T. Hemingway, described by Hemingway’s biographer Carlos Baker as “a straight-backed, gray-bearded Civil War veteran” lived in Oak Park and was a well-to-do owner of a real estate business in Chicago. Edward Dwight Eaton, class of 1872, became pastor of the First Congregational Church at Oak Park in 1879, seven years before his election as president of Beloit College. It may be through Eaton that A.T. Hemingway first became acquainted with the college; in any case, the Beloit College Trustees minutes of Jan. 9, 1888, describe the appointment of A.T. Hemingway as a college financial agent for a term of three years at a princely salary of $2,400 per year “to undertake a work of raising funds & promoting the interest in Beloit College.” The following year, Grandfather Hemingway donated a lot in Chicago worth $500 as part of the 1889 Pearsons Fund campaign. His letter announcing the gift closed with a toast: “I rejoice in the prosperity of the College. Yours truly, A.T. Hemingway.” 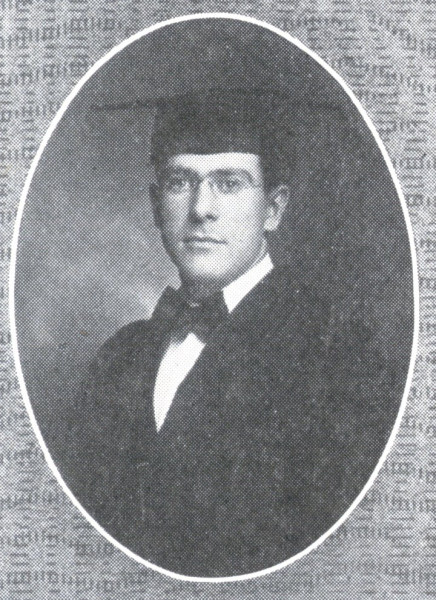 Ernest Hemingway nicknamed one of his favorite English teachers at Oak Park High School, “Peerless Platt.” Frank Platt, pictured above, graduated from Beloit College in 1908 and began his long, distinguished teaching career at Oak Park in 1913, where he became chairman of the English department. Ernest’s sister Marcelline wrote about Platt in her book, At the Hemingways:

“During our first years in high school we were together in the classes taught by the head of the English Department, Frank J. Platt; he taught in the oak-paneled English Club room, where his students sat in leather-seated arm chairs under the beamed ceiling. Mr. Platt was a dignified, rather quiet, unexpressive man himself, but he liked our efforts at originality, and his appreciation and high marks gave Ernest’s and my egos a much needed boost.” 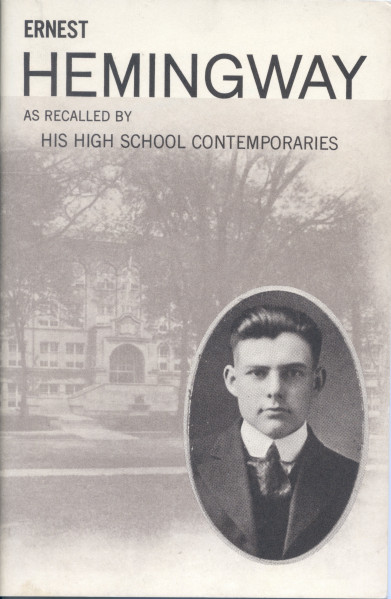 A 1973 booklet entitled Ernest Hemingway as Recalled by his High School Contemporaries provides a glimpse of Frank Platt’s formative influence on Ernest Hemingway. “In the autumn of 1913 I taught Marcelline and Ernest in freshman classes,” Platt recalled. “Both were handsome students, humming with vitality and eager for adventure in ideas and action…In this academic atmosphere [the English Club room], Ernest studied during his freshman year the classic myths, Old Testament narratives and One Hundred Narrative Poems – a gold mine of stories from the ballads to Sohrab and Rustum…A rumor has spread recently that Ernest was a poor student in high school. Actually he was a good student. In 1913 only two grades were recorded, A for acceptable and D for deficient. He always had an A and a grade average of 90.”

Hemingway’s interest in writing and journalism took flower at Oak Park High, as remembered by one of his friends, future Beloit College graduate, Susan Lowrey (the two are pictured below, Lowrey in the center, Hemingway at right), class of 1921, who commented later, “I have always felt that I live in reflected glory, so far as Ernest Hemingway is concerned.” She wrote at length about their friendship in Ernest Hemingway as Recalled by his High School Contemporaries: “I knew Hemingway in many different associations: home room, the last three years of the same English class, the orchestra and our work together on the school paper, the Trapeze – and the yearbook, Tabula. I had no boy-girl dates with Ernest. He didn’t seem interested in that! He preferred to go hunting and fishing…” 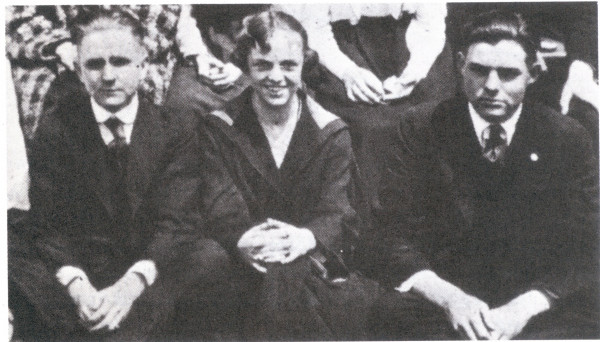 Along with four others, Lowrey and Hemingway co-edited the Trapeze during their senior year and she remembered his latent talent and his knack for writing funny material: “[He was] always laughing, and carefree. His literary ability was recognized, but one might have predicted that he would be a writer of humor.” Carlos Baker also quoted Lowrey on the topic of Ernest’s nascent ability as a writer: “Ernest’s themes were almost always read in class as examples for the rest of us to strive for.” Lowrey was especially proud of the caption she wrote under Hemingway’s senior class photo in the Tabula: “None are to be found more clever than Ernie.”

Ernest Hemingway never attended college. Instead, he opted for apprenticeship as a cub reporter at the Kansas City Star. Where would he have gone if he’d hiked the college path? He might have joined his beloved sister Marcelline at Oberlin. Or followed a close friend to the University of Illinois. Perhaps Frank Platt or Susan Lowrey could have persuaded him to try Beloit, and as Charles A. Fenton noted in The Apprenticeship of Ernest Hemingway, “Few of the graduates of Oak Park High had any difficulty with the admission requirements of Williams, Mount Holyoke, Wellesley, Yale, Amherst, or the fashionable and more regionally attractive Beloit.”

In an alternative world or perhaps in a different dimension, an archivist cracks open the Beloit College yearbook, class of 1921, turns the pages to the seniors…and finds the name Hemingway.