HomeLibrary & Information Technology Services Fridays with Fred: A picture-postcard-perfect view of Beloit in the teens, ’20s

Fridays with Fred: A picture-postcard-perfect view of Beloit in the teens, ’20s

The beautiful postcards of Beloit and the College.

In late January 2012, United States postal rates will once again increase for first class mail and postcards. A recently acquired souvenir postcard folder in the Beloit College Archives hails from an era when postage prices held steady at a penny a postcard, two cents for a letter. The E.C. Kropp Company of Milwaukee was well known as publisher and printer of high-quality chromolithographic souvenir cards and lesser-quality postal cards. A series of Beloit images appeared in the teens and early 1920s as separate cards and as a colorful folder of 20 images, including a boosterish write-up about the city of Beloit. A visitor learns handy information: Did you know that Beloit’s altitude is 750 feet? That there are 32 miles of paved streets?

The author explains that along with two passenger railroad lines, an inter-urban electric line connects Beloit with Janesville, Rockford, and other towns and villages. “A magnificent feature of the grade school system is the Kindergarten operated in connection with each of the eight schools.” Although that boast sounds strange to our ears today, apparently only 11 percent of kindergarten-aged children attended kindergarten circa 1920.

“Beloit has been the cradle of many inventions,” the anonymous postcard writer tells us, “notable are the Eclipse windmill and the corn planter, invented by a farmer boy near Beloit.”

The author does not neglect the college, noting its “high place in the educational world,” its “beautifully historic campus…located but a few blocks from the business section,” and then, rather cryptically, “In the grounds of the Beloit College are numerous Indian Mounds, which were the burial places of the Mound Indians.”

Lastly, the writer informs us that “the best hotel accommodations are offered,” which leads us to our selection of images:

The Hotel Hilton, built in 1904, stands to the left in this view of Grand Avenue. Today we know it as the Turtle Creek Bookstore. The view also shows inter-urban streetcar tracks and a transitional mix of automobiles, carriages, and wagons. 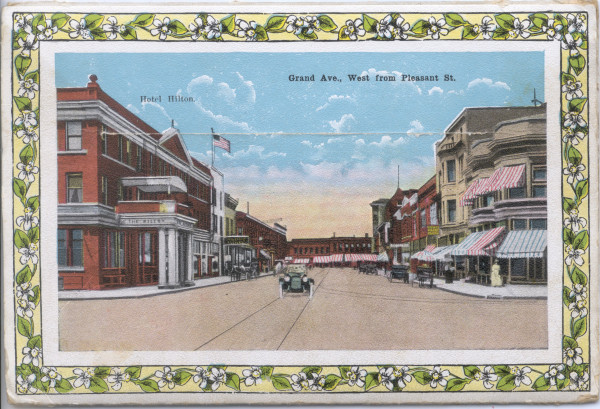 If you look closely at this view of the dam on Rock River, you can make out the railroad bridge—now the Wood Family Fishing Bridge—in the distance. To the right stands the 1889 limestone water tower with its original wood top. According to an article from 1935, when the city built a new steel water tower, the old limestone water tower fiercely resisted all attempts to tear it down. Today, the tower once “regarded as the finest piece of stone masonry in the west,” still stands sentinel like an ancient castle turret, while the steel tower is history. 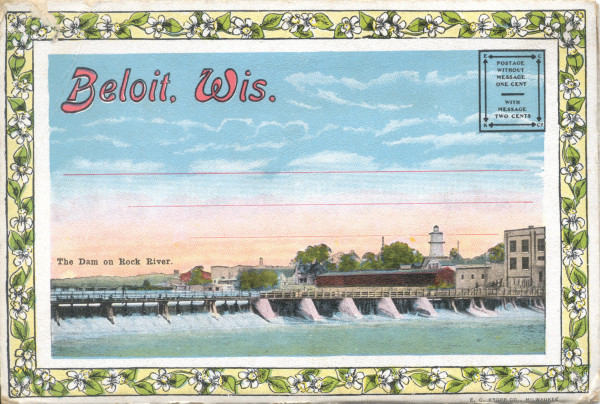 The transparent flag is an artist’s fancy, although the college did maintain a flagpole near Pearsons Hall of Science. Famed Chicago architect Daniel Burnham designed the building in 1892. In a long letter critiquing the building, Burnham urged the removal of the fancy half-circle metal grillework at the front entrance, a feature he detested. However, the grillework remains a familiar sight nearly 120 years later. 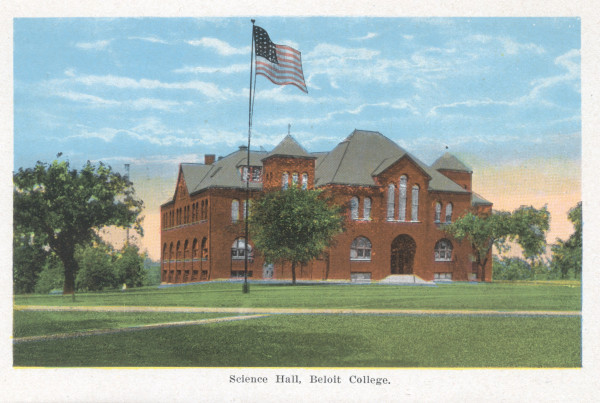 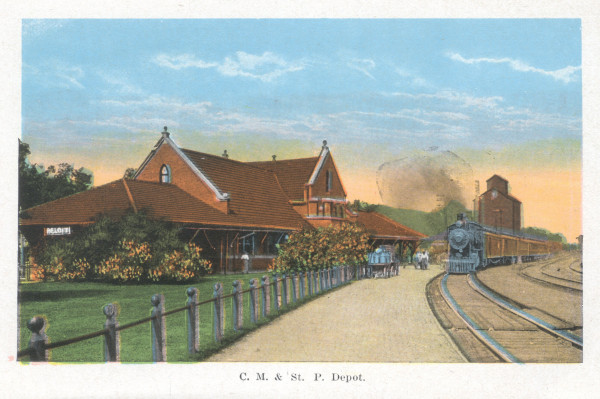 Beloit built a distinguished looking downtown post office in 1912, but found expansion of the building necessary only twenty years later. The post office moved to its current facility in 1969 and the city renovated the old building as the new Beloit Public Library, where it resided for the next 40 years. In 2010, after extensive renovations, the building debuted as Beloit College’s new Hendricks Center for the Arts. 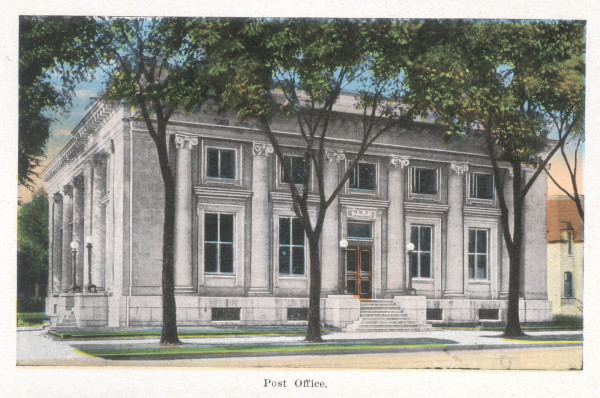 This view of venerable Middle College shows the two-tier porch, elaborate cupola, and decorative Victorian gingerbread tacked onto its formerly plain exterior in 1880. Renovations in 1938-39 tore off the fancy stuff and added a classical touch with Doric columns and a more proportional and refined cupola. 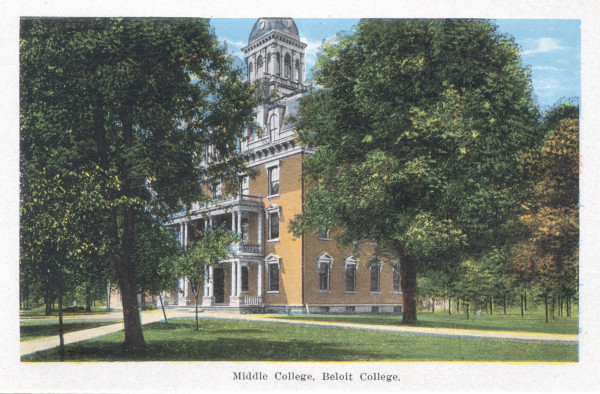