The life of Beloiter Lew Sarett, a renowned nature poet.

Here in Beloit in late October and early November, great vees of geese fly overhead, morning sunlight warming their underbellies. Looking up, you’ll spy a straggler, honking madly, desperate to catch up. Eighty years ago, a famous but now half-forgotten Beloiter wrote a poem in tribute to the Canada Goose:

To a Wild Goose over Decoys

O lonely trumpeter, coasting down the sky,
Like a winter leaf blown from the bur-oak tree
By whipping winds, and flapping silverly
Against the sun – I know your lonely cry.

I know the worn wild heart that bends your flight
And circles you above this beckoning lake,
Eager of neck, to find the honking drake
Who speaks of reedy refuge for the night.

I know the sudden rapture that you fling
In answer to our friendly gander’s call –
Halloo! Beware decoys! – or you will fall
With a silver bullet whistling in your wing!

Beat on your weary flight across the blue!
Beware, O traveler, of our gabbling geese!
Beware this weedy counterfeit of peace!…
Oh, I was once a passing bird like you.

In the 1920s and ’30s, Lew Sarett was perhaps the best-known nature poet in the United States, widely anthologized and in heavy demand for readings. Literary fashions change. Today, his rhyming, lyric poetry has fallen out of favor, and he is an author awaiting rediscovery.

Lew Sarett, then known as Saretsky, was born in Chicago on May 16, 1888, to immigrant parents.

“When I was a little boy,” he wrote, “we moved to Marquette, Mich. The region was wild and beautiful. Before I was 10 I knew a good deal about the woods. Later, as a result of family trouble, my mother and I found ourselves in Chicago alone. We knew bitter poverty and hunger. At the age of 12 I supported my mother and myself with various jobs that paid a pittance.”

Sarett noted this “dark period,” when he worked as a newsboy, sweatshop errand boy, and underground lavatory attendant, as formative.

“The poet in me was born, and my passion for nature.” As a teenager, Saretsky moved to Benton Harbor, Mich., where he made his mark as an athlete and scholar in high school. 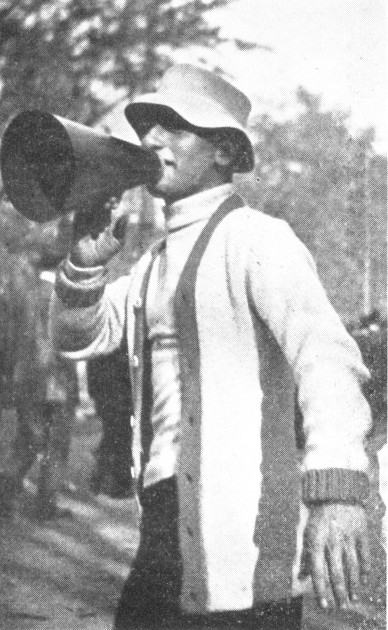 Following a year at the University of Michigan, he entered Beloit College as a sophomore in 1909. He soon became a favorite of the students as chief rooter of the football cheerleading squad. The Round Table described “Swat” as “a born leader,” noting that “it was greatly due to his work that the Beloit students secured the title of ‘the best rooters in the state.’” The college later credited him with the establishment of Homecoming. Saretsky also served as assistant athletic director to coach Dana Evans and formed a wrestling squad, which, according to the Round Table, hosted “the first wrestling tournament ever held in the West under college auspices.” At 165 pounds, Saretsky grappled in a memorable match.

“The only accident of the evening happened at the beginning of the bout between Saretsky and Harshaw, when the former had his shoulder thrown out of joint,” the Round Table reported. “It was pulled back into place, and he continued the bout, winning from his opponent in five minutes with a half-Nelson and scissors hold.” That toughness would serve him well as an outdoorsman. 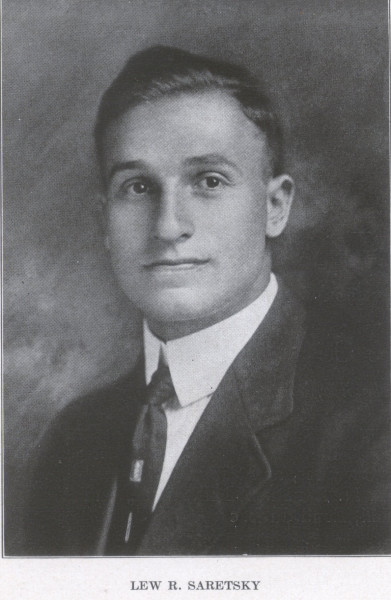 Although Saretsky pursued graduate work, he spent many summers as a guide in northern Minnesota and Canada and as a forest ranger in the Rockies.

“In those years of adventure in the woods and mountains,” he wrote, “I covered about 25,000 miles of Canada and the United States by canoe and pack train.” During his travels, he became close to the Chippewa Indians, who made him a member of their tribe and named him “Lone Caribou.” 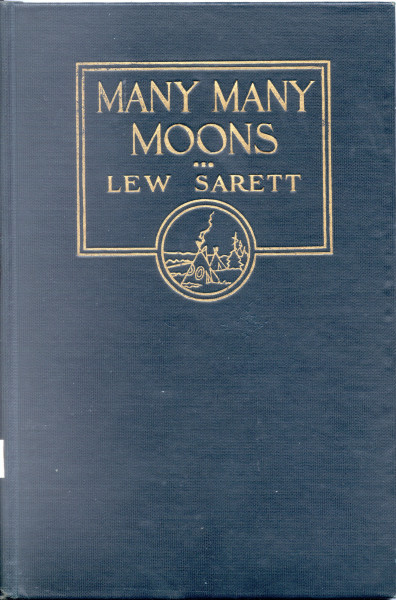 He began to record his observations of the natural world and of Native American life and as Lew Sarett, published poetry and articles in major magazines such as the Atlantic Monthly, Poetry, and the North American Review. His first book, Many Many Moons, appeared in 1920 to glowing reviews. In his introduction to the book, Sarett’s friend Carl Sandburg wrote, “And so Sarett…with tall timbers, fresh waters, blue ducks, and a loon in him. The loon, a poet’s bird for sure, is here. Unless there is a loon cry in a book the poetry is gone out of it…the loam and the lingo, the sand and the syllables of North America are here…”

Sarett published several more books and his reputation grew. Poetry, which always championed his work, awarded him the Helen Haire Levinson Prize in 1921, a prestigious honor achieved by such poets as Edna St. Vincent Millay, Anne Sexton, Wallace Stevens, Dylan Thomas, and William Carlos Williams. In 1932, Sarett was one of five finalists out of 51 for the Pulitzer Prize in poetry. Increased demand for readings led him on extensive tours throughout the United States, frequently speaking at colleges and universities. He also served a long and distinguished career as professor of speech at Northwestern University.

Lew Sarett passed away in 1954. Although his books are out of print, his devotion to nature lives on in 800 acres at the Sarett Nature Center and Wildlife Sanctuary in southwestern Michigan outside of Benton Harbor. Over the years the loyal Beloiter maintained close ties to his alma mater, from which he received an honorary degree in 1946. A 1941 letter to President Irving Maurer described what Beloit meant to him:

“The more I see of colleges, the more I appreciate Beloit College. It is a real college, Prexy; it is strong scholastically; its faculty is able – in some cases distinguished; its president has strength and imagination; its students have quality; and the college has a beautiful, tough spiritual fibre – thanks to the New England Congregationalists who founded it and whose spirit pervades the place. I know this: I got something precious and imperishable from Beloit as a student – a spiritual vitality, an intellectual flame, a sense of social values, an outlook on life – certain imponderable elements; they shine in everything I write as an author, in everything I say as a speaker, and in everything I am as a teacher. I can thank Beloit in large part for these intangible but terribly real forces in my life.”