Fridays with Fred: The first of the Beloit Fiction Journals

See how the first Fiction Journals came to be. 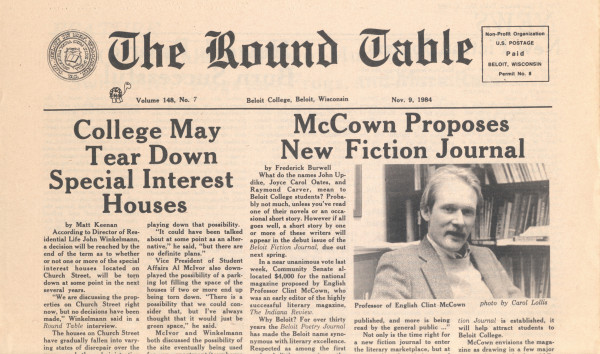 When English professors David and Marion Stocking retired from Beloit College in spring 1984, the famous Beloit Poetry Journal, associated with the college since 1950, went with them. What could take its place?

That fall, I was co-editor-in-chief of the Round Table. In November I caught wind of a proposal submitted to the students’ Community Senate. Enter Clint McCown, a young English professor with an unusual concept. Why not start a “pure fiction” magazine? And why not have undergraduate editors? Call it the Beloit Fiction Journal.

Community Senate accepted his proposal and funded it. I telephoned Clint and arranged an interview about Beloit’s new national magazine dedicated to the short story. I looked forward to the meeting, remembering a conversation I’d had with my father years before while canoeing on a Vermont lake. He’d told me about Story Magazine, the most important literary magazine of the 1930s and 1940s, which published such authors as J.D. Salinger, Norman Mailer, and Carson McCullers for the first time. Since climbing out of that canoe, I’d dreamed of one day working on such a magazine.

I met with Clint in his tiny office in WAC and when I told him of my strong interest in helping start the Beloit Fiction Journal, he grinned and said, “Fred, you’re the first to sign up.”

“I’m willing to work on it right away,” I told him. “Even if it eats into what little free time I have.” I kept my word—possibly to the detriment of my classes

After an organizational meeting which attracted two dozen students, we sent fliers to writing programs and resource centers and notices to writer publications. Before long, manuscripts began to trickle in, followed by a deluge, stacked in teetering piles on the windowsill in Clint’s office, where he no longer needed a window shade. 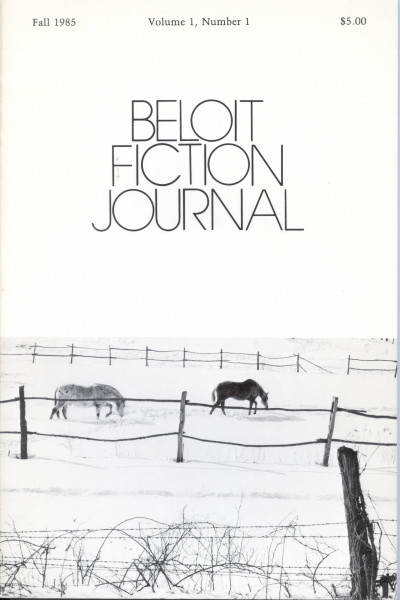 As managing editor, I attempted to read every story. We set up bins in the library, one for unprocessed manuscripts, another for those deemed un-publishable by at least two readers and a third for “contenders.” Each manuscript had a cover sheet for comments and ratings – 1 to 10, with a “7” and above considered “publishable.”

The Beloit Fiction Journal editorial board, now a dozen hardworking students, met weekly to discuss the merits of contending stories. Fierce arguments developed between different factions – the avant-garde artistes, the mainstream English majors, the traditional-minded, the experimental – with Clint the genial arbitrator.

We discovered that manuscript cover letters with laundry lists of past publications meant nothing – it would be too easy to stock a magazine with names familiar to the literary magazine establishment. Only the quality of the story mattered. We learned about where and how stories fall apart. How a beautifully written story could feel empty at its core, how something a little rougher might have a lot more heart and life to it. How one writer might compose dazzling, lifelike dialogue and yet fail in description, or the other way around. We learned about “types” of stories which appeared over and over – the angst-ridden grad school student story, the terminal disease story, the abuse story, the failing relationship story, the coming of age story and more. Those that rose above type might just make it in. Best of all, we learned a great deal about writing through winnowing the slush pile. And out of those stacks of paper-clipped manuscripts came our “eureka” moments, the delightfully shivery feeling when we recognized an artist at work, a writer with the gift to move us. That’s when the Beloit Fiction Journal became magic.

Gradually, the first issue took shape. By the end of spring semester 1985, we’d selected a good variety of stories, ready for proofreading and typesetting and at last, printing. At 6 p.m. on Nov. 25, we assembled in WAC 10 and waited for Clint, who arrived a moment later, lugging a great heap of first edition copies of the Beloit Fiction Journal. He dumped them on a table, slowly surveyed his staff and said, “From this moment on, the literary world is going to stand up and take notice. We’re on our way to glory!” 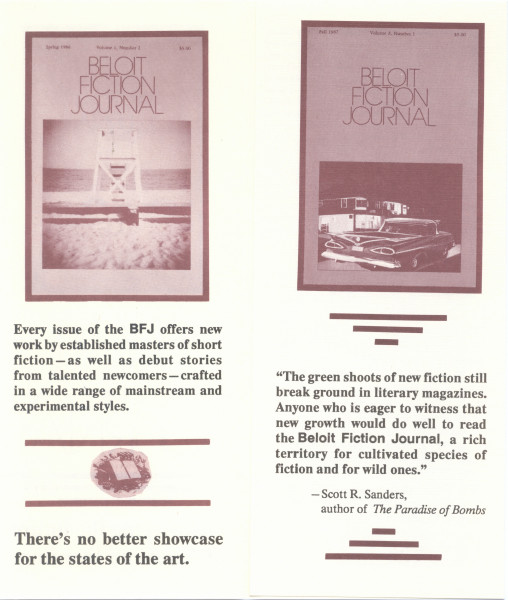