Fridays with Fred: The great Cane Rush of 1906

A look at the Cane Rush tradition at Beloit College. 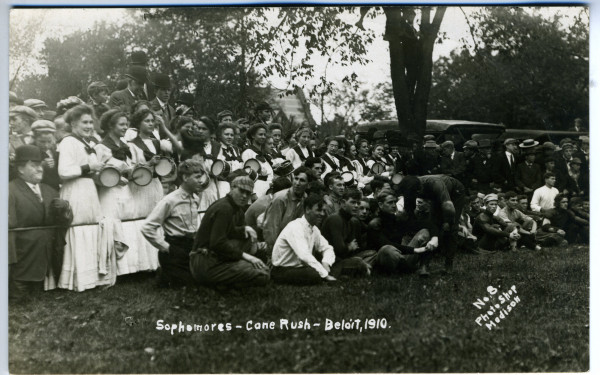 Saturday, September 22, 1906, early afternoon.Seventy-five men from Beloit College’s incoming class of 1910 meet at Professor Robert Coit Chapin’s empty lot on Chapin Street, to strategize, sympathize, and to limber up. In an hour they have a do or die rendezvous with the men of the sophomore class. A few students laugh at the garish green paint slathered on cheeks and chins, while others poke fun at the raggedy old sweaters and tattered woolen shirts donned for the occasion. In the distance they hear the murmuring crowd beginning to congregate at the City Park. The repeated attempts at bravado peter out into nervous conversation. Few know what to expect. A couple of friendly junior class members offer advice and check over the ten stout hickory canes, making sure they’re strong and intact.

By 2 p.m., a boisterous crowd of spectators throng the portion of the park opposite the First Congregational Church. Seventy-five men of the sophomore class assemble on the grounds, watching the line of sophomore women march into the park. The women shout class yells, sing class songs, tootle on pipes and beat on miniature drums. They wear gleaming white dresses accented with bright red sashes and hats, matching their fluttering class of 1909 banners. Representatives of the class of 1910 arrive next, adorned in green sashes and hair ribbons and holding high their handsome green flags. Shouts and songs compete in a fierce but joyful duel and then everyone applauds. 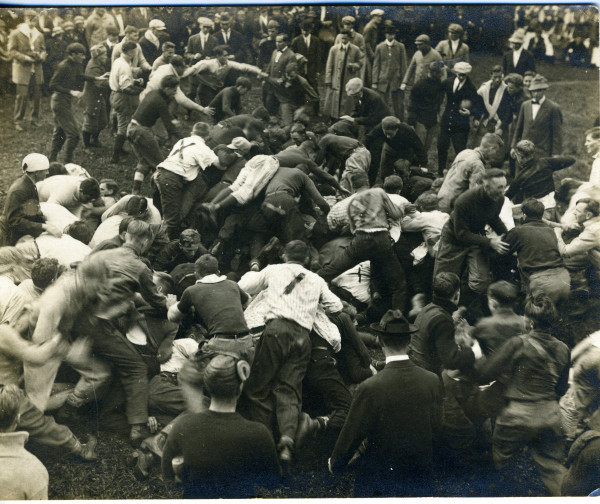 Close to 3 o’clock, the freshmen men appear and the sophomore women serenade them with a Beloit song. Senior Hal Townsend, acting as referee, explains the rules governing Beloit’s annual Cane Rush, an event dating back to at least the early 1890’s when the unsanctioned melee cost students a fine of $5 each, a handy method of college fundraising. Beloit’s faculty tacitly approve today’s event, avidly reported by the local press.

“The contest will last fifteen minutes,” Townsend tells them. “There will be a warning after ten minutes.” The other rules are simple. The freshmen have to protect the ten canes.The sophomores have to break them. If they break more than five canes, the sophomores win the contest.

The sophomore class forms in a wedge-shape and face the freshman. Townsend screams “Go!” and the two sides launch into each other. The largest and heaviest freshmen plop down onto the canes and hold tight while others leap on top, adding a second layer of protection. Oomph! Groan! Sophomores pile on, grasping at clothing and hair and trying to reach the curve-handled canes. Those at the bottom eat grass and feel their muscles stretching, bones bending. African-American student, Sam Ransom, one of the college’s finest athletes, feels his shoulder thrown out of joint, dislocated, although he’ll be back on the gridiron before you know it. Crack! A cane snaps in two and someone hurls it into the air. One down.Then another. The sophomore women cry “’09!” The wriggling mass of bodies writhes in ever greater frenzy, slippery with sweat, grungy with turf and soil, pressed in by the cheering and taunting crowd. Dust clouds rise like smoke, caking eyes and mouths and noses. Crack! Crack! A time keeper tweets a shrill warning - ten minutes down, only five to go. A few weary warriors lie on the ground, panting, no longer grappling, a mutual cessation of battle, while elsewhere the freshmen make their last desperate stand, resisting frantic pulling and tugging with weakening muscles. By 3:15, torn sweaters, ripped shirts, a trouser leg here, a trouser leg there, and eight broken canes litter the ground. After the referees confer, Hal Townsend calls out that the class of 1909 wins the 1906 cane rush and a wild cheer erupts from the women in white and the men in grime. 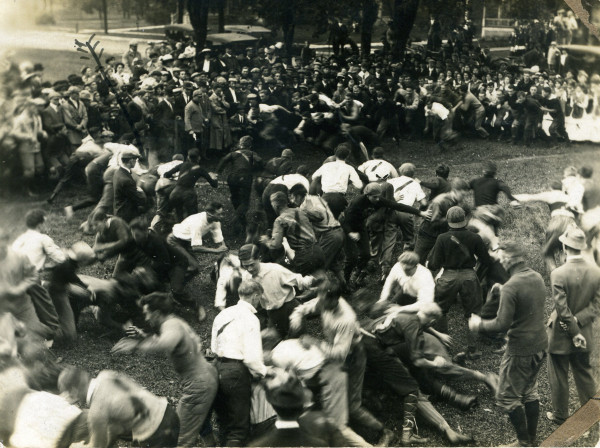 Hours later, the class of ’09 celebrates their victory at a lawn party on College Avenue, hosted by Miss Marjorie Gregory, where they convene under Japanese lanterns and feast on late season watermelon.The freshmen spend a more subdued evening at the home of Miss Hazel McIntosh on Emerson Street, licking their wounds, planning strategy for next September’s encounter with the class of 1911.