Fridays with Fred: beyond the bubble with Big Hill Park 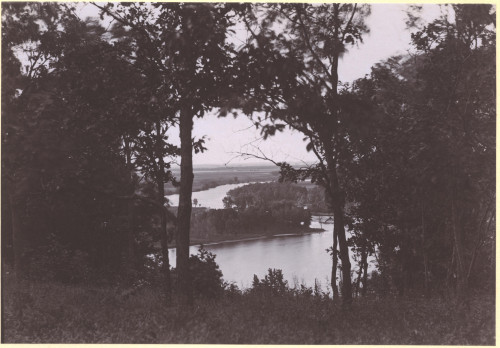 Just north of the city, looming above the Rock River, a steep, forested bluff known as Big Hill has always tantalized and appealed to the Beloit College student eager to commune with nature (and to perhaps temporarily forget about an even more looming exam or paper.)

Before 1926 the property was privately owned but undeveloped. Students enjoyed canoeing and boating across the river, hiking the hill, and picnicking. In October 1906, the College’s Committee on Public Occasions recommended that “if the students so desire” a day be set aside for a fall holiday for the entire student body and faculty.

“Following an old custom of the Eastern Colleges the faculty have determined to try a school picnic, the day to be known as Big Hill Day,” reported the Round Table. “The faculty wish it understood that this is not to be taken as a vacation from studies merely, or a chance to go home, but as an opportunity for bringing the whole student body together.” 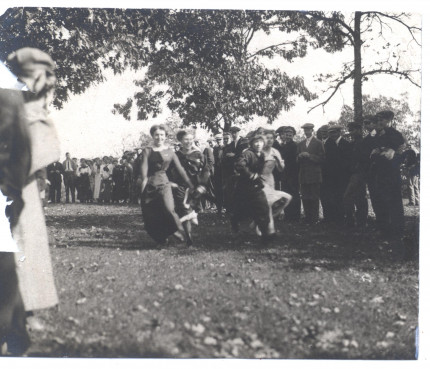 On Oct. 23, specially arranged electric trolley cars left campus at 9:15 a.m. and again an hour later. A number of students boated to Big Hill, while others drove or walked. “Those going by electric were ferried over from Yost’s Park in a launch furnished for the occasion by Fairbanks, Morse & Co,” wrote a Round Table reporter. “By 11 o’clock nearly everybody was on hand, and after the singing of the Beloit song, the regular program of the day began.” Students participated in athletic contests and tests of skill such as sack races and tug of war. There was a “hotly contested ball game between the faculty and the young ladies,” in which to “keep peace in the family” the umpire scored the game a 7-7 tie. “At 12:30 the young men chose their partners for the grand promenade through the leaf-strewn paths of the woody hills and valleys. The march ended at the dinner ground…”

The attendees, numbering over three hundred, heaped their plates high with “roast beef, sweet potatoes, sweet pickles, bread and butter, coffee, apple pie, and apples.” After a satisfying repast, master of ceremonies and senior class president, Charles Boardman, “called upon Professor E.G. Smith, who made a few remarks and closed by presenting crowns of autumn leaves to the victors in the athletic contests.” After several further speeches, each college class presented a “stunt,” an example being a three act drama “portraying the Beloit spirit and its relations to athletics.” Following a baseball game between the freshman and sophomore classes, the weary revelers returned to campus.

Big Hill Day became an annual tradition, lasting through 1927 when, according to the Faculty Minutes that November, upon recommendation of both the Student Activities Committee and the Administration Committee “it was voted that the reference to Big Hill Day be deleted from the College Calendar as printed in the Catalogue…” Subsequent attempts to revive the festival, failed, possibly due to expanded student involvement in Homecoming activities. 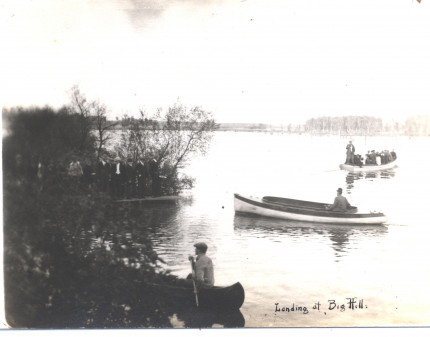 In early 1914 Beloit’s City Council discussed acquiring Big Hill for use as a city park. Many townspeople were in favor of the move and pledged support. That same year, five businessmen in Beloit contemplated purchasing the property to create an amusement park, complete with dancing pavilion, roller coasters and, according to the Round Table, “whirli-gigs and other noise-making and money-making paraphernalia.” The editorial chastised the “sluggish” city council and called for them to “take note of general sentiment and preserve one of Beloit’s rare bits of majestic scenery for the benefit of the city – rich and poor alike…” An editorial two years later recommended that the College buy Big Hill “and preserve it forever as the playground of the college.”

However, it was another nine years before the city took steps to establish the property as a bird and animal sanctuary. On September 22, 1925, Beloit College professor and member of the Beloit Park Board, Theodore Lyman Wright, announced the naming of the new park as “Big Hill Memorial Park,” in honor of Beloiters who served in World War One. In 1926, 4,000 Beloit citizens contributed to the purchase price of 76 acres. A further ten acres came from the estate of Beloit College professor and long-time conservationist, James J. Blaisdell, who had years before opened up his property for use by the public.