An insight into student Vladmir F. Hapala, an exchange student at Beloit, and the occupation of Czechoslovakia. 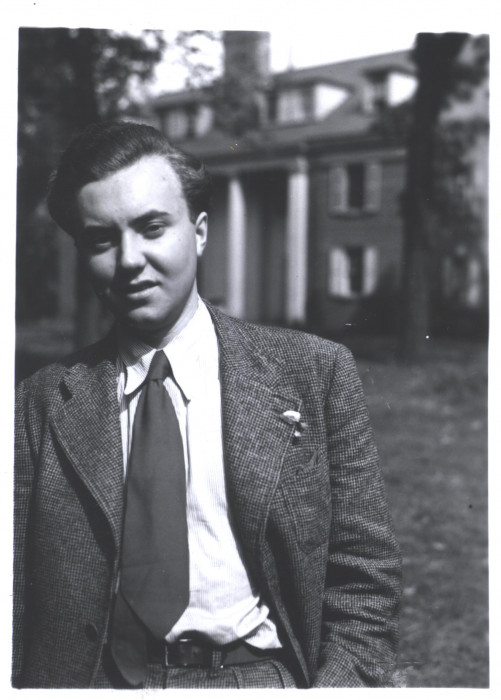 As it is known to you, the Czech nation has lost her most precious estate, her independence. We believe, however, firmly in the truth expressed by our great philosopher and statesman, President T.G. Masaryk, when he declared that no system of administration can be sustained by violence. I am turning to you with a request concerning my son…

I am yours very faithfully and thankfully,

Two years earlier, Hapala’s son, Milan, applied to Beloit College as an exchange student through the Institute of International Education.

“I want to study in America for the reason to be able to make the best of my knowledge of English and all my experiences in America in the study in the school of diplomacy,” he wrote. He had studied English for one year at the Real Gymnasium and two years at the English Institute in Brno, and expressed interest in learning foreign languages and fondness for music and theatre. “Coming back from America I intend to study law at the University in Brno.”

Milan Hapala arrived at Beloit College in September1938, where he lived in “The Haven,” one of two relatively new men’s dormitories. As a junior Government major, he quickly immersed himself in his studies, though he struggled at first. A Round Table profile quoted him as saying, “Though I do not find it too hard to read English books, as yet I have found it quite hard to catch everything that the professor says in his lectures.”

The plight of his homeland was also on his mind. Nazi Germany was in the process of annexing Sudetenland, a region of Czechoslovakia featuring a German minority. “Hitler’s main aim in this territory-grabbing is not to aid minorities, but to get the natural resources that the Sudeten area is so rich in,” he said. “Why Hitler should stop with this small area is not an unanswerable question. He will not!”

Hapala’s prediction came true, as German troops entered Bohemia and Moravia in March 1939, spelling an end to the independent republic of Czechoslovakia. In his letter to President Maurer, Vladimir Hapala wrote, “Though my boy has always written with great enthusiasm about his stay at your College, you will not find it hard to understand that my wife and I were eagerly looking forward to the reunion after a year’s absence. But now, in the changed circumstances, it is impossible for my son to come back. As I am not in the position to support him in Amerika [sic] from my own resources, I beg to ask of you the favour of granting him his present scholarship for another year’s study. I am not able to express my gratitude in any other way except by simply saying: Most sincere thanks to you and to your College for the helping hand you have offered and still may offer to a young member of a nation which is in great trial.”

President Maurer responded, “While a solution is not entirely in sight, I think it may relieve your parental mind when I say to you that I have had the young man in and have told him that if he should wish to spend the second year at Beloit, I will do everything possible to make it available to him…I run into him constantly. He seems well and while, of course, worried, is doing good work and commands the respect of his schoolmates and teachers.” Maurer wrote appeals to the Federation of Czech Societies and to the Institute of International Education, which replied stating that they had received, and could offer, a small fund to help Czech students.

Beloit College arranged for Milan Hapala to resume his studies in September 1939. Hapala’s parents Vladimir and Marie thanked President Maurer for [bringing] “much comfort and peace,” noting that “our life is very hard and full of anxiety as regards the future.”

Just how hard that was, Milan Hapala described in a letter to Maurer just before the new semester: “Letters received from home tell me about the injustice and the brutal persecution of the Czech people in my country. Although there are a few Germans willing to co-operate with the Czechs, the conditions of life are becoming unbearable. Hundreds of Czechs are subjected to unbelievable torture in concentration camps. The wildest stretch of imagination cannot grasp the full significance of the horrors of the Gestapo…Nevertheless, such terror and pressure is creating new opposition and new determination on the part of the Czechs to resist all Nazi efforts to suppress them.”

Milan Hapala graduated from Beloit College in 1940. President Maurer commented in a recommendation letter that Hapala was “one of the outstanding students of this year’s graduating class.” He went on to receive his M.A. at the University of Nebraska and his Ph.D. at Duke University, before serving in the U.S. Army from 1942 to 1945, while becoming a United States citizen. Although he returned to Czechoslovakia briefly after the war, the rise of communism deterred him from moving there permanently. He began his life’s work at Sweet Briar College, where he taught government and economics until 1990, becoming a nationally known expert on Asia.

He passed away in 1992; through the years he remained a proud Beloiter. In spring 1940 he wrote to his parents from Beloit, “While working, I was always thinking of you. The memory of my dear country was a source of inspiration to me. I shall never forget that I have found at this place my second home.”