The history of the 1907 archway that used to accompany the Beloit Poetry Garden. 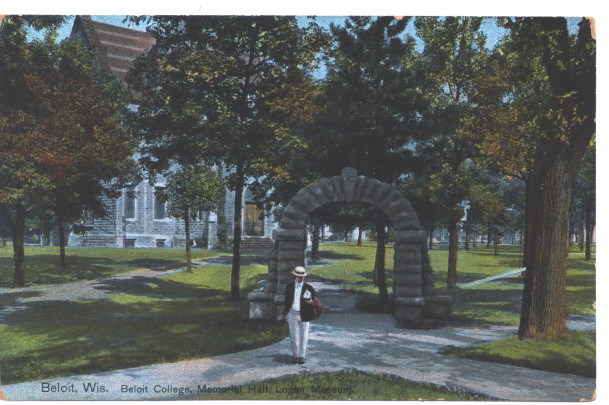 Long before the installation of the Beloit Poetry Garden in 1999, the southeast corner of campus included another distinctive campus feature – the class of 1907 archway, shown here in a vintage postcard. For several years early in the century, classes vied to leave a lasting legacy in stone or concrete. The May 31, 1907 edition of the Round Table announced the class’s intentions: “A beautiful stone arch over one of the entrances to the campus is soon to be erected as the gift of the Senior class to the school…The arch will be constructed of Waukesha stone and will be about eleven feet high by eight wide. The class numerals will be carved on the keystone…The cost is provided for by the profit from the Senior production of ‘The Rivals.’”

The college dedicated its new monument at the annual Class Day Exercises that June. Students met at the corner of College and Bushnell streets. The Round Table reported that “after singing by the class, Harold Townsend made the presentation speech, formally bestowing the arch to the college. The arch was received on behalf of the College by Prof. J.A. Blaisdell. In a few words he pointed out how this anniversary marks the end of Beloit’s infant struggle for a mere existence and marks the beginning of a better time when beauty and art shall be more earnestly sought. Of this latter tendency he said this arch is an indication for it is an element that shows the cultivation of the beautiful that breathes a love for the splendid and noble.” Following the dedication, the class marched through the arch to “Rostra Beloitensia” the large boulder near Middle College given by the class of 1906, where they completed their exercises.

The archway stood for only thirty years. When Eaton Chapel underwent major renovations in 1937, contractors discovered the need for more stones and particularly a keystone for the interior of the enlarged building. The Beloit College Bulletin that October commented that the “archway was just the thing so it was torn down, transported to the chapel and the keystone now is the keystone over a door, in a prominent place for all to see forevermore.” After the devastating fire of 1953, however, the college reconstructed Eaton Chapel and the ’07 keystone made a short journey outside, nestled atop a door opening to the west at the north side of the building, where it resides today a few steps from the rival class of 1908’s “Senior Bench.”

Books For Beloiters: A Curated Reading List by Layna Thompson