Using a Podcast to Transfer Knowledge: Familiar and Effective

There is so much more about being an education major than learning to become a teacher. Finn Brandt ’22 did research about teachers’ unions and activism in Chicago and Japan and created a podcast as a medium to present his work and transfer knowledge even further.

Finn Brandt ’22 double majors in creative writing and education & youth studies with a minor in religious studies. He is the president of one fraternity, Phi Kappa Psi, while being involved in Pocket Lint, dance and theater performance, and amateur drag performance on campus.

Finn’s journey to become an education major may resonate with a lot of students. He knew he had an interest in children’s literature, both as an art form and as a powerful cultural influence. However, he was not sure about choosing education as a career. Though Finn enjoys working with children, he was intensely scared of failure, and how failure in education can have serious ramifications on the lives of his students.

In one of the EDYS classes he took, Comparative and International Perspectives in education and youth studies, Finn has done extraordinary research on the politics of teachers’ activism in the past and present, with a comparison between Chicago and Japan. To listen to this podcast, and get to know more about this interesting topic, click here. 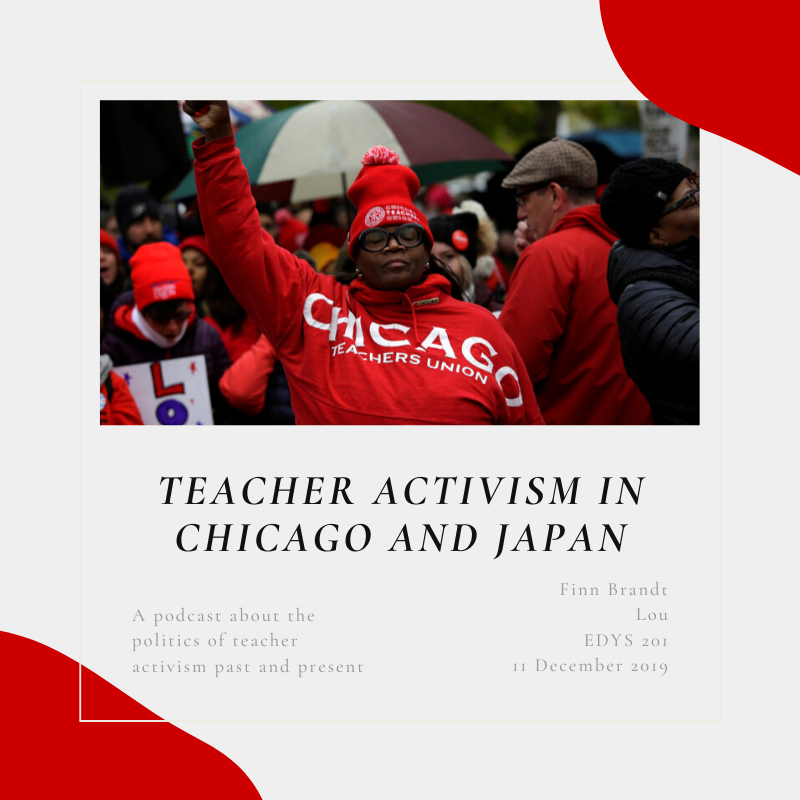 To Finn, the greatest challenge in the whole research process was the language and country barriers. The resources that he could find were largely in Japanese or otherwise inaccessible to him, and spoken word evidence he would like to have sampled was often not translated or again not accessible. One piece of advice that Finn shared is to fully take advantage of the available resources of the Morse Library when doing research.

If you are wondering why podcast is the medium he used to present his research, here are some share of thoughts from its author, Finn:

“Essays are a comfortable method of conveying knowledge; media production is both less familiar and, in some ways, more effective or efficacious. Podcasts, in particular, recreate the way knowledge is transferred in everyday human interaction, by way of oral discussion. Podcasts allow for the use of speech as evidence or testimony. For example, in my project, I examined my own experiences with the Chicago Teachers Union as a CPS graduate as a kind of research. The verbalization of an argument embodies it in human experience and reminds us that all our knowledge is, in some way, about and informed by that human experience. That is particularly important when studying (and practicing) education.”

A unique experience from student teaching in Chicago

Qualities of a Good Researcher

Advice for students: anchor education research in theory and practice