Students entering the new Smith Gymnasium on Dec.1, 1904, heard incessant hammering coming from upstairs. Those who cared to investigate discovered a couple of eager souls installing basketball nets at either end of the gym, attaching them to the indoor track which circled the gymnasium high above the floor. Later that night numerous spectators watched Beloit College’s first men’s basketball team show off its moves. Several students tried out for the team and the Round Table reported that “Ransom went through all the contortions of an experienced man. Sleeper and Strong also did pretty work.”

Invented in 1891 by Canadian physical education instructor James Naismith, basketball had gradually grown in popularity among high schools and colleges, in part because of its fast, exciting action, in part because of its minimal and inexpensive equipment. The sport had been popular informally with both men and women at Beloit College Women played basketball in their gymnasium at Emerson Hall, beginning in the late 1890’s, but for many years men had to put up with an inadequate gymnasium, a small frame building funded by the student body and erected in 1876. ntercollegiate baseball, football and track were all well loved sports among the students and many felt that basketball, given a chance, would soon join the ranks. A Round Table editor seemed hopeful: “The game should prove very popular, as it is easy and interesting to watch…The experience of other schools has showed that basketball is more successful financially than any other branch of athletics.” 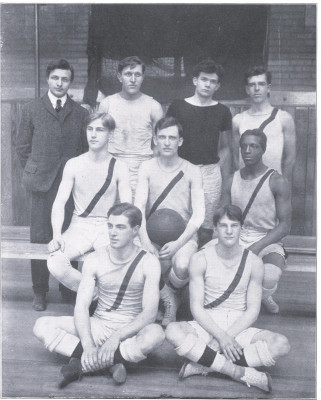 The players, too, (pictured above) seemed confident. Among the starting five was captain and team manager, Walter A. Strong, later publisher of the Chicago Daily News and likely the only Beloiter ever to have a mountain peak in Ethiopia named after him. Strong had three years of experience with the well regarded Lewis Institute team. He became known among his fellow players for never losing hope and for his inspirational mantra, “faster, now, fellows.” Many sources cite Sam Ransom as the first African American to play college basketball. From Chicago, Ransom had starred for Hyde Park High School, which won the first Cook County League Championship in 1901. Ransom was an outstanding athlete who participated in four sports while at Beloit, before leaving to play and coach professionally. In later life he became a prominent civil rights leader in Minnesota, and in 1973 the college elected him to its Athletic Hall of Honor. During the 1904-05 basketball season, a Round Table reporter described Ransom’s prowess on the court: “Sammy Ransom at guard won the hearts of the fans. In a game he seemed to be everywhere covering an almost incredible amount of territory. No man that he played against was able to keep free from him. His cleverness as an individual player was surpassed by his part in the team work…”

On Saturday, December 17, the newly formed team played its inaugural game, defeating the Beloit YMCA, 52-12. The Round Table reported that “the playing of the college men was far below what it had been in practice…frequent fouls marred the work of the college team, all of the points of the Y.M.C.A. men being made by goals from foul.” However, not everything disappointed. “All of the men played creditably…Ransom…especially showing that he is a master of the game.”

Due to winter break, the team did not play again until January, when they traveled by rail to Madison to take on the University of Wisconsin. Unfortunately, two players, including Ransom, missed the train and did not arrive until the second half. Meanwhile, Captain Strong had wrenched his knee on the slippery floor and was out of the game. The more experienced university squad crushed Beloit, 82-10. Although it seems strange today to think of tiny Beloit College playing a much larger university, for many years Beloit’s superior baseball team had roundly defeated the likes of the University of Wisconsin-Madison, Purdue University, Notre Dame, and many others. The Round Table writer took the loss in stride: “It cannot be expected that a new branch of athletics can spring into prominence without long training and veteran support.”

Beloit went on to play eleven more games, facing regional Y.M.C.A. teams, colleges and universities, winning eight and losing three. On March 3, 1905, Carroll College arrived in Beloit for what the Round Table described as “probably the most interesting game of basketball played this season by any of the smaller colleges in the state.” By that time Carroll and Beloit had defeated all of their small college and Y.M.C.A. opponents and considered the contest decisive in naming the state champion among small colleges. The Round Table urged support: “It will be a privilege to see it. Better take advantage of it.”

It wouldn’t be easy. Footsore, weary, battling injuries, Beloit’s team entered the contest in “rather a dilapidated condition,” according to the Round Table. “Strong’s arm was bound up because of a touch of blood poisoning. Moore’s foot was in bad shape and he was obliged to limp most of the time. Banks had been sick for several days – take it all in all the team was in the poorest physical condition it has been in during the entire season.” That said Beloit played its heart out, losing 45-31 in what the Round Table termed a “clean, snappy game” in front of a huge, enthusiastic crowd. The next day they beat the Janesville Y.M.C.A. and then lost four days later to Northwestern University, 37-31 in their final game of the season.

Summing up the season, a Round Table reporter commented on its place in history: 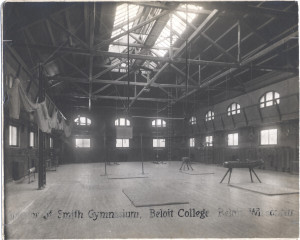 “With our splendid new gymnasium, a new sport has been made possible for Beloit students…we can look back upon the long list of games won with every reason to feel proud of the showing made by the first basketball team that has represented Beloit College.” The 1904-05 season began Beloit College’s road to basketball dominance in the 1940’s and a history filled with fascinating characters and gripping stories.