Every year, the Beloit International Film Festival brings a touch of Hollywood glamor to Beloit. It’s also true that over the past century, Beloit has left a distinctive mark on Hollywood. Many Beloit College alumni have traveled west to work in Tinseltown as screenwriters, directors, producers, and studio executives. Serious thespians and actors-by-accident alike took on substantial roles in box office smashes and hit TV shows. A TV Western idol in his day, James Arness, class of 1946, starred for 20 years as Marshal Matt Dillon in Gunsmoke.

The summer before he entered Beloit College in 1942, Jim Arness (then Aurness) worked in a logging camp in the mountains of Idaho. It was an appropriate experience for the strapping 6- foot-7-inch young man, whom the college yearbook later dubbed “Beloit’s Paul Bunyan.” He had often found himself restless, eager to explore the wider world beyond his hometown Minneapolis. Several times he’d taken off with a friend, crisscrossing the United States and even traversing the Caribbean Sea, in search of adventure. Despite his checkered high school career, however, Arness’s mother urged him to try college. Summer over, Jim sat down and filled out an application to Beloit College, thoughtfully pondering over its many questions:

“What influences led you to desire to come to this institution?”

“What definite vocation, if any, have you considered?”

“If undecided, give present preferences (three) in order of choice:”

An acting career may not yet have been on his radar, but the 19-year-old loved to sing.


“Another personal satisfaction,” he wrote, “has been singing in a fine church choir. It has made me feel that I may want to go on in some field of music, however c’est le guerre and the future is uncertain.”

Less than a year after the bombing of Pearl Harbor, Arness knew it was only a matter of time before he, like so many of his friends, would join the armed forces. Daily news of the war was on everyone’s minds and proved quite a distraction when he reached campus in September 1942. 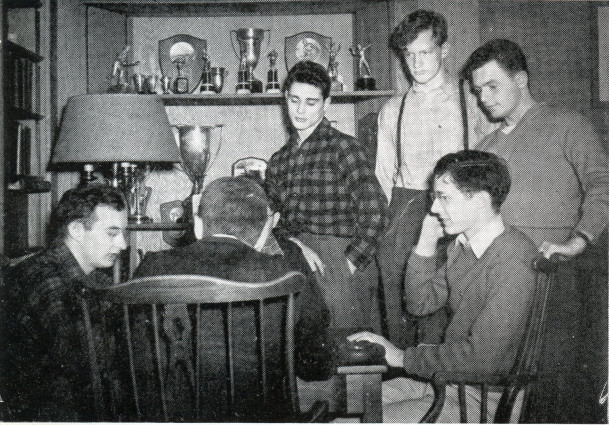 Academics may not have been Jim’s forte, but he clearly enjoyed extracurricular activities, immediately pledging the Beta Theta Pi fraternity and, after a successful audition, joining the college choir. It didn’t take long for the Round Table to praise Jim’s rich baritone voice, as he took solos at Vespers services and at other college programs. In that era, students also did a lot of social singing, and they often gathered for informal sings, even belting out a song or two after meals.

Jim’s useful talent made him popular, and no one could miss spotting the tall, tall, man leaning over the piano directing a chorus of his fraternity brothers.

“Studies kind of went out the window,” he later admitted in his autobiography. “In fact, we never did study. Every night the frat members had a sending-off party for brothers going into the service.”

One day in March of 1943, Beta hosted a going away party for “Big Jim,” who was about to leave Beloit College for the United States Army. He eventually earned several service awards, including the Purple Heart, after participating in the Operation Shingle battle at the Anzio beachhead in Italy, where a Nazi bullet severely wounded him in the leg. 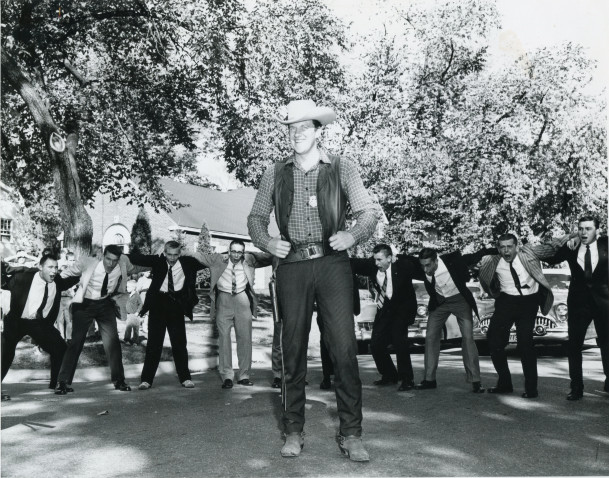 Although accounts vary, post-war found Jim on vacation in California where he visited a friend on the set of a small theater. The director asked him to join the group and at one of their performances, a Hollywood agent singled him out and in no time landed him a part in the Loretta Young film, The Farmer’s Daughter. With his surname simplified to “Arness,” his film career developed slowly, in part due to his unusual height.

“None of the leading men at the studio wanted to be in the same picture with me,” he told TV Guide. “Or, rather, they didn’t want me to be in the same picture with them.” MGM signed him up after his success in the 1949 war drama, Battleground. Then, in 1955, after a recommendation from his friend, John Wayne, Arness began his long tenure as the indomitable star of Gunsmoke, the most popular of a genre that at one point numbered as many as 30 shows. John Wayne predicted that Arness would become a big star and it turned out that he was right. The public responded to Arness’s role as the strong, laconic lawman, Matt Dillon.

Writer Frazier Moore said years later, “The defiant but rueful delivery is so understated he makes Clint Eastwood seem like a loudmouth.” 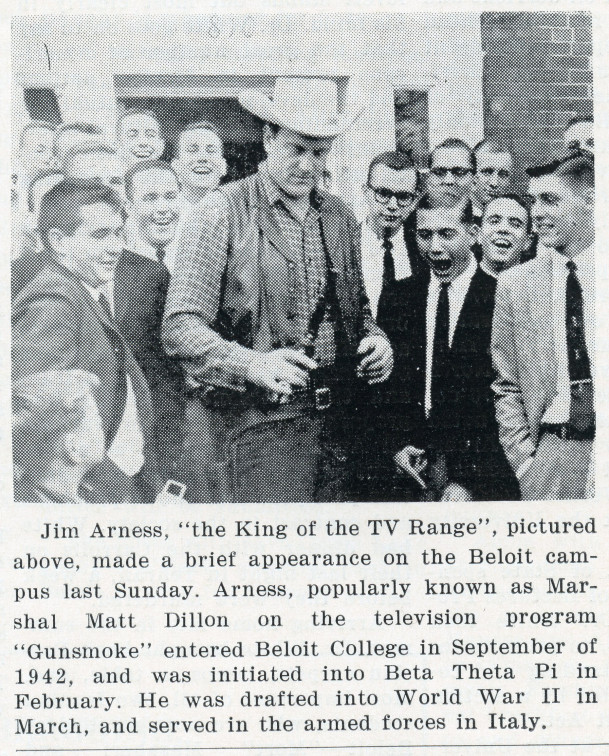 Jim Arness never forgot about Beloit and made notable visits at least twice. “Marshal Dillon came to Beloit Sunday and caused as big a sensation here as he causes weekly in Dodge City,” a Beloit Daily News reporter commented in September 1957. “From the moment he arrived Arness was mobbed by children from 8 months to 80 years who pushed, shoved and elbowed fellow citizens to get a peek at the star of Gunsmoke…Upon arriving he was met with a total traffic jam of cars, kids and parents…” Arness was in town to promote the new showroom at Vic Hansen and Sons, a local auto dealership. He signed autographs, posed for photographs, and addressed a crowd of 10,000. Although he’d hoped for a quiet visit to the Beloit College campus, a mob followed him there. He met with fraternity brothers at the Beta Theta Pi house on College Street, where he joined them for some old familiar chapter songs and posed with them for several photographs. 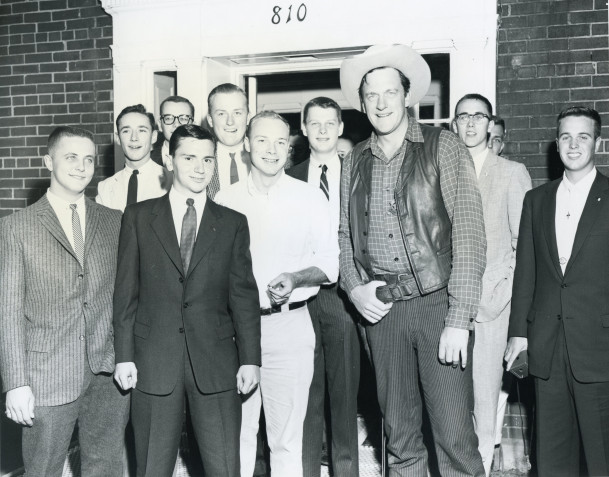 Arness returned to Beloit again in July 1960, at the invitation of the local Jaycees. “A melee of kids, TV and radio interviewers, and the general public” greeted him at the Rock County airport, according to the Beloit Daily News. “After a brief welcome to the city, the ‘Marshal’ was delivered into the hands of the crowd for a picture taking and autograph session.” Arness appeared at the college’s Strong Stadium for 1 p.m. and 7 p.m. pony shows. 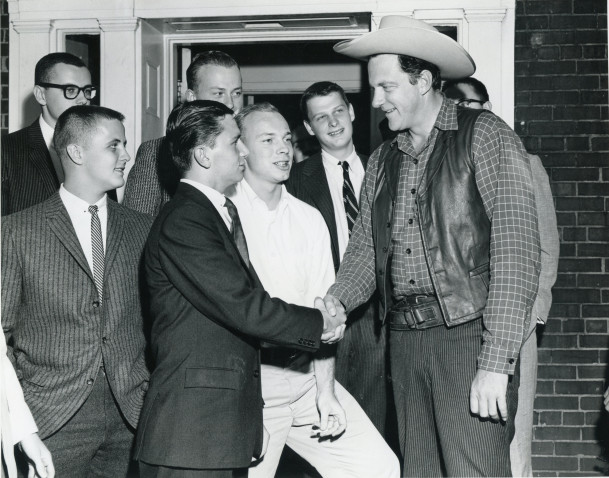 As the years passed, the public’s taste for Westerns waned, and by 1975, when Gunsmoke went off the air after 635 episodes, it was the last of its breed. Arness continued to act, starring as detective Jim McClain in McClain’s Law, and appearing in the acclaimed, How the West Was Won TV miniseries. He passed away in 2011, aged 88. Summing up James Arness’s Gunsmoke legacy for a Washington Post obituary, Matt Schudel wrote:

He was the embodiment of quiet moral authority, a sensitive arbiter of conflict in a rough-and-ready cow town – ‘Gomorrah of the plains, they call it,’ as he said in the show’s first episode. Only when pushed to the limit would Marshal Dillon pull his six-gun from its holster.