In our interview, Saad Ahsan’21 and Pathik Rupwate’21 talked about working together to raise the visibility of BSG and increase its effectiveness.

Five candidates competed in the fall 2019 BSG election for co-president, earning a combined total of 298 votes. Shortly after their election, front-runners Saad Ahsan’21 and Pathik Rupwate’21 sat down with Hiroaki Tani’ 20, a student worker in OIE, to talk about the kinds of experiences that led them to seek election as well as how they hope to contribute to the student community as the next BSG co-presidents.

H: Congratulations on winning BSG Co-President Elections. Could you introduce yourselves?

P: My name is Pathik Rupwate, I’m a junior majoring in Computer Science and Quantitative Economics. And I’m from Mumbai, India.

S: My name is Saad Ahsan, I’m a junior majoring in Quantitative Economics and Mathematics. And I’m from Lahore, Pakistan.

H: So here’s the first question. Why did you run in this election?

P: I definitely wanted to be involved in everything that goes around the campus. I was a part of International Club (I-Club) last year and that was helpful for me to make more friends, know what’s happening on campus, and learn how to get stuff done. I was not sure what this position was about at first, but I talked to Mashifik, the last co-president, who told me about the duties and responsibilities. It sounded very interesting to me because the co-presidents actually helped students in many ways. Last year, for example, the co-presidents helped run a program to supports students’ mental health. They also helped secure more funds for C-Haus.

S: As for me, I had served as Beloit Student Government director of communication and marketing, so I already felt involved. At that time, the student government was on one level, but never went to the next level in terms of legitimacy and how students see the organization. And since I had been involved with on the student side as I-club President and on the administrative side as an RA, I was able to understand each side’s concerns. Thus, I thought I could have positive impacts on the student government. Moreover, as an international student, I though that by being BSG co-president I could represent the international students’ community on this campus.

H: As you saying that the BSG should encourage more interactions between students and administrators?

S: Well, I’m more concerned about how students view BSG. BSG did solve some students’ issues and has worked with administrators, but I don’t think BSG has enough presence on campus.

H: Right. You guys also talked about your previous experience being involved with the campus community in different ways. Could you talk about how that helped prepare for this position?

S: Serving as a president of I-club and as an RA and being a part of sustained dialogue gave me opportunities to connect with a more diverse range of people on the campus -first years, seniors, domestic and international students. And this helps me to understand students’ concerns and frustrations and to gain problem-solving skills, especially as an RA. Not everyone is entirely right and not everyone is entirely ever wrong, right? It’s just all about communication. The multiple positions I’ve held have helped me to be a good communicator and be a bridge between two different sides. 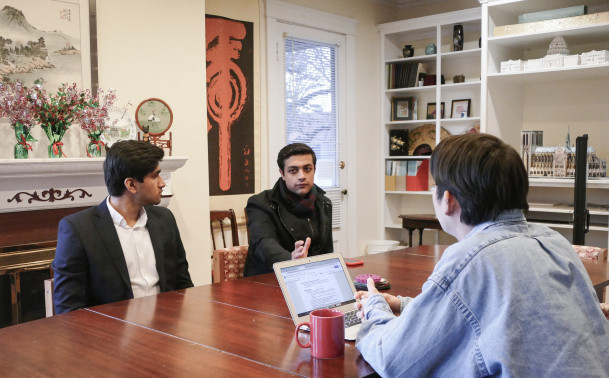 The interview at OIE

H: What do you think about being a student government president in the U.S. as an international student?

P: We also have quite a large international student population on this campus, so I think we can understand their concerns more than domestic students can. But again what we want to achieve is to help the entire community and to  improve the quality of their campus lives for both domestic and international students.

H: Could you share any specific goals you want to work on as a co-president?

P: Personally I want to be involved with everything I can. One thing is to keep taking care of what Mashifik left for C-Haus, which is exciting because I love going to C-Haus.

S: I want BSG to be an organization that people think of first whenever they have issues on campus. One way of doing that is to have a space for BSG at the Powerhouse, which is one of the projects I have in my mind.

H: Both of you have come different backgrounds. How do you guys want to help and collaborate with each other as co-Presidents?

P: “We’ve been good friends since we came to Beloit, and we worked together in I-club, so we know how to work together better. Other than that, I want to have a relationship in which we support and help each other whenever one side needs help, and we divide tasks smartly and productively.

S: Yeah, I agree with that. I want to be there whenever he needs help and to work together with other executive members.

It is interesting to have international students as co-presidents of the Beloit College student government. Pathik and Saad, even though they have different backgrounds, understand what the entire community is looking for due to their previous experience of interacting with a wide range of students including domestic and international students at a leadership level. We’re looking forward to having them as the next Co-Presidents and seeing their exciting projects! And thank you Li Zhengyue ’20 for amazing pictures. 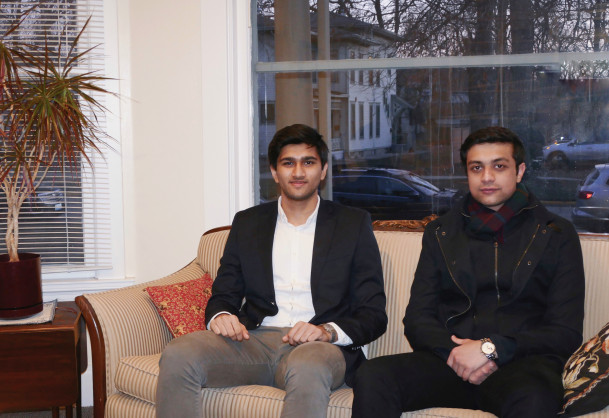