Fridays with Fred: A timeline of doodles

A brief look at doodles and cartoons from Beloit College students and faculty through the decades.

Perhaps Beloit College’s earliest students doodled in class while conjugating Latin verbs. Perhaps one day we’ll turn up an ancient leather-bound copy of Virgil and discover a wicked sketch of Professor Joseph Emerson scrawled on a flyleaf. Evidence confirms that cartooning became a Beloit passion well over a century ago. Beginning with the class of 1890 yearbook, the Codex, Beloit students publicly poked fun at college life, from parodies of student activities to caricatures of favorite and not-so-favorite professors. “Beltoons,” as I like to call them, reflect their specific time periods, both in artistic style and in subject matter and yet many retain timeless humor, as funny today as they were long ago. I’ve selected an even dozen out of hundreds.

Although most Beloit College cartoons feature artwork created by its own students, the 1892 Codex made good use of outside artists, courtesy of the Binner Engraving Company of Milwaukee. Their artist, S. Crosby, depicted the drastic effects of a Beloit College education in molding young men. 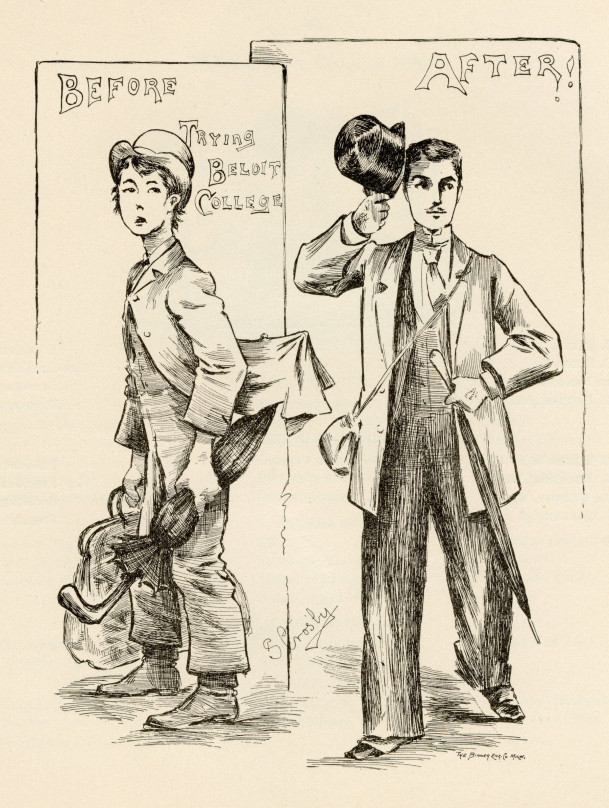 Appearing in December 1893, the class of 1895 Codex featured a section entitled, “How ’95 Answers the Co-Educational Question.” “Oh, how glad we would be to welcome girls to our sacred halls, to encourage us in our class games and to sympathize with us in our flunkings,” wrote one student. “Personally, I am not hankering after the women,” wrote another, “but if Beloit can stand it I guess I can.” Although the responses were tongue-in-cheek in nature, the majority of Beloit’s students wanted coeducation, including one who joked, “If they are all under thirty-five I don’t mind.” Faculty and trustees concurred and women entered the college in the fall of 1895.

The 1897 Codex noted the advent of coeducation under the title, “The Coming of the Woman:” “…There came a stranger, Woman by name, unto the sacred portals of Beloit College, and she did knock and in somewhat meek but steadfast tones did ask to be admitted…she thought in her mind to keep high the standard of this goodly college, she set herself to work, and from that day she let not herself fall behind in the race.” 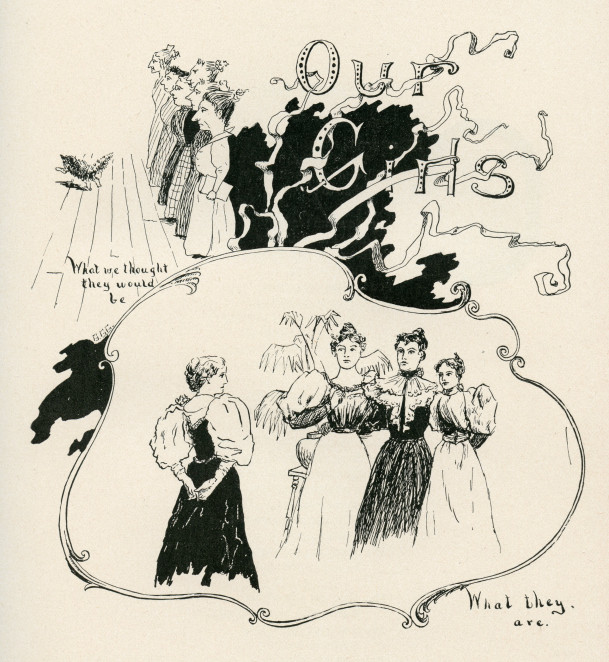 Every generation of students wonder about its post-Beloit future. The 1895 Codex pictured a worried looking gent in a bowler hat pushing a baby carriage. The college literary magazine, Satyre, took the theme even further in 1956, as illustrated by cartoonist Marvin Knopp. 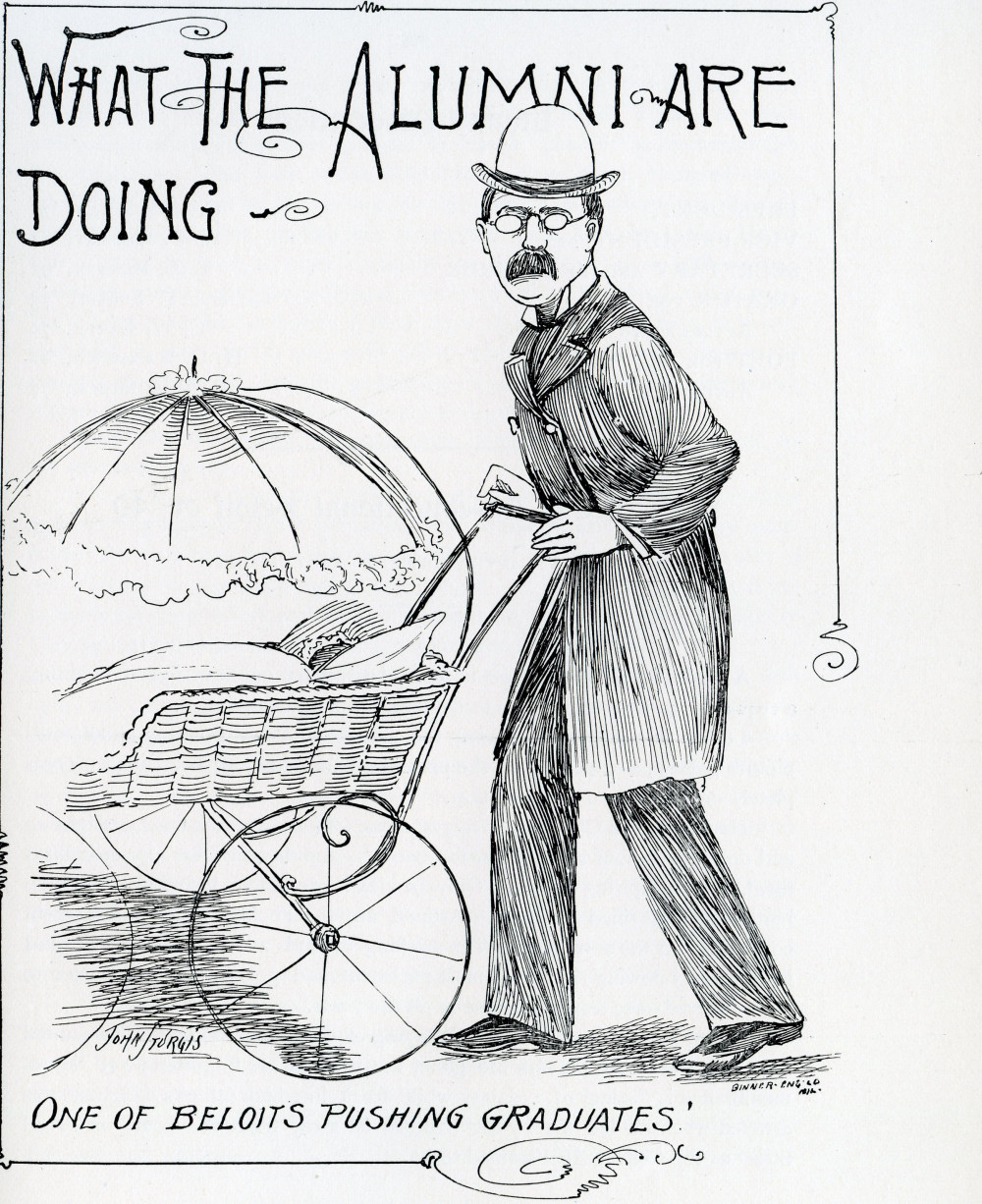 Several Beloit College students have gone on to major careers as professional cartoonists. Most famous was Jay N. “Ding” Darling, class of 1899, who twice won the Pulitzer Prize for editorial cartooning. The 1899 Codex featured many of his drawings, including this parody of the popular cartoon character, the “Yellow Kid.” To my mind, however, the drawing looks remarkably like an infant Alfred E. Neuman, who did not appear in Mad magazine until 1955. Did Mad’s artist ever see the Darling drawing? Probably not, but as Alfred would say, “What, me worry?” 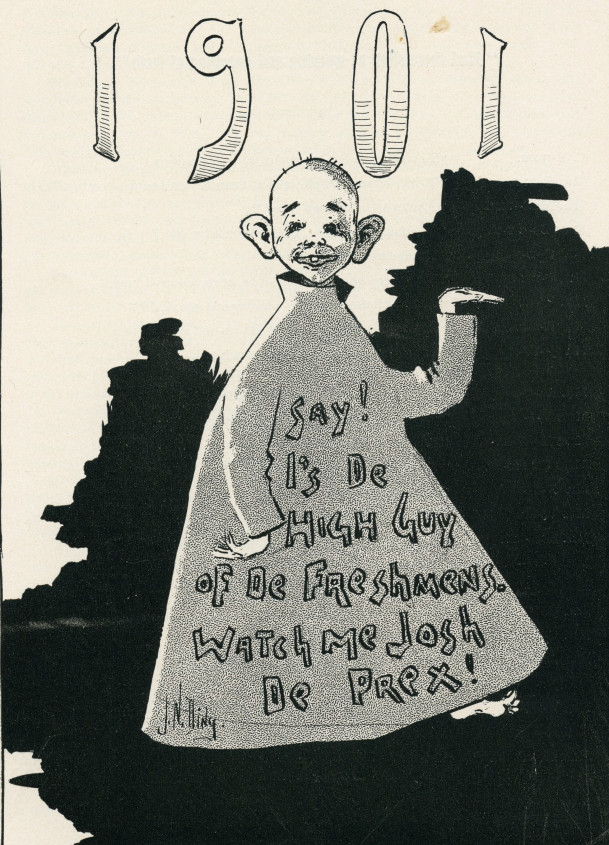 Theodore Chrischilles, class of 1912, kept a copiously illustrated diary during his two years as a student at Beloit College. At the end of every semester he drew several detailed cartoons portraying a typical student’s deathly fear of exam week. Theodore may possibly have spent more time on his diary than “bucking” for exams. 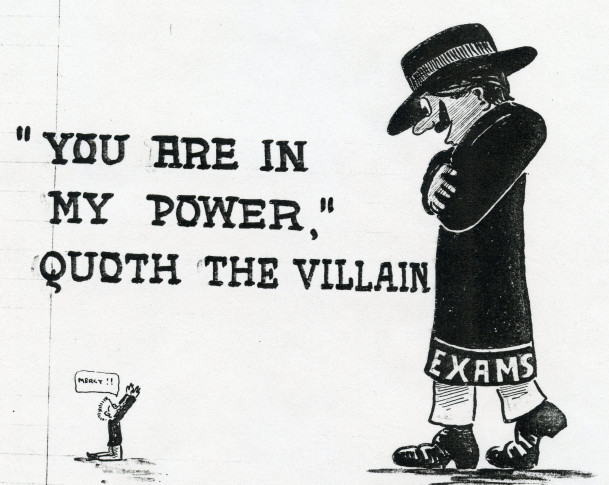 Students were not the only college cartoonists. One of the most prolific was Professor of English, Montagu Modder, who specialized in editorial cartoons for the Beloit Daily News and elsewhere. During 1952 and 1953, Modder drew covers for the college magazine. Each collage of drawings brought to life campus activities during a particular season.

By the late 1960’s, Beloit’s yearbooks rarely featured cartoons, but occasionally the Round Table and a variety of underground newspapers included single cartoons or comic strips. This drawing from the May 31, 1968 issue of the Round Table is one of many ushering in a new psychedelic consciousness during the year following the “Summer of Love.” 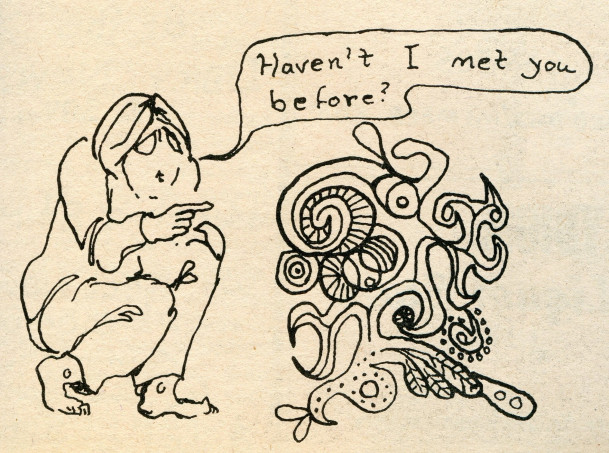 In 1983, artist Kirk O’Brien drew Beloit College President Roger Hull as a superhero blasting through Middle College. The flipside of this Gold yearbook cover, however, shows frightened students in front of a billboard advertising the film, Let’s Get Fiscal. At the time, the college was still recovering from more than a decade of financial stress. 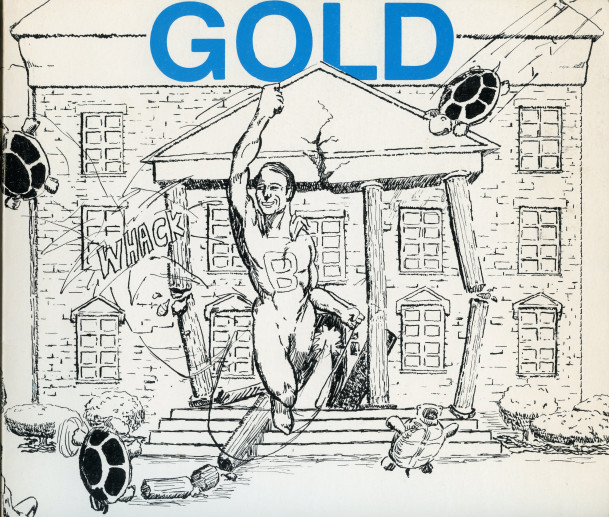 “Turtle Tales,” written by Kevin Douville, with artwork by David Stephens, appeared in the Round Table in the fall of 1984. This example covers such perennial topics as student government apathy, the use of campus space, the ever-changing locations of student housing, and the relevancy of the campus newspaper. 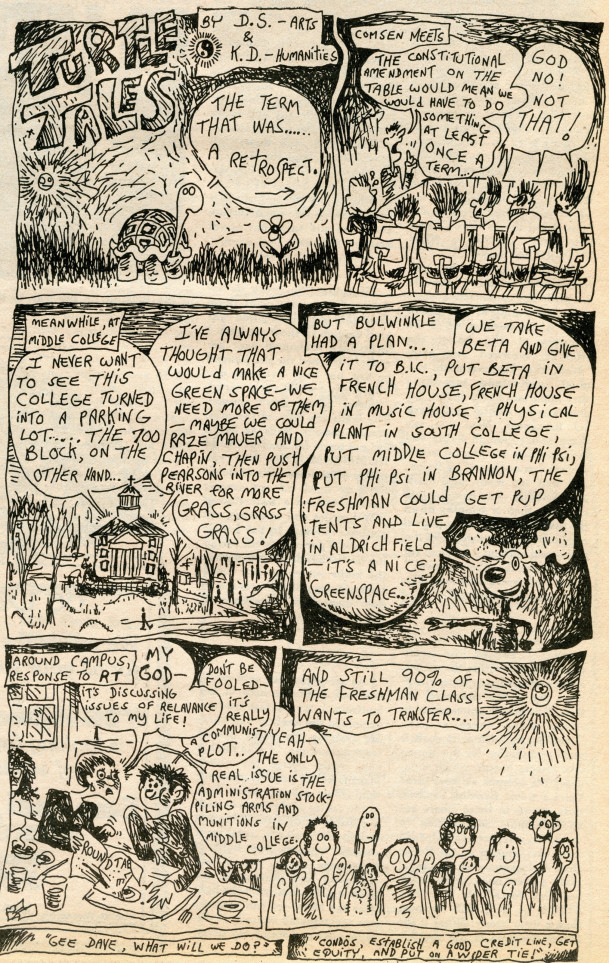 The Round Table featured another comic strip in 1998, “Small Hill University,” written and drawn by Susan Sieber. Her close observations of campus culture capture the Beloit ethos to perfection.