One of Beloit College’s 2010 inductees into the city of Beloit’s Hall of Fame is sixth president Miller Upton, who served the college from 1954 to 1975. 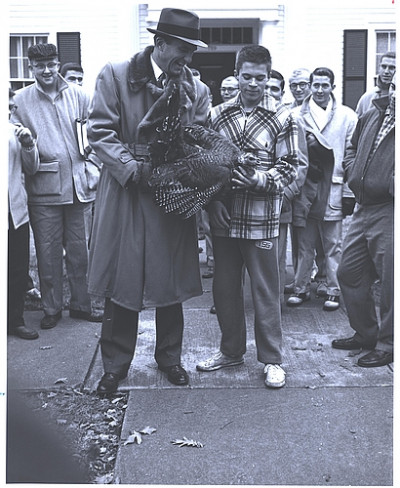 Upton hailed from New Orleans, graduated from Tulane University and, prior to Beloit, taught at Washington University in St. Louis, Northwestern and Lake Forest. During his administration, he oversaw Beloit College’s return to the Midwest Conference, the creation of the World Outlook Program and, beginning in 1964, the experimental Beloit Plan which transformed the college from a regional to national institution.

The Beloit Plan included an innovative year-round calendar, required field terms and common courses and emphasized interdisciplinary majors and experiential learning. During the Beloit Plan years, Miller Upton guided the College through the challenges of changing times and student unrest of the Civil Rights and Vietnam eras. Chamberlin Hall, Godfrey, Neese Theatre, and the ’64 Dorms were among some of the buildings constructed during Upton’s tenure, but perhaps his favorite was the Colonel Robert H. Morse Library, dedicated in 1962. At his Opening Vespers talk, Upton remarked, “We have demonstrated in this new building of ours that a college library, far from being a mausoleum in which dead bodies are interred, is rather an intellectual Valhalla where the ideas and souls of mankind’s heroes throughout the ages are given eternal life.” After retirement, Miller Upton remained an active supporter of the college. He passed away on December 19, 2005 at the age of 88.

Miller Upton enjoyed participating in many popular student activities, including starting off this 1957 pre-Thanksgiving Turkey Trot, in which freshmen competed in a half mile race across campus. The first student over the finish line earned a turkey, second place was a goose and third place a chicken, while the student coming in last had to console himself with one egg.

Books For Beloiters: A Curated Reading List by Layna Thompson