Senecan Tragedy in the City of Rome

Associate Professor of Classics Lisl Walsh discusses the concept of place for Roman playwrights at this year’s inaugural Faculty Forum. 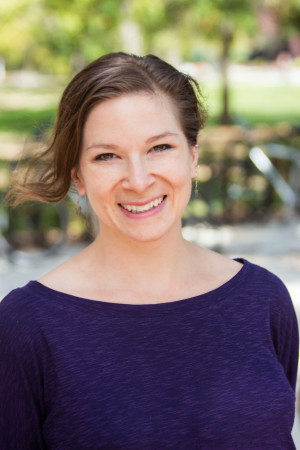 Associate Professor of Classics Lisl Walsh Credit: Jishnu Guha Digital DesignsA Roman citizen sitting in the Theatre of Marcellus near the Roman Forum, maybe halfway through the first century BCE, wouldn’t have seen the Tiber River, but they would have heard it. Then as now, the river flowed past the theater, immediately behind the stage that spectators faced to watch performances. From inside the building, the water was loud enough to make it into a few theater-goers’ diaries.

While that may sound a little distracting, Associate Professor of Classics Lisl Walsh proposed during this season’s inaugural Faculty Forum on Wednesday, Sept. 18 that such a feature might have been the perfect prop for certain ancient Roman playwrights.

That’s the premise of Walsh’s current book-length project on “performance context,” through which she explores a hypothesis that she summarized in this way: “when you put a play in a place, the meaning changes.” (Walsh was inspired by the theorist Karen Barad’s idea, in turn, inspired by the work of physicist Niels Bohr, that, as she recapped, “when you put two objects together, their meaning is only determined at the time when they meet.”) Each chapter of the book puts a different play in a different place, then asks how each text might have interacted with that venue’s “agency.” At her forum, titled “Senecan Tragedy in the City of Rome,” Walsh offered a preview of one of those chapters, which places a performance of the stoic philosopher Lucius Annaeus Seneca’s play Agamemnon into the Theater of Marcellus.

The chapter does so in spite of a lack of evidence that Seneca’s Agamemnon was ever performed there—in fact, in spite of a lack of positive or negative evidence that any Senecan tragedy was ever performed in ancient Rome. And that lack of precision is precisely what Walsh, whose primary field of study is Seneca’s tragic plays, finds so enthralling about her project. Classics scholars are “working with pieces of an unknown-number-of-pieces-sized puzzle,” she explained, and they “don’t know how much we don’t know. We potentially have a lot, and we potentially have a little bit.”

That means lifetimes spent scrutinizing what evidence is available, but also a lot of “making stuff up,” in Walsh’s own words, to fill in the gaps. Walsh is a proponent of abandoning any historical research project that aims to definitively prove what actually happened, and of “instead allow[ing] for there to be multiple possible ‘what actually happeneds,’” she explained. “What I’m proposing is not really what happened, but it is a possibility, and it’s just as defensible as any other possibility that has been proposed.”

And when it comes to proposing possibilities, “we don’t have to be vanilla,” she added.

Walsh explained that Seneca’s version of the mythological life of Agamemnon made a point of catering to its Roman audience. It contains dozens of echoes of Virgil’s Aeneid, which well-educated Romans would have known by heart. In addition, Romans considered themselves to be descended from the Trojans, who were defeated by Agamemnon and his Greek army in the fabled Trojan War; in this version of the play, Agamemnon’s eventual death is celebrated rather than mourned by surviving Trojans.

Those survivors were said to have eventually migrated to the site of Rome and founded the city on the banks of the Tiber River (as depicted in the Aeneid). If Seneca’s Agamemnon had been performed in the Theatre of Marcellus, the rushing water just outside wouldn’t have been an interference, said Walsh. Instead, it would have become a character in the play.

Walsh finished her forum by taking questions from other faculty in attendance.

Keeping Social from a Distance