Mounds and the Museum

A brief history of Beloit College’s relationship with the Mounds.

How has the college treated the mounds, and how has the college—the Logan Museum of Anthropology in particular—interacted with the region’s indigenous people? These questions have long and complicated answers, but here we address a few of the key points.

First, let’s clarify the terminology. The campus mounds are all Indian mounds and burial mounds, but they are not all effigy mounds. An effigy is something made in the image of an animal or human. There is only one effigy mound on campus: the turtle mound on the hill behind the Wright Museum of Art. All other campus mounds are conical (round, or hemispheric), oval, or linear mounds. So the campus does not have effigy mounds; it has one effigy mound—which is itself also an Indian mound and burial mound—and it has 19 conical, oval, and linear mounds.

These 20 mounds, plus a possible remnant just off campus, are what remain of the original group of 25. The loss of five mounds occurred before mounds received legal protection. Until 1986, Wisconsin offered no protection for ancient burial places, including mounds. The 80 percent mound survival rate on campus contrasts with the 80 percent mound loss rate throughout southern Wisconsin. Since the early 1800s, mounds have been leveled or destroyed by farming, development, erosion, or looting. Some mounds, including several on the Beloit campus, were excavated by archaeologists. Beloit anthropology classes periodically excavated test squares and trenches to learn about mound structure and contents and to train students in archaeological methods.

Campus mound excavations ceased in the 1970s around the time Logan Museum staff, faculty, and students began working closely with Native people in northern Wisconsin. Fieldwork on Madeline Island and on the Red Cliff Reservation (the home of the sovereign Red Cliff Band of Lake Superior Chippewa) led to close relationships with tribal members and reburial of human remains on tribal land long before such repatriation was required by law. 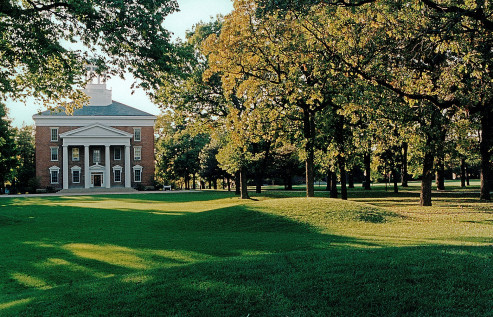 Beloit played a key role in the state law that protects all burial sites including mounds. In the mid-1980s, residential development threatened a Native cemetery on Madeline Island. Findings from Beloit archaeological field schools, along with Ojibwa oral histories, demonstrated the site’s significance and led to its preservation. Seeing the need for a statewide solution to the destruction of mounds and cemeteries, Wisconsin’s Legislative Council appointed a committee to draft a law to protect all burial sites. The committee’s membership included tribal representatives as well as archaeologists and anthropologists, among them Dr. Robert Salzer from Beloit College, Dr. Lynne Goldstein’71 (then at the University of Wisconsin-Milwaukee), and myself (then at the State Historical Society of Wisconsin). Over a two-year period, we drafted legislation that was passed nearly unanimously. The law increased awareness of and protection for burial sites throughout the state. Known sites—including the Beloit College mounds—were entered into a statewide catalogue of burial sites. Tribal officials and the State Historical Society review any proposed disturbance to such sites.

Meanwhile, we were trying to ensure the campus mounds were treated properly. After consulting with Ho-Chunk tribal officials, we asked Physical Plant to use hand mowers rather than tractor mowers on the mounds, reducing the chance of inadvertent damage. The Ho-Chunk cultural resource staff also conducted a pilot ground-penetrating-radar survey on campus to try to detect remnants of two of the “lost” mounds. Shannon Fie’s Principles of Archaeology class followed up on this work with a more extensive geophysical (non-invasive) survey of the mounds and surrounding areas.

The Wisconsin Inter-Tribal Repatriation Committee (WITRC) invited the Logan Museum to partner with them to determine tribal affiliations of cultural items from mounds and other Native material in museum collections. Building on the Logan’s compliance with federal repatriation law, this effort fostered working relationships with tribes around the state. The museum also consults regularly with tribes in other regions. We have repatriated funerary and sacred objects to tribes, and in some cases hold such objects in trust as requested by tribes. We have even consulted with Inuit First Nations about collections from Canada. In recognition both of mound preservation and repatriation, the Logan Museum organized a Weissberg Program panel in 2015 on “Indigenous Cultural Heritage Preservation and Repatriation: International and U.S. Perspectives.” Panelists included the Ho-Chunk Nation’s Tribal Historic Preservation Officer.

After Wisconsin tribal members and allies quashed an effort to weaken the state’s burial protection law in early 2016, a new Legislative Council committee worked for more than a year to revise and clarify the law. I was the only member of this committee who had also served on the 1985 committee. The result was enactment of clearer guidelines for tribal and public involvement in the preservation process.

Earlier this year, Shannon Fie and her students were instrumental in setting temporary markers around mounds during Commencement to minimize foot traffic across the mounds. Another of Shannon’s class projects resulted in a statement about the mounds—”The Significance of Place”—in the Commencement program. President Bierman’s introductory remarks included our statement acknowledging both the sacredness of the site and the Native nations on whose land the college was founded:

“We recognize and honor that the land on which we gather is a sacred, indigenous place located within the ancestral territories of the sovereign Sac & Fox, Ho-Chunk, and Potawatomi Nations as recognized by treaties between those Nations and the United States of America.”

This kind of statement is common in Canada and increasingly so in the U.S.

There are some easy-to-access resources for anyone interested in learning more about the campus mounds. A good place to start is the “Beloit College Mound Group” exhibit in the Godfrey Anthropology Building lobby. The exhibit includes a bronze plaque placed on the largest mound in 1924; upon tribal requests, we did not reinstall the plaque after it detached from its base. Then, check out the articles, maps, and other documents at the Campus Archaeology Moodle Group. Anyone wishing to do more work on these topics or with ideas about new ways to protect the mounds and honor their builders is invited to contact Shannon Fie or Bill Green.

The Creative Minds and Murals of a Favorite Campus Home