Fridays with Fred article detailing the different poems written about the college.

A student sits at his desk in North College (today’s Campbell Hall), tapping his pen. As the evening sun slips behind the factory across the river, only the pale light from a single lamp illuminates the blank page in front of him. It’s an age-old story for anyone attempting literary work – what to write about? He looks up at the rough plastered ceiling, pondering, and then hunches over the paper, dips his pen, and writes.

Countless poems and songs grace the pages of long ago issues of Beloit College publications. The earliest often reflect the influence of the college’s classics-based curriculum, but students also expressed religious fervor, considered love and nature, or enjoyed lampooning college life. They also wrote about their environment, particularly the buildings they spent the most time in. 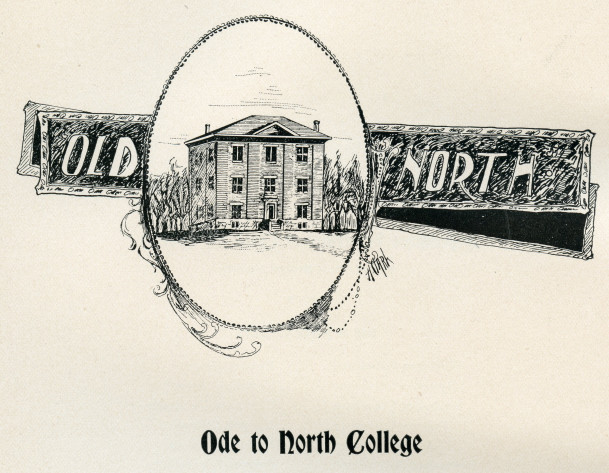 Our anonymous student above composed his “Ode to North College” and published it in the 1897 yearbook, The Codex:

Though thine outlines are not comely,

And thy gables were not builded

By the plans of later

Though the other halls built lately,

Far more graceful are, and stately,

Love for thee will ne’er depart.

How the men now old and hoary,

Once beneath thy humble shelter,

In the years that long have flown,

Fought their passions, fought and crushed them,

Grappled wrong desires and hushed them,

Claiming victory as their own.

Tell thou could’st of sweet communion

Held by those in friendship’s union,

Which did to disheartened brother,

Tell thou could’st of joyous laughter,

Thoughts of which in sorrows after,

Dreams of nations as one’s vassals,

Thou hast seen them oft repeated:

Oft they came, as oft, have flown.

Many lessons thou could’st tell us

Which would to rewards impel us,

As their well-fought lives have shown.

Deep thy bricks with names are written,

Names, that when thy walls are smitten

Of the all-destroying time;

Written then on page more lasting

Brightest luster round them casting,

Shall for generations shine.

Though thine outlines are not comely,

And they gables were not builded

By the plans of later art;

May the lessons thou has taught us,

May the blessings thou hast brought us,

Never from our lives depart. 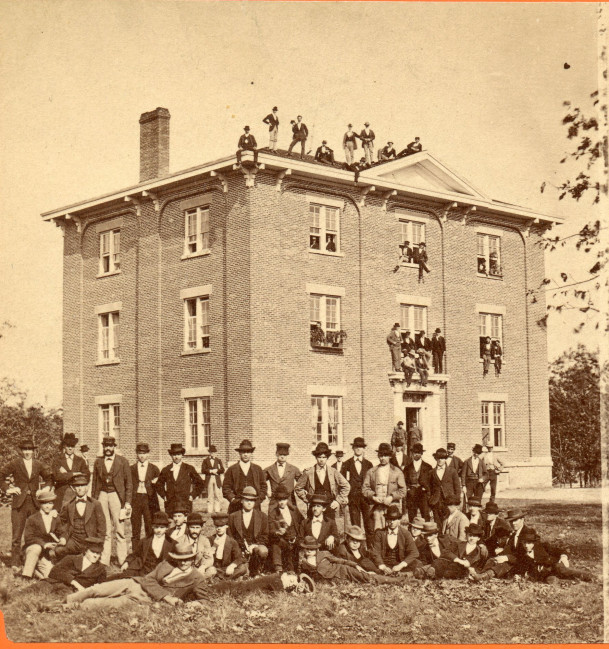 Since 1891, Eaton Chapel’s bells have rung for services and events, reminded students and professors to hurry up for classes, and kept a few squirrels up way past their bedtime. The bells survived a disastrous 1953 fire and continue their clanging today, every fifteen minutes. Their chimes have also inspired poetry, including this one by an anonymous author, published in the 1899 Codex: 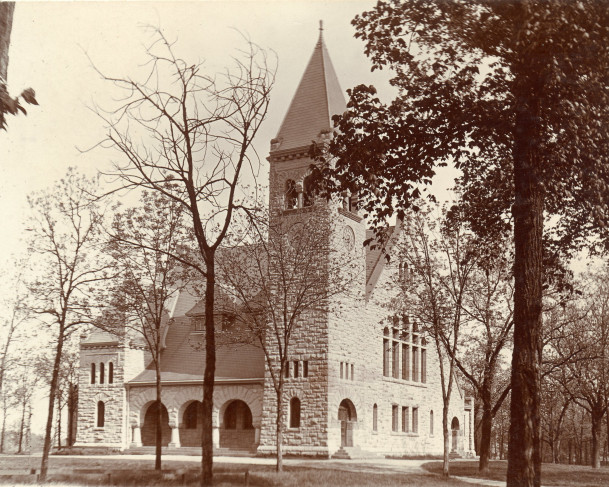 Oh there is music in thy ringing

To me, than organ’s tones, or singing

That ever swelled from mortal throats.

In early morn when day is breaking,

Thy sounding voice is ever heard,

From slumber into new life waking,

Both man and beast and tuneful bird.

The time into its parts dividing,

Thy chime rings through the fleeting day,

The hours for work and rest deciding,

The time for study and for play.

And then as evening-tide draws nearer,

More joyously thy call rings out

To summon all for service dearer,

To chapel song and prayer devout.

Methinks I hear thee ever saying,

In ringing accents sweet and clear,

“Be true and noble, always praying,

And never weakly yield to fear.”

I would that thou mightst ring forever,

The youth, who gather here, with ever 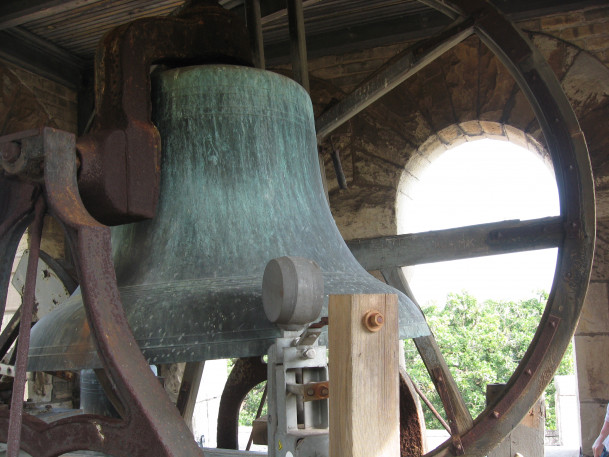 College buildings also kindled the literary fires of professors, particularly on important occasions such as a groundbreaking or dedication. One such noteworthy ceremony took place on July 9, 1867, when the college broke sod for Memorial Hall, built to honor the many college and city soldiers who perished in the Civil War. The building would serve as the college’s library and as home to the “College Cabinet,” an ancestor of today’s Logan Museum. Professor James J. Blaisdell composed a hymn for the event, sung by the audience at the very moment workmen set the cornerstone in its place: 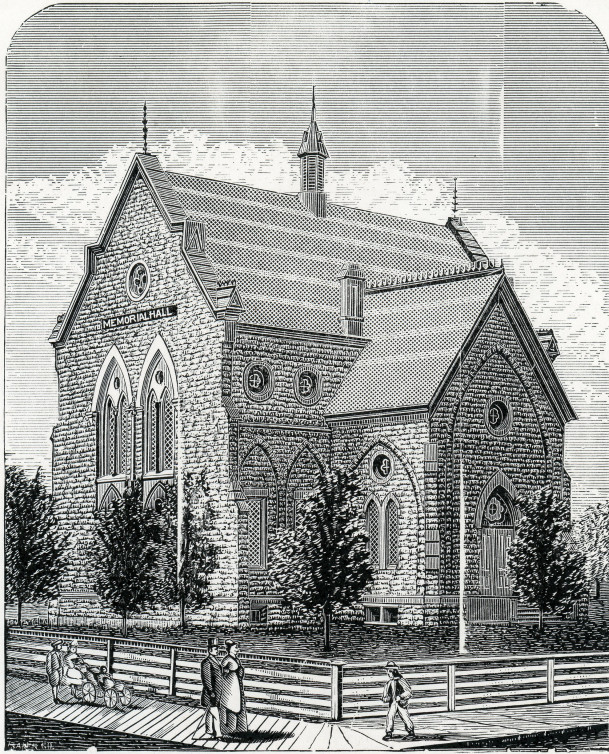 When men, inspired by holier aim,

In loyalty to truth agree,

That holier impulse comes from Thee.

Above this monumental stone

We shrine the names of patriot sons,

And bear to ages, yet unknown,

Their record, with our benisons.

One name alone shall crown the scroll,

And give our lips a loftier theme;

The name that fired the patriot’s soul

To save the Pilgrim soil from shame.

The sighing bondsman’s hope had fled,

Thy Spirit touched the nation, dead,

And lo, a nation stands redeemed.

Above this soil, by freedmen trod,

To honor with a worthy shrine

The patriot and the patriot’s God. 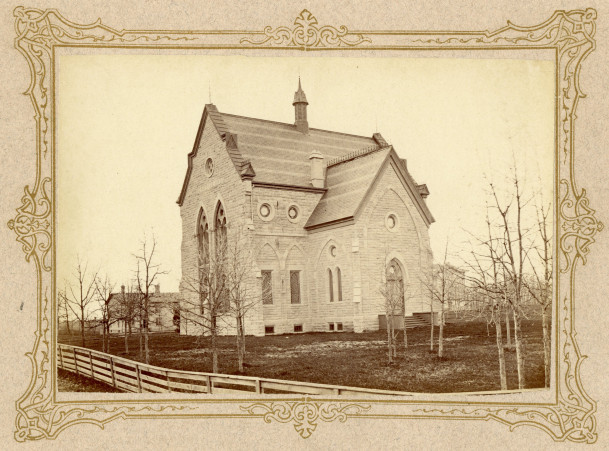 In 1901, only five years after Blaisdell’s passing, Robert Kimball Richardson arrived on campus to teach history. Like several of Beloit College’s founders, Richardson was a Yale graduate, a background which likely led him to identify with the college’s old-guard professors rather than with its younger generation. Richardson was so spellbinding a speaker, legend has it that when the college built Morse-Ingersoll, they included a large lecture hall to accommodate the dozens of students clamoring to take his classes. In honor of this masterful educator, the college later named the room Richardson Auditorium. During his long career he gave numerous speeches and wrote a great variety of articles about Beloit College history. In October 1931, Richardson commemorated the new “recitation hall” in a poem published in the Beloit Alumnus: 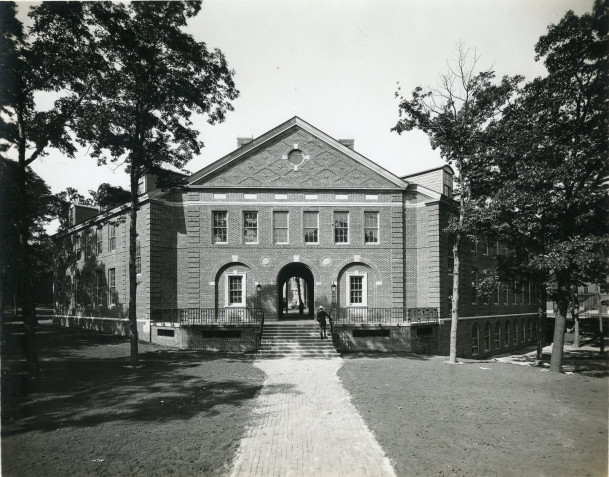 On the corner of College and Emerson Streets,

Where squirrels once nibbled their acorn-meats,

Where Blaisdell and “Zeus” held chat of the

Or on chores academic conferred together,

They’ve builded a hall for the Social Sciences,

Viewed one at a time or in groups and alliances.

Its chairs, hygienic, are screwed to the floor;

The windows are fixed from the left to give light,

And with fans and with flues the air is kept right;

Each “prof” has an office to which to repair,

And may even brew tea if for such he should care.

But far the best thing in this building – it’s true!

A tube whence emerges a glow like rare knowledge,

When the sunshine reflects from the bricks of North

And we sense that the new doth the ancient enfold,

And what’s freshly minted is still the Old Gold. 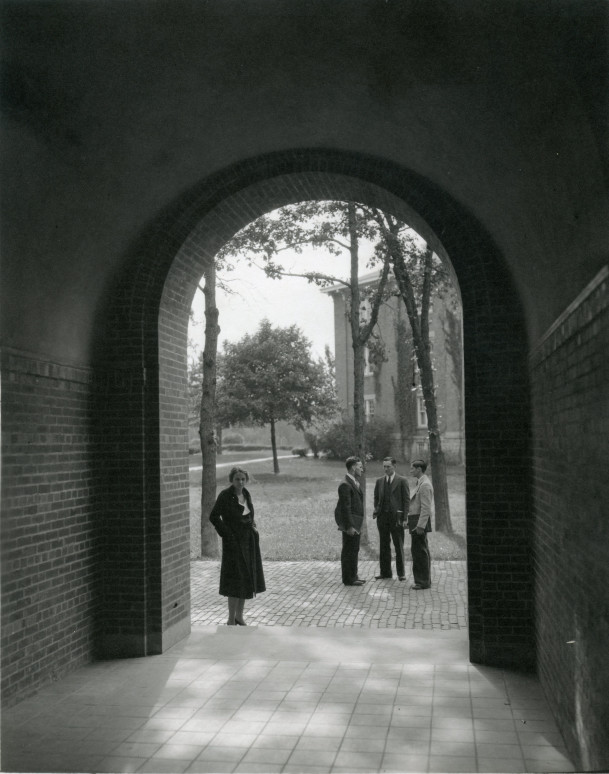