The Stories We Tell

Just as his new book draws on his travels, English professor Chris Fink helps students find and express their personal experiences through their writings and guides them through the publishing process with the Beloit Fiction Journal. 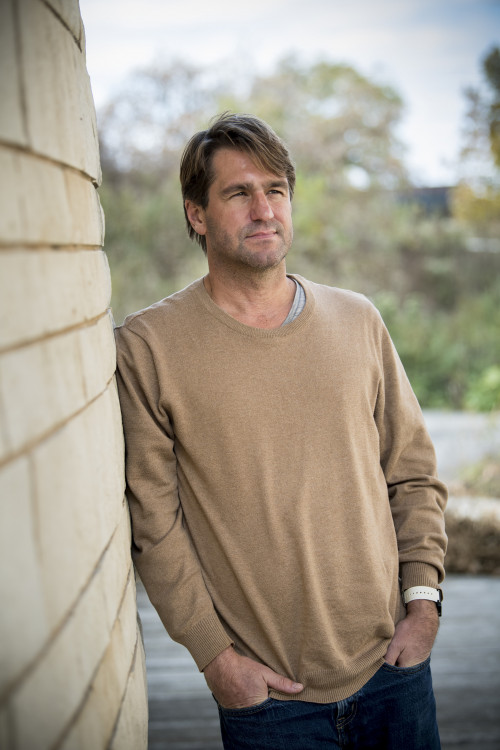 If you put Chris Fink in any location, he’ll write about it.

The English professor’s second book, Add This To The List Of Things That You Are, which was published in September by the University of Wisconsin Press, is a collection of short stories that span the globe, taking traditional Midwesterners and pushing them into testy, unfamiliar situations and lands. Drawing from places he’s traveled, like Arizona, New Zealand, and Spain, Fink uses settings to his advantage and every new terrain becomes another character in each of the stories.

A self-proclaimed “outdoorsman,” Fink spends any time he can hiking, backpacking, or canoeing. And in his creative writing, any locale he visits for an extended period of time produces a story.

“I think to myself, ‘I should be able to milk a story out of this,’” says Fink with a chuckle.

Even with the location set, he says the process of writing a story is to learn how to do the whole thing over again. Every time.

It’s this level of practicality that he hopes to impart to his creative writing students. As editor of the Beloit Fiction Journal, a student-produced journal which receives more than 1,000 submissions from contemporary writers each fall, Fink helps students navigate the publishing process through a course that focuses on the publication. Editorial teams of four comb through submissions before the entire class votes on whether or not each story gets accepted. Less than 1.5 percent of submissions are included, a fact that Fink points out to students.

“For most of my creative writing classes and this [Beloit Fiction Journal] class, it’s writing toward publication and how can we move this toward a professional application. It’s not an exercise in a vacuum,” says Fink. “They can see that the publication process is both collaborative and subjective. It gives them great tools to go out and work in publishing, but it also gives them great tools for publishing their own work.”

Through his teaching, Fink has also been able to give students practical life lessons and combine his two loves: writing and the outdoors. He joined the environmental studies faculty in 2014.

“I wouldn’t have called myself an environmental writer, but it’s always been there. Joining the environmental studies faculty, I was able to think about writing and the outdoors as one part of my life, not separate,” says Fink.

In his Writing Wilderness course, Fink takes students to the Boundary Waters Canoe Area Wilderness, located on the United States and Canadian border in northern Minnesota. Students write about their wilderness experience through poetry and personal essays. As a perk, they learn from Fink’s expertise about wilderness travel and how to fish.

“We understand ourselves through the stories we tell and the stories told about us. I think student writers are most successful when working in this personal terrain, and I help them get there in my classes,” says Fink.

The Genius of the Mackey

While students have a great deal to learn from Beloit’s English faculty, Fink, through his role as a coordinator for the Lois and Willard Mackey Chair in Creative Writing residency, also helps bring distinguished, professional writers to campus to work directly with students. Mackey Chairs, as the writers are commonly referred to, teach for half a semester and give a keynote reading during their time on campus.

“The genius of the Mackey program is [the resident] is not just here to give a reading, handing out pearls of wisdom, and walking away,” he says. “They are in residence. Students have a sustained exposure.”

Fink is pleased that this spring, in celebration of the program’s 30th year, the prominent Chinese-American poet and translator Marilyn Chin will hold Beloit’s Mackey Chair. Chin’s work distills her experiences as a feminist and an Asian American.

“My work is steeped with the themes and travails of exile, loss, and assimilation. What is the loss of country if it were not the loss of self?” she says. Chin will give her keynote reading on April 3, 2020.